The $12,870 Nissan Versa is the least-expensive car sold in America — but a thorough test drive reveals that the Versa is cheap in price only.

I have a passion for inexpensive cars that borders on obsession. It might be hereditary; my father was a maven for turning the lights off and the heat down. But I think my love for “cheap” wheels goes beyond the fond memories of my Dickensian childhood. Fact is anyone can make a good car for $30,000. But delivering a good car under $15k — now that takes some talent.

That’s why the all-new 2013 Nissan Versa is right up my alley. With a list price of $11,750 ($10,990 plus a mandatory $760 destination fee) the Versa is, as of 2013, the least-expensive car sold in America. The old Versa was a cheap-car favorite of mine; not only did it have a low price, but it was roomy, decent to drive, and stayed budget-friendly even when you added up the options. So I was eager to see how the new 2013 Versa would stack up. Perhaps eager isn’t the right word… I may have knocked down a couple of other journalists who were waiting in line for a test drive. All in the interest of serving my VroomGirls.com readers, of course.

At these prices, I’d be happy with a dashboard made of papier-mâché, but the plastics and fabrics that make up the Versa’s interior are as nice as what you’ll find in any given Nissan — the only exception being the seat fabric in the less expensive S model, which looks like the bed-sheets I used in Boy Scout camp. But I like the clear gauges, simple stereo, and three-dial air conditioning controls, which make for distraction-free driving. Although I don’t understand why the Versa S, the only model available with a manual transmission, is also the only one that doesn’t have a tachometer.

The old Nissan Versa was known for its interior space. Though technically a subcompact car, it had enough interior volume to be considered a mid-size. The new Versa has a little less room, but still much more than most in its class. On the minus side, the bottom cushions for both front and back seats are too short to supply good thigh support for most occupants. A plus is that the trunk is quite big at 14.8 cubic feet, but only top-of-the-line SV models get a fold-down rear seat.

When it comes to the Nissan Versa’s safety equipment, Nissan was anything but frugal: Six airbags, antilock brakes and electronic stability control are all standard, as they should be. At the time of writing, neither the government nor the Insurance Institute for Highway Safety had crash-tested the 2013 Versa.

For most cheap cars, this section would be blank. But — surprise, surprise — the top-of-the-line 2013 Nissan Versa is available with a navigation system. An even bigger surprise is that it displays real-time traffic information. Biggest surprise? It costs $700, which is more than a Garmin or a TomTom, but rather cheap for a built-in system.

Again, my expectations were low, and again, the 2013 Nissan Versa surprised me. Under the hood is an eager (but noisy) 109 horsepower 1.6-liter engine. Automatic Versas get a type of transmission called a CVT, which stands for continuously-variable transmission. CVTs sound strange — they don’t change gears the way traditional automatics do — but they deliver better power and fuel economy. In the case of the Versa, the EPA ratings are 30 city/38 highway for the automatic and 27/36 for the manual, making it competitive with other small, inexpensive cars (and pretty darn good considering how much interior room there is on offer). What I like best is the way the Versa goes down the road: The ride is comfortable and the handling is pretty decent. It’s no sports car, but from the way it drives, you’d never guess it’s the least-expensive car sold in America.


So what do you get for under $12k? Quite a bit, actually: The cheapie Versa, called the 1.6 S, has air conditioning and a CD stereo with an auxiliary input jack. That's the good news; the bad news is that an automatic transmission costs $1,770, roughly double what most cars charge. But even at $13,520, the automatic Versa S is still a good deal.


Want more? Okay: The Versa 1.6 SV comes with an automatic transmission and adds power windows, locks and mirrors, remote unlocking, and cruise control, all for $15,320, which is about $1,600 less than a similarly-equipped 2013 Hyundai Accent. And the Versa 1.6 SL is downright decadent, with alloy wheels, Bluetooth, an iPod compatible stereo, and even a bit of chrome trim on the interior, all for $16,320. You can also add a navigation system with real-time traffic for a reasonable $700. For comparison, the entry-level Honda Civic sedan -- which lacks air conditioning, a stereo, or an automatic transmission — lists for $16,575. 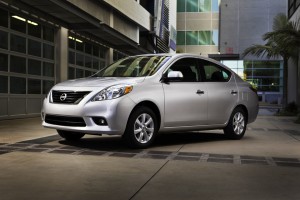 If you're a bargain-hunter, the Versa is a dream come true. It offers tremendous value for under $12k, and despite the pricey automatic transmission, the value continues as you pile on the options. All this, plus it's roomy and good to drive. Okay, so it's ugly — but at the prices Nissan is charging, good looks aren’t even part of the equation.

A lot of car for the money, high-quality interior, simple controls.

Could it be any uglier?