The Nissan Quest is arguably the most unusual minivan on the market — but it’s also the most opulent.

I really like the new Nissan Quest. But before you run out and buy one based on my recommendation, here’s a partial list of other things I like: 1970s disaster movies, cream cheese and jelly sandwiches, the music of William Shatner (TV’s original Captain Kirk), and the city of Rochester, New York. In other words, I have a bit of a taste for the unusual. That is why I am so fond of the Quest.

Why does the Nissan Quest appear so alluring you ask? First, it’s a proper van. Most modern minivans try (and fail) to look swoopy and svelte, but the Quest is unashamedly boxy and van-like. Second reason: The opulence. The Nissan Quest is based on a Japanese-market van called the Elgrand, which Nissan bills as “The King of Minivans.” (My Japanese isn’t very good, so it’s also possible that it is billed as “The Ruling of Footwear.”) The Elgrand sells for up to $70,000 and includes every feature you can think of and several you can’t — no mean feat in a country that invented the heated toilet seat. The North American-market Nissan Quest isn’t as plush or expensive, but it inherits enough of the Elgrand’s lavishness to make its driver feel like royalty.

All Nissan Quests, even the least-expensive Quest S model, are trimmed out like proper luxury cars, with high-quality plastics, lush fabrics, and rich-looking wood trim. Stereo, climate, and navigation systems are neatly compartmentalized on the center stack, and my fingers had an easy time learning their way around the controls. The Quest’s boxy shape provides lots of elbowroom, so I was surprised to learn that the Nissan Quest is actually narrower than competing minivans — it feels bigger and wider on the road, and it can be tricky to maneuver in tight spaces.

Like most minivans, the Nissan Quest uses a 2-2-3 layout with captain’s chairs in the second row and a deep storage well behind the third row, which provides a lot of room for suitcases even when there are butts in all seven seats.

Where the Nissan Quest differs is in how those seats go away. Most minivans have removable second-row seats and a third row that tumbles back into the storage well. Not the Nissan Quest: All seats fold forward and down to form a flat loading floor. This is incredibly handy if you spontaneously get the urge to help people move, but it requires the seats to have smaller cushions mounted closer to the ground. Although there’s no shortage of legroom, I didn’t think the seats themselves were as comfortable or supportive as those in the Toyota Sienna or the Honda Odyssey, which may be a problem as your kids get bigger. And the trick seats yield less space when folded away: The Nissan Quest holds 108.4 cubic feet of your relocating friends’ belongings, while competing vans hold about 150 cubic feet.

Minivans are safer than other cars according to statistics, which seems to have more to do with how carefully they are driven than any built-in safety features. In the case of the Nissan Quest, that includes six airbags, antilock brakes, and electronic stability control. The government has not yet crash-tested the Quest — they’re probably too busy using it to help other countries move — and the Insurance Institute for Highway Safety has only done front and side crash tests. The Quest earned top scores in both, but since IIHS has not performed rear-impact or roof-crush tests, the Quest is not eligible for a Top Safety Pick award.

Among my favorite features are the Quest’s power-sliding doors and proximity key (the key is actually a transmitter, and the van senses when it’s nearby), both standard in all but the base-model Quest S. These are not new technologies, but they work well together: Push a single button on the door handle, and the Quest unlocks itself and slides the door open. This is fantastic when you have a bag of groceries in one arm and a squirming toddler in the other and the last thing you want to be doing is digging the key out of your pocket or purse. Another advantage of the proximity key is that the Nissan Quest can detect whether the key is inside or outside, so it’s virtually impossible to lock your keys in the van.

Nissans tend to be sportier than most Japanese cars, but the Quest’s suspension is tuned for old-school luxury; it’s soft, serene, and admirably quiet, although it still handles well enough in sudden swerves. I generally prefer a sportier drive, but the Quest’s relaxed road manners go nicely with its luxurious interior, and together they make the Nissan Quest a rolling oasis for harried parents.

The front-wheel-drive Nissan Quest is powered by a 265 horsepower 3.5 V6 teamed with a continuously variable automatic transmission (CVT). CVTs don’t shift like a traditional automatic; instead, they allow the engine speed to rise and fall as needed. The sound takes some getting used to, but CVTs provide a smoother ride as well as more power and better fuel economy than regular transmissions. Even so, the Quest’s acceleration is good, not great, and its fuel economy estimates of 18 MPG city/25 MPG highway are similar to other vans.

With pricing starting at $28,560, the Quest S is significantly more expensive than the base-model Dodge Caravan and Toyota Sienna, and only slightly less than the Honda Odyssey LX; that said, the base-model Quest's interior is far nicer, so one can make an argument for the extra cost. On mid-level models — the ones most of us buy — the Quest is priced between the Toyota and the Honda. With all the option boxes checked — leather, power tailgate, navigation, rear-seat entertainment system, big dual-pane sunroof, and more — the Quest tops out at $43,510, less than all of its fully-loaded competitors except for the Chrysler Town & Country. 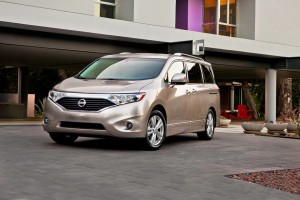 The Quest appeals to my dare-to-be-different nature; I like its unusual styling, soothing interior, and in-your-face van-i-ness. If it weren't for the low-mounted seats, I'd declare it The Perfect Minivan. But if you're trying to shake the "mommy-mobile" image that comes with a van, the Quest might not be right for you. Perhaps I can interest you in a cream cheese and jelly sandwich instead.

One Response to “Nissan Quest”