A minivan for you? Never! You’re the cool mom, the one who wears the cute jeans. Even your kids look a bit more put-together than the rest. You need a family ride that matches your modern style. Enter the all-new Nissan Pathfinder.

Since 1986, when the Nissan Pathfinder was born, it has been the rock crawler, the can-do off-road vehicle that nature lovers, campers and sports addicts choose. But times have changed. Few of us ever go off-road, and more of us really want creature comforts, the latest tech gadgetry and room for family vacations and trips to the ballpark. The 2013 Nissan Pathfinder is longer, wider and roomier than the previous generation Pathfinder. It gives up a bit of its utilitarian ways (somewhat reduced towing capacity and some off-road readiness) in favor of a significantly smoother ride quality. The new Pathfinder combines all the practicality and ease of a minivan but adds the style, capability and panache of a contemporary SUV.

Remember when you had to crawl, like a crazy mom on a jungle gym trying to reach her stuck child, over the second-row seats to get to your kids waaay back in the third row? Ha ha ha, how we laughed at those days. Nissan gives us back our dignity with its EZ Flex seating system. Even with a child seat locked into a second-row seat, the whole unit simply slides forward with the touch of a button, and gives roomy access to the third row. No contortions, no showing granny pants while bending in unnatural ways. And best of all, no need to unlatch the child seat to reach the third row. Genius. And so simple.

And once your kids are back there, the aren’t forgotten. Each row gets its own climate zone, with control settings of their own. And second-row passengers are treated to heated seats! How nice on a frosty morning on the way to school. As for the optional video screens, kids on the left and right sides can play different things. No more fighting over Dora The Explorer or replays of last year’s World Series. Both sides win.

A standard roof rack is ready for hauling extra gear, whether it’s a Christmas tree or a kayak. Also, the 2013 Nissan Pathfinder can tow up to 5,000 pounds, enough for a small camping trailer or even a horse.

With seating for seven, the 2013 Nissan Pathfinder has all the practicality of a minivan. Its seats all lie flat or recline, even in the third row. And they are split, so that passengers can still sit on one side, and long cargo can pass from the tailgate all the way to the front of the cabin.

The cabin is pretty. Details like wood-look trim, loads of chromed metal accents, stylish yet durable fabrics, and dials and gauges made to look like expensive chronographs give a premium feel. Nissan has taken cues and borrowed details from its luxe brand Infiniti and placed them seamlessly into the 2013 Pathfinder’s cockpit. There are soft-touch rubbers and plastics everywhere, which adds to the Pathfinder’s posh atmosphere.

A dual panoramic moonroof allows backseat riders to see the outdoors. And the second row seats slide forward and backwards, so if no one is riding in the third row, the second row can slide all the way back to give passengers there more legroom. In the cargo area, a secret under-floor storage unit is large enough to hide purses, laptops, and spoils from recent shopping excursions from prying eyes of budget-conscious husbands.

The 2013 Nissan Pathfinder uses video technology to aid in safety. An optional Around-View Monitor uses four cameras to see completely around the car, which helps the driver see obstructions as he or she is backing up or parking. There are six airbags, including side airbags that protect all three rows of seats. But six airbags is a minimum these days, as many manufacturers now include up to 10 airbags as standard, including the valuable knee airbags to help in side/frontal collisions. In addition, the 2013 Pathfinder has stability and traction control, which works to keep the vehicle from skidding and spinning, should the SUV lose grip.

Nissan’s proprietary Easy Fill Tire Alert is great. No need to carry a tire pressure gauge in the glove box anymore (and on that note, who carries gloves anymore either?!) Just fill the tire and the vehicle’s horn will beep when it’s full to its prescribed amount. No fear of over or under-filling.

The 2013 Nissan Pathfinder now has unibody construction, which makes all the difference in the vehicle’s ride quality. The new Pathfinder no longer rides like a truck, even though it still holds many truck-like capabilities. In a test drive, the Pathfinder’s handling was excellent, with very little body lean in tight corners. It also showed very stable and energetic acceleration while merging onto highways. I had no problem hitting the gas and catching up to freeway speed.

Even though the 2013 Nissan Pathfinder is larger and wider, it is significantly lighter, thanks to new materials and new low-rolling resistance tires, resulting in a 13 percent improved fuel economy. It comes in both front-wheel drive and 4-wheel drive versions, with the 4-wheel drive model getting only one mpg reduced fuel efficiency (19 mpg city and 25 hwy vs. the FWD model of 20 city/26 hwy.) Not bad, since power is going to all four wheels instead of two. The 2013 Nissan Pathfinder also has a 16 percent improved driving range, meaning fewer trips to the gas station.

Speed-sensitive power steering allows for easy turning in slow-driving situations, like parking lots, with stiffer steering at higher speeds. There’s also a Hill Start Assist feature, which keeps the vehicle from rolling backwards when stopped on a hill.

An optional remote engine start is great for particularly hot or cold mornings…just push a button and start the vehicle’s heating and cooling systems before you get in. 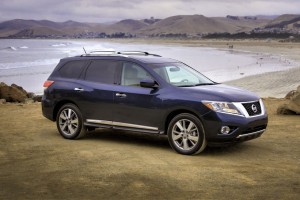 The 2013 Nissan Pathfinder gives families contemporary styling, comfortable room for seven passengers, all the tech wizardry kids and their parents demand, decent fuel economy and even good hauling capacity. It's the one to beat.

Could have more airbags

One Response to “Nissan Pathfinder”