There is a reason that the NV, Nissan’s new full-size commercial van, is so ugly. Actually, there’s a reason for nearly everything in and about the Nissan NV. Before Nissan started hammering out the NV’s sheet metal, they asked van owners exactly what they needed and wanted.

No, the van owners did not tell Nissan that their existing vans were too attractive. But they did say that they didn’t like their vans very much. Vanners don’t have many choices; there’s a heavy import tariff on imported commercial vehicles, and most foreign automakers reserve their North American plants for profitable passenger cars. But Nissan, which has a successful commercial vehicle business in nearly every market except ours, has devoted their factory in Canton, Mississippi; to building a van specifically designed to meets the needs of American owner/operators. The result is the NV, and while it may not be pleasant to look at, it’s wonderful to live with.

The majority of vans have a snub-nosed design for easier maneuverability, which shoves the engine back into the cab. Van drivers told Nissan they hate sharing the cab with the engine “doghouse” as it’s hot, noisy, and takes up precious foot space. So Nissan based the NV on the Titan pickup truck, which moves the engine way up front. It makes for an ugly van, but it also provides a cooler cabin with more space for those hard-working tootsies.

The Nissan NV’s cabin is designed for durability and quick, easy familiarity, although the materials are nice enough to find a place in your family’s SUV. Thoughtful touches abound: A center console big enough for hanging files; a passenger seatback that folds forward to form a portable desk; and don’t forget those optional 120 volt power outlets to run computers and other equipment. Plus van owners complained that because they are constantly in and out of their vans, they either tear or wear the seat fabric ¬– so Nissan upholstered the outer edges in thick, hard wearing vinyl. Smart!

The Nissan NV is available in 1500, 2500 and 3500 models, with cargo capacities ranging from 2,535 lbs to 3,925 lbs. Instead of producing different length vans, Nissan offers low-roof and high-roof models. The low-roof NV provides 234 cubic feet of cargo space, about the same as a short-wheelbase Ford E-series. High-roof models hold 323 cubic feet, significantly more than a long-wheelbase Ford. The cargo floor is 120″ long, 70.2″ wide at the center of the van, and 54.3″ between the wheel wells, which are designed for minimum intrusion, and all NVs have six half-ton D-rings for tying down cargo. High-roof models have 6’3″ of headroom, and with the optional three-prong 120V power outlet, they can be used as a workshop on wheels.

Commercial vans aren’t held to the same safety standards as passenger cars and are rarely subjected to crash tests. The Nissan NV comes with front airbags as standard, and the long nose should provide additional crash protection over other vans. But side airbags are only available as an extra-cost option, and only on the pricier SV models. All NVs get electronic stability control, which can help prevent rolling over — an important consideration for vans, which have a higher center of gravity when loaded. The NV is also the first van to conform to new roof-crush standards mandated for 2017.

I was hoping Nissan would have something to compete with Ford’s Work Solutions — an on-board computer that provides office applications as well as carried inventory listing using radio frequency identification (RFID) tags. Sadly, Nissan doesn’t offer such a system; the most sophisticated gadget on the Nissan NV is an optional navigation system.

I sampled the NV2500 and NV3500, and was blown away by how nicely they drove. The NV2500 is unbelievably comfortable; it drives more like a big SUV than a commercial vehicle. The NV3500, which has a stiffer suspension to accommodate heavier loads, feels a bit more industrial, but it’s still significantly more comfortable than the light-duty Chevrolet Express 1500 that Nissan had on hand for comparison. Despite the long nose, the NV is surprisingly maneuverable, and it’s also significantly quieter than Ford, Chevy and GMC vans. If you have to spend all day in your van, you’ll be much happier with the Nissan.

The Nissan NV is offered with either a 261 horsepower 4-liter V6 or a 317 hp 5.6-liter V8, both of which drive the rear wheels through a 5-speed automatic transmission. Nissan isn’t required to publish fuel economy figures for their full-size vans, and I understand why they don’t: After a half-day of driving in a V8-powered high-roof NV2500, I averaged 12.6 MPG!

The NV is offered in S and SV models. The S is pretty well stripped down, with air conditioning, a two-speaker CD stereo and crank-down windows; power windows and cruise control are optional. SV models come with power windows and locks, a reverse sensing system, 4-speaker stereo, cruise control, and chrome mirrors, bumpers and body trim, with Bluetooth, navigation, and side-curtain airbags among the optional extras.


But when you buy a Nissan NV, you're getting more than just the van: Prices include a basic graphics package or brackets for utility shelves, and several up-fitter packages are also available. Further good news is that in order to sell the NV, Nissan dealers are required to keep an adequate supply of parts, a dedicated NV service bay and offer priority service scheduling for NV customers. 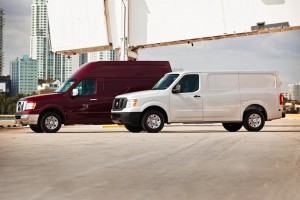 Ugly though it may be, the Nissan NV sets new standards for comfort, convenience and usability in the full-size van market. This is an exceptionally well-thought-out vehicle that is carefully built and attractively priced. If you run a small business, you'll definitely want to check out the Nissan NV.