According to Nissan, the future is now. Right now! And it’s looking decidedly Leaf-y.

The documentary “The Revenge of the Electric Car” reflects the race between Nissan, GM and Tesla Motors to develop an electric vehicle that is economically viable. Despite negative reviews from critics, the piece has a positive ending. All three automakers are (at the time of this writing) successfully selling their EVs.

In the documentary, Carlos Ghosn, CEO of Renault-Nissan, remains remarkably cool as he pushes forward in producing Nissan’s LEAF — the no gas, no tailpipe, 5-person vehicle. The push worked. The emission free Nissan LEAF is ruling. Ghosn noted recently that the company is selling 1,500 Nissan LEAFs a month in the U.S. and more than 1,000 in Japan. “The only problem we have had is supply,” he said.

The only caveat is making enough charging points accessible. If Renault-Nissan tops the projected 1.5 million EV sales by 2016, it’s going to require a push from automakers, energy suppliers and governments to create a widespread network of charging stations. To that end, Nissan North America has reduced the price of its home charging system. Available when you purchase a LEAF at Nissan dealers, the hardware and installation services come in at $1,818 for a typical home installation.

The 5-door hatchback 2013 Nissan LEAF compact has a noticeably low hood flanked by up-slanted blue LED headlights, a large rear spoiler and 5-spoke 16-inch aluminum-alloy wheels. In the rear — crisp corners and no muffler! The design also features chrome door handles, aerodynamic outside mirrors and an airy greenhouse-type interior. Nissan LEAF’s charging point is hidden under a small door located in the front of the vehicle.

Since operation is naturally quiet, the engineers paid extra attention to exterior wind noise adding in technology such as a vortex-shedding, roof-mounted antenna, a quiet-operation windshield wiper motor and sound insulation windshield design.

The display also provides access to the CARWINGS telematics system, which is connected to a global data center, (subscription required, no charge for 36 months). Through CARWINGS, Nissan LEAF drivers are able to use mobile phones to turn on air conditioning and set charging functions remotely, even when the vehicle is powered down. The system also displays a selection of nearby charging stations. An on-board remote-controlled timer can be programmed to recharge the batteries. The center console area includes the palm shifter (inspired by a PC mouse) for the “by wire” drive selector.

Nissan also included a heated steering wheel and heated front and rear seats on the 2012 Nissan Leaf for those who live in chillier climates.

If you have older kids, the LEAF can work but you’ll be crunched. All told, this vehicle seats five and okay, even if your teens can’t stretch out, riding in an EV is uber cool. But my sister-in-law, who is a mother of three kids (9 months-, 4 years- and 8 years-old) that are all in some version of car seats, pointed out that, for her brood, the LEAF wouldn’t work with all of the boosters in place. Also, she is not one for small spaces in cars — with kids kicking your seat and making noise in the back a bigger SUV does it better.

The power: the lithium-ion battery — which generates 107 horsepower and 207 lb-ft of torque — has a reported range of 100 miles on a full charge. The LEAF can be charged up to 80% of its full capacity in 30 minutes in its quick charge port and using a DC fast charger, which comes standard on the more equipped Nissan LEAF SL. Charging at home through a 220V outlet is estimated to take approximately eight hours. The lithium-ion battery pack carries an industry-competitive warranty of eight years or 100,000 miles.

The batteries are located in the floor of the vehicle to provide optimum weight distribution and more cabin space.

Braking for regenerative power: in the Nissan LEAF, braking force is used to re-power the battery, rather than wasting it as in a traditional vehicle. To increase regenerative braking, there’s a driver-controlled Eco mode setting, which can also be used to reduce air conditioning to improve driving range in urban areas.

Approaching Vehicle Sound for Pedestrians: since the LEAF is so quiet, this system is designed to alert pedestrians that a vehicle is approaching. When driving at low speeds (below 16 mph), the system produces a sound from a speaker at the vehicle’s front. When the speed reaches 19 mph, pedestrians are able to hear the car moving and the “approaching sound” automatically turns off. If the vehicle speed drops below 16 mph, the sound comes on again.

This front wheel drive vehicle is a blast to drive. It rides with a light feeling, seamless and quiet, smooth yet peppy and exceedingly responsive with an incredibly pliable turning radius. Simplicity rules here — the MAC-like toggle provides a choice of three gears: rear, neutral and drive. The dash houses a “behavioral screen” for energy consumption monitoring. 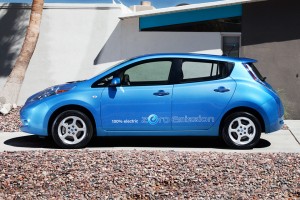 The electric LEAF is a medium sized hatchback, which falls dimensionally in between Nissan Altima and Nissan Versa, with room for five adults and a good-sized cargo area. To be noted: Last year, the LEAF swept car of the year awards for Motor Trend, Automobile magazine and Green Car Journal in the US. Its first year out, the 2011 Nissan LEAF won in the prestigious European Car of the Year and the GreenFleet Electric Vehicle of the Year.

The design, the convenience, the fact that it’s electric.

Size wise, the LEAF can schmooze into any city space.

I can’t leave it. This is a groundbreaking vehicle that’s going to revolutionize the entire industry.

One Response to “Nissan LEAF”