The 2013 Nissan Juke has polarizing looks but our reviewer is a fan, albeit with reservations.

Let me start with a warning: If you buy a 2013 Nissan Juke — and there are a lot of good reasons why you should — it will become the focal point of your life. I took the Juke on a six-day, 1,500 mile road trip, and everywhere I went, everyone wanted to talk about the car and its unusual styling. Crossing from Canada into the US — and I swear I am not making this up — the customs agent demanded, “What is your citizenship?” (Me: “American.”) “Who owns this vehicle?” (“Nissan.”) “Have you told them how ugly it is?” (“Err…”) After deciding that driving a strange-looking Nissan did not constitute a threat to the United States or its citizens, he told me that a fellow agent at that same border crossing had bought a Juke, but after months of ceaseless needling from her co-workers, she traded it in on a Jeep.

If you can ignore the styling — not that I believe that to be even remotely possible — the 2013 Nissan Juke is a rather innovative vehicle, one that aims to blend the best attributes of an SUV (all-weather ability, cargo flexibility) with a small car (easy parking, reasonable fuel economy). By and large, the Juke succeeds; it squeezes through the city like a Smart and tackles winter storms like a Subaru. But boy, does it ever attract attention!

I’m one of those few people who likes the way the Juke looks; with so many look-alike cars on the road, it’s nice to drive something truly unique. I wasn’t quite as enthused about the interior, though. I did appreciate the simple layout of the dashboard, and my test car’s bright red interior trim added some much-needed bling to the drab black plastics. But the big bulging console between the seats annoyed me — it takes up a lot of space and crowds the driver’s right leg. Also, the 2013 Nissan Juke is a bit short on storage cubbies, so I’m sure that space could have been put to better use.

One unusual detail is the car’s air conditioning controls; on all but the cheapest Jukes they also double as driving mode controls. It’s a cool gimmick — press a button and the words on the buttons actually change, like something out of a Harry Potter movie. In CLIMATE mode, the buttons work like any other air conditioner; in D-MODE they let you choose between Sport, Normal and Eco modes and display graphs that show useless information like G-force and turbo boost. (I was hoping this might come in handy during my customs interrogation — “Tell me how much turbo boost you have, or it’s back to the Great White North you go!” — but it didn’t. Bummer.) I’d write this off as an amusing-but-useless gadget, except that the driving mode defaults to Normal every time you start the car. I prefer to drive in Eco or Sport mode — there’s no middle ground for me — so I constantly had to switch the display between CLIMATE and D-MODE, and the novelty quickly wore off.

The 2013 Nissan Juke is better suited for singles and couples than families. The back seat is respectable, given the Juke’s small size, and a baby seat or two would fit just fine — but the Juke only has 10.5 cubic feet of cargo space, which means that carrying a decent-sized baby stroller is out of the question. (Unless you fold down the back seat and leave the baby home, which sort of defeats the purpose.) As a non-kid car, the Nissan Juke makes much more sense; you can carry two adult friends in the back or fold the seatback down for 35.9 cubic feet of hauling space.

The 2013 Nissan Juke comes with six airbags, pretty much the bare minimum these days; many cars now offer at least eight, and some have ten. Crash test scores are a mixed bag: The Insurance Institute for Highway Safety gives the Juke top marks and a Top Safety Pick award, while the Government gives the Nissan Juke just four stars out of five, with a five star rating for side impacts but only three stars for front impacts. Though the Juke is a relatively recent design — it was introduced in 2010 as a 2011 model — it lacks advanced active safety features like blind-spot or lane-departure warning systems.

This is where the Juke really sets itself apart. Under the hood is a relatively small 1.6 liter engine, with a turbocharger that boosts the horsepower to 188. Acceleration is quick and feisty, and the Juke’s sharp steering and tight suspension makes it good fun in the curves, although the firm ride is more like a sports car than an SUV. All-wheel-drive is available, and I put the system to good use during my road trip through snowy upstate New York. Automatic Jukes use a type of transmission called a continuously-variable transmission, or CVT, which uses belts and pulleys instead of regular gears, allowing the engine speed to change as conditions demand. This makes for a very smooth, if rather unusual, driving experience: There are no hard shifts, just a continuous flow of power, but the sound of the engine revs sliding up and down can be a bit disconcerting, and my test Juke had an annoying tendency to accelerate sluggishly away from traffic lights then surge forward when I gave it a bit more gas.

One advantage to the CVT is fuel economy: The automatic all-wheel-drive Nissan Juke I drove is rated at 25 MPG city and 30 MPG highway, and I was impressed by my 28 MPG average. That said, Nissan recommends (but does not require) pricey premium fuel. And the tiny 11.8 gallon fuel tank was frustrating — with only 275 miles or so between fill-ups, I felt like I was stopping for gas every five minutes. Front-wheel-drive Jukes have a larger (13.2 gallon) gas tank and get better fuel economy: 27 MPG city/32 MPG highway with an automatic transmission but only 25/31 with a manual.

Aside from the nifty presto-change-o climate controls, the 2013 Nissan Juke isn’t very big on gizmos. New this year is an updated navigation system that comes bundled with a fancy stereo system with the ominous name of EcoPUNCH. The stereo worked fine, but I thought the navigation system was a little simplistic and slow to program, Given its $1,170 price, I’d rather have a Garmin or a TomTom and pocket the sizable difference. 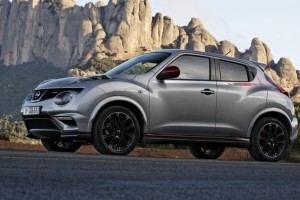 The 2013 Nissan Juke is a very handy vehicle: It parks like a small car, drives like a sports car, and (when equipped with AWD) handles bad weather like an SUV. It isn't cheap, and the hard ride and small gas tank may put some people off, but it's still very likable and capable. Before you buy one, though, have a good think about the attention you'll get -- you may get used to the Juke's styling, but no one else will.