It’s not much to look at. After all, it’s been around for nearly 20 years and though the Nissan Altima has shed its jellybean look from its early days, the exterior styling is still a bit insipid. But mom always told you not to judge a book by its cover. And the Altima proves that old adage is genuine.

Hop in for a test drive, point the car to a major thoroughfare and stomp on the gas pedal. I am certain you’ll do what I did. Let out a squeal as your eyes bug out and you realize you’re a touch frightened. Going to fast? Didn’t expect that? Uh huh, I know. It happened to me, too.

The Altima is Nissan’s answer to the fun and practical combo. It’s thrilling to drive and still spacious enough to be the family’s number one car. It’s a smart choice for couples where one wants performance and the other demands practicality. Plus, it comes in both hybrid and gasoline versions.

The Nissan Altima looks a bit masculine inside, owing to its unadorned surfaces. It’s not tarted up with trim or color breaks; instead large swaths of black make the interior look simple and less feminine. If you dislike too much décor, then you’ll appreciate the simplicity of the Altima.

The backseat is seriously spacious, with plenty of legroom for five adults. My tester had the optional leather seats, which were a touch slippery. And because the backseat bench isn’t shaped or curved, but rather a flat wide surface, my friends slid around a bit. For this reason, I’d opt for the standard cloth, which are less slick and come free with the car.

The same is true for the front seats, which weren’t the most comfortable. Slippery and only lightly bolstered, means there isn’t a lot of torso support. Another demerit, the seats are very firm – almost too firm to be comfortable for long drives.

But the Nissan Altima comes with a good number of standard features: air conditioning with microfilter, tilting and telescoping steering wheel, to ensure a comfortable and proper driving position, and air conditioning vents for rear-seat passengers – a feature that isn’t always included and makes your friends and family nicer on hot days.

My tester came with the upgraded $990 Bose premium audio system, which was a disappointment. The sound was rather tinny and not rich and well-rounded. For that kind of money, I would have expected broad, resonant sound. But I’ve had this issue with Bose in the past and am not a fan of its audio quality. Check it out at the dealership to see how you like it before you buy.

Heated seats work well and warm up quickly, and they’re part of a $1,540 SL package that also includes the leather seats, lumbar support for driver, auto-dimming rearview mirror and air conditioning vents for the back-seat – a feature that makes your passengers less grouchy on hot days.

And though it may seem minor, the center armrest/console is well thought out. It has a huge sliding arm rest that is long enough, and slides forward enough, as to be very useful and comfy for short people (5’3”) like me. Push the console buttons and a shallow tray for coins, parking passes and a phone pops open. Push a second button and the door opens to a much deeper concealed storage tray, with USB and 12V outlets.

I put the Nissan Altima through a nice test run on a mountain road. It handles beautifully, feeling on track in the turns and with very good road feel through the steering wheel. I felt connected to the road, which always makes me feel safe. How a car handles is the first thing I evaluate when judging a car’s safety features. This, to me, is more important than obvious elements like airbags and traction control, since a poor handling car will behave unpredictably and put you in danger long before the airbags engage.

That said, the Nissan Altima comes standard with a good array of equipment, including: driver and front passenger side-impact and roof-mounted side-curtain airbags, and Lower Anchors and Tethers for Children (LATCH), which is crucial for making certain your kid’s safety seat is connected properly.

I know I keep harping on this but it’s true. I love how sporty the Altima has become. The 2.5-liter, 4-cylinder, 175 horsepower engine produces a sizeable 180 lb-feet of torque, which is what produces all of that power when starting from a standstill. That the Nissan Altima sports a 4-cylinder instead of a 6-cylinder engine means it’s less of a gas guzzler.

Also, there’s a much improved connection between driver and road than in the previous generation. Road feel is palpable but not rough or uncomfortable. And steering feels direct, with little play in the wheel. Best of all, this Altima wears a blingy pair of chrome-tipped exhaust pipes to show the world just how sporty you are.

Meanwhile, the Altima’s trunk is massive…you could put the spoils of a major shopping expedition in there. And it comes standard with a spare tire – an unusual feature nowadays, where manufacturers are trying to reduce a car’s weight by doing away with necessary things like this. Thanks, Nissan, for keeping the spare!

The $990 S Premium Audio Package comes with the less-than-stellar Bose system and also a very small 4.3” display screen. Many cars now feature 6” or 7” screens, so this seems a little puny.

The Technology Package ($1,780) upgrades to a 6.5” color touch screen with navigation, real-time traffic and weather from XM, Bluetooth, and a DVD player with video jacks.

Altima’s separate climate control system is wonderfully designed, with oversize dials to change temperature and fan that are easy to maneuver without taking your eyes off the road.

For the 2012 model, NIssan has discontinued producing the Hybrid version of the Altima, instead choosing to focus on the 4- and 6-cylinder gas models. 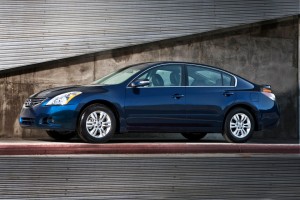 Though I wish styling was updated and more attractive, I can't help but love how the Altima drives. If you're a driver, put the Altima on your shopping list.

That super-quick engine - makes me tingle!

Unbolstered seats that make you slide around