I remember when the first jellybean-shaped Nissan Altima made its debut 20 years ago. A close friend bought it and loved it, but I remember thinking that it was odd looking. What do I know? The Nissan Altima has continued to be a best-selling sedan in America. And deservedly so. It has a powerful engine, quality build, and comfy ride. But until this latest redesign – the fifth-generation Altima – it had not stepped into the realm of all things to all people. That changes now.

The redone 2013 Altima wears contemporary styling. And it is available in several engine sizes, from the gas-sipping 4-cylinder, 2.5L, 182 hp version, to the crazy fun fast 3.6 liter, V6 with 270 hp. All Nissan Altima sedan versions have four doors (though there is a two-door coupe iteration), seat five, and have a massive trunk. Plus, they’re built in Nissan’s two American factories in Mississippi and Tennessee. See? All things to all people.

The comfortable and roomy perforated leather seats are positively luxurious, even Lexus-like! They’re well sculpted to support thighs and torso for long road trips. Nissan calls them zero-gravity seats, and says they were inspired by NASA. You’ll just think they’re comfy. And borrowing from another premium marque, the 2013 Nissan Altima has lit all of its buttons and dials for night driving in cheerful orange, long the signature color of BMW’s interior dashboard lights (and if you look at our logo, VG’s color of choice, too).

A gizmo-loaded steering wheel has buttons to control the cruise control, audio system, onboard data readout, and it has fun paddle shifters for sportier driving. There’s also an optional back-up camera, though we at VroomGirls still believe it’s safest to look where you’re going, rather than rely on technology.

The Altima’s new animated gauge cluster is a four-inch LCD screen, and is engaging and fun. Located right behind the steering wheel so there’s no need to move your head away from the road, it offers useful info like how many miles til empty, MPG consumption, and safety warnings. It also reads “Goodbye” when you turn off the engine. Very Asian.

Backseat riders aren’t second-class passengers in the 2013 Nissan Altima. Your friends and family back there get four cup holders (curious, since there are only three seatbelts), A/C vents (some sedans leave those out, perhaps thinking backseaters deserve to sweat), and plenty of legroom and headroom. The backseats split 60/40 for trunk pass-though of large items.

Finally, a car maker has made tire care easy. The Nissan Altima’s Tire Pressure Monitoring System tells the driver which tire is low on air. Then, when air is injected into the tire, the horn beeps when optimum pressure is reached. No more guesswork. It will even beep several times if the tire is overinflated.

The 2013 Nissan Altima has the usual minimum six airbags (some makes now offer up to 10 airbags!), anti-lock brakes, and a dynamic and traction control system, which helps keep the car from skidding and spinning by controlling brake pressure and engine response. Another great technology is the Altima’s Electronic Brake Force Distribution, which takes note if the rear of the car is heavy with extra passengers, cargo, or even just a full tank of gas, it will add extra power to the rear brakes to help stop the car.

New technology in how gears are shifted has brought smoother shifts, quicker acceleration and improved fuel economy into one. It’s called CVT (continually variable transmission) and it automatically chooses the best gear for optimum fuel efficiency. Another improvement for the 2013 Nissan Altima is the Active Understeer Control, which improves high-speed handling in tight corners.

One thing Nissan does exceptionally well with its sedans is provide a thrilling driving experience, yet without the gut-rattling of a sports car ride. My time in the Altima was a blast. When I stomped the accelerator to merge into highway traffic, it rocketed right along. Brakes were sharp and powerful, steering tight and sure. Absolutely fun and confidence-inducing.

One gripe. My combined city/highway driving over the course of one week was 22.6 mpg, according to the car’s onboard computer. Not bad, and certainly within Nissan’s declared city average, but my driving included plenty of highway miles, so my MPG should have been a bit higher. The Altima is equipped with an 18-gallon fuel tank (rather than the standard 16-gallons), so that means more time between fill-ups.

Are you a techie? The 2013 Nissan Altima plays big in the tech game with the optional NissanConnect and NissanConnect Navigation with Bluetooth phone connectivity features, including hands-free text messaging, Pandora playback, and real-time Google POI search. It’s all easy to use with a little practice and time spent fidgeting with the gadgets from your driveway — don’t experiment on the road, please!

Highway driving is safer because of Altima’s optional Blind Spot Warning, Lane Departure Warning, and Moving Object Detection systems using the rear camera. Should a car move into your blind spot, a light will alert you. And if you get lazy and drift into another car’s lane, the Altima will admonish you for that, too. 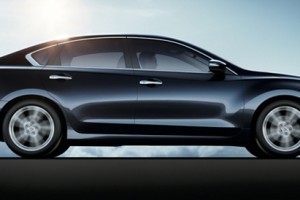 The Altima has been Nissan's best-selling vehicle in America for the past 20 years. It's always been a great car, but now, with pretty styling, fancy luxe features, up-to-the-minute technology, quick acceleration, and improved fuel efficiency, it's downright Vroomy.

Wish I got better than 22 mpg