The 2013 Nissan 370Z is small, fast, and loud — perfect for modern-day samurai, slashing their to-do lists with a smartphone katana.

Like the samurai, the Z series comes with a history. Unlike the way of the samurai, which is hundreds of years old, the ancestors of the Nissan 370Z date back to the 1970s, when once again a shortage of gasoline threatened to kill off fun-to-drive cars. And once again, the Z rises to fill a need and save the day, with a top speed around 150 mph and a highway fuel economy of 26 mpg.

The 2013 Nissan 370Z is a short car — the sills are low, the doors are low, the seats are low. This makes for a sporty look and an excellent center of gravity, but if you’re wearing anything shorter than a proper pair of flowing samurai pants, you’re going to want to wear some tights. Use your samurai grace and dignity to exit and enter the car. Anyone in the passenger seat needs to be aware that the door sill is as low as most curbs are high, which means getting out requires the agility of a ninja.

Once you’re ensconced in the driver’s seat, the interior is purposeful and surprisingly roomy. Nissan didn’t bother with the pretense of rear seats in the 370Z; there are two narrow bins behind the front seats that will hold your Smartphone and purse, but not an actual katana. Not having rear seating means the seats have plenty of room to move up or back — very tall and very short drivers will both find a comfortable position. There’s a surprising level of attention to detail in the cabin; designers added a kneepad to the door panel for stability while furiously cornering on the way to meet your enemy — or on the way to a business meeting. It works either way.

Oh, God no. Not even a little bit.

The 2013 Nissan 370Z has a full complement of safety features, including enough airbags to nearly fill the two-seater cabin, antilock brakes, tire pressure monitoring, and side door guard beams. Computer-age wizardry like dynamic control and traction control keep the wheels in contact with the pavement and the vehicle centered, even if you’re flying toward the next item on your to-do list.

Like every Nissan these days, the 370Z has a push-button start, but it also has an eight-speaker sound system that packs the cockpit with sound. The stereo can be upgraded to a hard-drive-based navigation system with a 7-inch color monitor, 9.3 GB of music storage, iPod interface, streaming audio via Bluetooth, DVD playback, and XM satellite radio capability. You’ll really want the nav system upgrade for the rear-view camera, though. The back window is very small; without the camera showing the rear view, parallel parking would take longer than a Kurosawa epic.

If speeding through town in the Nissan 370Z seems like you’re playing a video game, it might be because it’s actually in Gran Turismo 5 for PlayStation 3. It’s quick and low and comes in colors from the subtle Black Cherry to the eye-popping Monterey Blue of my test car. The V6 engine has a lot of power for a car so small, so you can slice through traffic like a sword.

The engine has a deep, throaty sound, which isn’t always the case in Japanese sports cars. Usually, this would be a plus, but in the 370Z, which seems to be lacking in the sound insulation department, it’s not so great. It’s loud. You’re also sitting only a few inches from the road, so you can hear the sound of the tires rolling against the tarmac. It’s a lot of noise, but the cabin is close, conversation isn’t bad if the radio’s not turned up too loud. There are eight speakers to contend with.

Despite the noise, driving the 2013 Nissan 370Z is a blast. It can dart into traffic and hold its place with much larger vehicles, then pass them with a roar at the earliest opportunity. The 370Z comes with a 6-speed manual transmission that likes high revs and quick starts. A 7-speed automatic is available, if you’re not a stick-shift black belt.

Keep in mind that you need to follow in the samurai tradition of travelling light in the Nissan 370Z. The rear compartments and cargo space are truly tight. Trips to the Asian imports furniture store are out of the question in this car — you can’t even get a flat IKEA box back there.

The Nissan 370Z comes as a coupe or a roadster; the coupe is cheaper. Prices start at $32,690 and go up to the NISMO 370Z, which was gussied up by Nissan’s racing division. Its more powerful engine and race-tuned suspension start at $42,070. My test car was the Nissan 370Z Touring coupe, with 332 horsepower and a few more creature comforts than the base model, like heated seats with lumbar support, which make long-distance driving more palatable. Nissan knows you can’t be a workplace warrior all the time. Price as driven: $41,620, including the optional nav system. 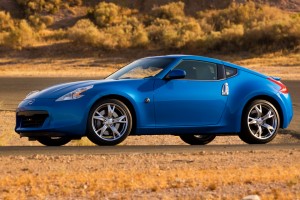 The Nissan 370Z is well designed inside and out, and workplace warriors will appreciate its fine-tuned speed. But it is noisy and a bit expensive for a two-seat car that’s not very versatile.

The compact, curved design looks fast while standing still, like a watered-steel blade. LIKE IT: The optional rear-view camera is worth the money you’ll save in scratched hubs and fender

The optional rear-view camera is worth the money you’ll save in scratched hubs and fenders.

The roar of the engine gets old quickly, like sushi left out in the sun.