Mitsubishi cars are so manly that they practically have chest hair, but the new Mitsubishi Outlander is a crossover utility vehicle that appeals to VroomGirls as well.

You’ll notice a dearth of Mitsubishi reviews on VroomGirls.com. That’s because our site is written for savvy and sophisticated women, while most of Mitsubishi’s cars are designed for young testosterone-charged men. Not that Mitsubishi makes bad cars; on the contrary, their sophisticated all-wheel-drive system is the product of true engineering genius. But Mitsubishis tend to be noisy and unrefined, with interiors that have all the ambiance of a highway rest-stop bathroom. Would I buy a Mitsubishi myself? Yes. Would I recommend one to a VroomGirls reader? No — at least not up until now.

The 2014 Mitsubishi Outlander is an all-new design that represents a sea change for Mitsubishi. Aside from the unoriginal name — a portmanteau of Subaru’s Outback and Toyota’s Highlander — this is a car worthy of Vroomie consideration, with seven seats, a much-improved interior, and an attractive price tag. The styling is a bit awkward, with odd proportions and a rather strange-looking nose, but the size is right and the driving experience is good. And remember that genius all-wheel-drive system I mentioned? The Outlander can be had with that too, and it’s a real boon for those who live where it rains or snows.

For years, Mitsubishi interiors have been beyond bad — a dumping ground for all the cheap plastics and ratty-feeling switchgear that automakers like Toyota and Kia wouldn’t be caught dead using in their own cars. The new Outlander’s cabin is much, much better, with a contemporary styling, smart ergonomics, and materials that feel good under your fingers. Perfect? Not quite — the wood trim on pricier models looks like it came straight from a 1990s rental car, and the start button is hidden behind the windshield-wiper stalk. But the controls are sensibly grouped and nicely laid out, which makes for easy, distraction-free driving. Visibility from the driver’s seat is excellent, and the big side mirrors are a helpful touch. After a few minutes behind the wheel of the Mitsubishi Outlander, I felt as comfortable and familiar as I do in my own car.

Most of the SUVs in this size group are five-seaters; the Outlander’s seven-seat capacity is a rarity. To be fair, this is an “in-a-pinch” seven-seater — the third row eats up most of the cargo space when deployed, and in order to provide enough legroom in the third row, the second-row occupants to slide their seats forward and give up some of theirs. This is no knock against the Mitsubishi Outlander; I applaud Mitsubishi for providing a third-row seat at no charge, but I have to stress its occasional-use nature — the third row has no child-seat anchor points and no side-curtain airbag protection. If you regularly carry six or seven people, you’ll be better served by a larger vehicle.

As a five-seater, the Mitsubishi Outlander works very well. The back seats aren’t as roomy as competing SUVs, but the LATCH child-seat anchor points are clearly marked and easy to use, and cargo space behind the second-row seat is a generous 34.2 cubic feet — enough for all the baby gear you could possibly want to haul. An optional power-operated tailgate makes life with baby and Outlander all that much easier.

The Mitsubishi Outlander’s interior is home to seven airbags, including the standard six (two in front, two torso airbags in the front seats, and a pair of side-curtain airbags that cover the side windows), plus a seventh airbag that protects the drivers knees. Crash tests results weren’t available at the time of writing, but Mitsubishi said their internal tests indicated that the Outlander will get a five-star rating from the federal government and a Top Safety Pick Plus award from the Insurance Institute for Highway Safety.

The Outlander offers a couple of advanced safety features, including a lane-departure warning system that beeps if you drift out of your lane and a collision mitigation system that can automatically apply the brakes if the Outlander is in danger of running into something (say, slow or stopped traffic). Unfortunately, these systems are optional, and only come as part of an option package with non-safety items like leather seats and navigation? The price? Better sit down: $6,100, more than one-forth of the Mitsubishi Outlander’s base price In my opinion, this is just plain wrong — I don’t want to kick off a class war here, but these important features should be offered as an affordable package, not bundled together and priced so high that only well-heeled buyers can afford them.

Mitsubishi offers two engines for the Outlander; the one to get is the 2.4 liter 4-cylinder found in the ES and SE models. It offers a modest 166 horsepower, fine for merging onto the freeway but marginal for passing on two-lane roads. This engine comes with a type of automatic transmission called a continuously-variable transmission, or CVT. Instead of shifting gears, the CVT allows the engine speed to rise and fall as needed. This results in a rather strange soundtrack, a sensation that is amplified (quite literally) by the noisy engine, but the CVT is largely responsible for the Mitsubishi Outlander’s EPA fuel economy estimates of 25 MPG city/31 MPG highway for the front-wheel-drive version and 24 city/29 highway for all-wheel-drive — significantly better than competitors like the Honda CR-V. The top-of-the-line Outlander GT model comes with a V6, but it’s smaller and less powerful than the V6s found in other SUVs and acceleration isn’t much quicker than the 4-cylinder.

The Mitsubishi Outlander is tuned for a car-like driving experience. The ride is firm, the steering feel is excellent, and the curvy-road handling is downright sporty. The Outlander feels agile and light on its feet because it is light on its feet — four-cylinder models tip the scales at a bantam-weight 3,300 lbs. If Weight Watchers was in the car business, they’d use the Outlander as their “after” picture. I’ve mentioned Mitsubishi’s sophisticated all-wheel-drive system, which they call Super All-Wheel Control, or S-AWC. I’m guessing the marketing team back home in Japan doesn’t realize how close that sounds to “suck”, but SAWC-y name aside, this is an excellent system that helps keep the Outlander going over slick roads and improves handling in sudden panic swerves. Too bad it’s not available in the least-expensive versions of the Outlander.

The Outlander offers one of my favorite gadgets: Adaptive cruise control. This system “sees” cars ahead of the Mitsubishi Outlander and automatically slows down to match the speed their speed. Unfortunately, Mitsubishi’s execution is just so-so — the cruise system gives a jerky ride when its trying to follow another car. Fortunately, other optional techno-bits work much better, including the touch-screen navigation system and high-power Rockford-Fosgate stereo system.

The Outlander is available in ES, SE and GT trim, with several option packages. The ES model is inexpensive but fairly basic, while a top-of-the-line GT model with all of the available options and accessories can top $41,000. 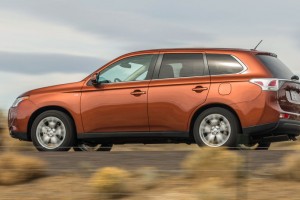 As a long-time Mitsubishi fan, I am both surprised and pleased that the new Outlander is good enough to be taken seriously by mainstream shoppers. But should you buy one? The Outlander is diving into a very competitive segment, and it's hard to argue against the exceptionally well-thought-out Honda CR-V, the ultra-reliable Toyota RAV4, the roomy Chevrolet Equinox, and the handsome Kia Sportage. The Outlander's high-tech all-wheel-drive system and sporty driving experience are points in its favor, but I'm turned off by the way Mitsubishi has bundled their high-tech safety features into an expensive option package. I wouldn't call the Outlander a must-have for Vroomies, but I would suggest a spin past the Mitsubishi dealer to check it out -- if for no other reason than to please the testosterone-charged young man hiding within your savvy and sophisticated soul

One Response to “Mitsubishi Outlander”