They’re a hit in Europe and Japan, and now Americans are about to see what it’s like to tool around town in Mitsubishi’s quiet little electric jelly bean: the Mitsubishi i MiEV

It’s a sad truth that we could have been driving electric cars for more than a century, had auto makers decided to put effort into battery packs sooner rather than later. In 1884, Thomas Parker, the man credited with electrifying the London Underground, hitched a battery to a stagecoach and invented the first electric car. Basically, his efforts went nowhere for a very long time.

The problem all along has been – and continues to be – mileage range. It’s just not possible yet for battery-powered cars to go as far as gasoline-powered vehicles. At the moment, Tesla’s little two-seater gets more than 200 miles to the charge. But mainstream brands like Nissan’s Leaf, a very fine car with a stylish four-seat interior and great driving dynamics, gets only about 75-100 miles on a full charge. Many drivers are frightened that they’ll run out of power before they get home.

And though public charging stations are popping up at malls, airports and office buildings, range anxiety among potential customers plagues the electric car category. It’s possible that you can pull up to a plug at the airport or the mall, and even though there are charging ports, the spots are filled with other EVs. And since the electric vehicle brigade has yet to understand that we need management of these charging stations so that when one vehicle has finished charging, someone can move that car out of the way and park your car in that spot, you might be out of luck.

So that’s the landscape Mitsubishi faces with its i MiEV (the last two letters stand for Electric Vehicle.) It’s a fun little car, roomy enough for four adults and small enough to park nearly anywhere…unless you need a charging port, that is. Its biggest drawback isn’t its size or its lack of creature comforts. It’s that the Environmental Protection Agency (EPA) has rated the Mitsubishi i MiEV as a vehicle with just a 62-mile range. Fine if you’re just going to the market or to run local errands, or maybe you work close to home. But if the i MiEV is to be your primary vehicle, you’ll need to plan ahead when you venture farther than your neighborhood.

By comparison, the Nissan Leaf gets 73 miles to the charge, using the same EPA test. Not a huge difference, except when you take into account that the Leaf is a larger vehicle, with significantly more cargo space, more body and legroom and posh goodies, including a better sound system and a nicer style, for about $4,000 more than the Mitsubishi i MiEV’s top-of-the-line SE model.

I liked the car’s handling, which felt surprisingly stable at highway speed. It corners well, and thanks to its rear-wheel drive set-up, it has a great turning radius. Acceleration is not terrific when the car is in Eco mode. I chose, instead, to keep it in B, which stands for brake. I’ll explain.

The gearshift has three modes of driving: Eco, D (for drive) and B (for brake.) Eco saves on power but really hits you with less-than-stellar vroominess. D is fine but it doesn’t take maximum advantage of the car’s regenerative brakes, which when used, recharge the batteries. When B is selected, it exaggerates the regeneration and accelerates recharging of the batteries. The only downside to this is that you’ll feel the braking power more profoundly. It can be jarring until you get used to it, and then, no biggie.

The Mitsubishi i MiEV meets all American safety standards and has the requisite front airbags plus side curtain airbags. In high-speed freeway driving, the car felt very stable and safe.

You won’t find many creature comforts in the Mitsubishi i MiEV. No glossy mahogany, no chromed touches, no soft-touch materials. But this little bean is not without its charms. Thanks to its extreme cab-forward design, the windshield is pushed all the way over the dashboard, giving ample space in front of the driver and front passenger. The backseat is plenty roomy, with a surprising feeling of openness for the entire cabin.

There’s a driver’s seat heater in the top-of-the-line SE model, but none for the front-seat passenger. Not nice. And I loathe the extensive use of hard plastics (which the company says is made from recycled things but doesn’t list what they are.) Though the car I tested was new, the glove box giggled every time I drove over a bump, and the Mitsubishi i MiEV’s basic fit and finish wasn’t as good as it should have been.

Another odd thing: the ECO, D and B indicators on the gearshift frame were listed on the passenger’s side, rather than the driver’s side, meaning I had to crane my head over the shift knob each time I wanted to change gears. I wondered if the company just used the same shift frame from right-hand drive cars in places like Japan and the UK.

Seats, which are made from plant materials, are super hard and not plush and comfy. Also, the seats are short, so if you’re taller than, say , 5’10”, you might feel leg fatigue with your knees left unsupported. To make the trunk large, the fold-down backseats split 50/50 so one passenger can ride in back and one seat can fold down. The hatchback is useful.

The steering wheel does not tilt or telescope, so it’s difficult to get a proper driving position for drivers of all sizes. And one more thing, when I tried to move my seat, the rails were stuck and it was only after many tries that I was able to move the seat up.

The Mitsubishi i MiEV gauge cluster is simple and easy to read. I like the digital speed readout, and a red needle indicates when you’re in charging mode, eco or consuming power.

As advanced as this vehicle is in its motor, it has a surprising lack of sophistication in regard to consumer electronics. A navigation system is not offered, and forget about linking to real-time traffic, Facebook or voice-commanded texting. A 360-watt, 8-speaker sound system is on the upgraded SE model, but frankly, isn’t worth the money. The sound was tinny and from another era.

Here’s what’s good: A key fob allows the driver to turn on the Mitsubishi i MiEV’s air conditioning and heating remotely, so you can get the car’s climate in good shape before you unplug the car and drain the battery. Also, the fob will set a timer to start charging the battery during the electric company’s least expensive time of evening. That way, you don’t have to stay up past midnight – usually the cheapest time to recharge.

WHAT SHOULD I KNOW ABOUT ELECTRICS?

There are few cool things that are unique to an electric car. Because the vehicle doesn’t use oil, spark plugs or a timing belt in its motor, there’s no need to ever change these things. It’s a money and time saver.

The downside to an electric vehicle (in this case, powered by a lithium ion battery) is that it doesn’t like temperature extremes, so you’re best to drive the car when it’s not over 90 or under 45 degrees. Battery power is seriously hampered when temperatures go crazy, so you’ll get significantly less mileage.

Mitsubishi has set the MSRP of its i electric vehicle at $27,990 for the ES model and $29,990 for its SE version. From each of these, many buyers can eventually subtract $7500 by way of a USA federal tax credit.

Any customer that experiences freezing temperatures should opt for a $150 Cold Zone package that consists of outside heated mirrors and a Warming System for the car’s 16-kWh lithium-ion battery pack. 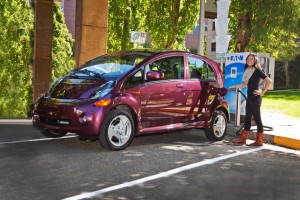 I'm bullish on the concept. The i MiEV is cute, it's easy to operate and to understand. It's even roomy enough inside, though it's so small on the outside you'll have no problem parking in even the tiniest spaces. But the lack of creature comforts, like a tilting / telescoping steering wheel, made it difficult for me to find a comfortable driving position. For the money, I'd expect a bit more perks.

Ride feels stable and safe, even at highway speed

Very uncomfortable seats. The stuffing is hard instead of plush, and the seat cusions are so small, they only support half of the thigh, making it likely you'll get leg fatigue in drives longer than an hour.