The Mazda5 is the smallest and least-expensive minivan on the market. It’s family-friendly, budget-friendly, and best of all, it doesn’t drive like a van.

As VroomGirls.com’s resident male writer, I’ve found that “You should consider a minivan” goes over about as well with my female readers as “Yes, as a matter of fact, that dress does make you look fat.” So as a compromise, I often recommend the Mazda5. The Mazda5 is sort of a mini-minivan — it has all the flexibility and utility of a van, but it still drives like a car, and a thumpin’ good one at that.

The 2013 Mazda5 is like Mary Poppins’ carpet bag: Small on the outside, big on the inside. The Mazda5 is about the same size as a Honda Civic, yet it has roomy seating for six. (Well, roomy seating for four; adults will find the rear-most seats a bit of a squeeze.) The second-row seats have hard-plastic storage bins under the seat cushions, an excellent place for kids to stash their iPods and Nintendos where passing thieves won’t be tempted.

Drivers face a no-nonsense dash made of somber black plastic; it’s not much to look at, but the control layout is nice and simple. I really like the tall driving position and big windshield, which provide excellent sightlines and make the 2013 Mazda5 easier to maneuver than other vans.

The Mazda5’s sliding rear doors may well be the best thing to happen to parenting since the invention of the sedative. They can be opened wide in the narrowest of parking spots, and the second-row seats sit sat the perfect height for hoisting kids into car seats — no need to crane ’em in as you do with a big SUV.

That said, the 2013 Mazda5 does have some disadvantages compared to other minivans. It seats six, not seven or eight like bigger vans, and while the cargo area is big enough for OctoMom’s weekly grocery run, if you need to pack suitcases, you’ll have to fold down at least one of the third-row seats. Many of the high-end family-friendly features available on other minivans — power-operated doors, all-wheel-drive, an automated voice that says “If you don’t stop hitting your brother, I’ll take away your video games for a month!”* — aren’t available on the Mazda5, and only the top-of-the-line models get leather upholstery. Most have cloth, which is harder to keep clean.

* I made that last one up, but if Mazda offered it, I would totally buy it.

Statistically, minivans are the safest vehicles on the roads, which seems to have more to do with how people drive them than their actual safety hardware. The Mazda5 is purely average: Six airbags (including side curtain airbags that protect all three rows of seats), antilock brakes, and electronic stability control, but no new ground-breaking safety technology. The 2013 Mazda5 is an all-new model and hasn’t yet been crash-tested, but other recent Mazda models have had excellent crash-test scores

This is one area where the Mazda5 falls down. Toyota, Honda, Nissan and Chrysler have been battling for years to see who can come up with the most family-friendly gizmos, but Mazda seems to have opted out of the fight. All Mazda5s get a rear air conditioning system, but it’s noisy and only cools the second row seats. Options include satellite radio and a rear-seat DVD player, but nice-to-haves like a navigation system or an iPod-compatible USB port are nowhere to be found.

This is where the 2013 Mazda5 comes into its own: It drives like a car, not a bus. I tested the Mazda5 in Puerto Rico, of all places, where the average road is no wider than your bra strap, so the Five’s small size and excellent all-around visibility really came in handy. In the booming metropolis of San Juan, I could easily squeeze the Mazda5 into parking spots that mid-size SUVs had to pass up. And on curvy mountain roads, I was reminded that “Zoom-Zoom” is more than just an advertising tagline — the Mazda5 is a lot of fun to drive.

The Mazda5’s small size means it can make do with a modestly-sized four-cylinder engine. Even loaded up with my wife, two teen-age kids, and three big suitcases, the Mazda5 had all the power I needed. EPA fuel economy estimates are a car-like 21 MPG city/28 MPG highway, and despite rather challenging conditions — driving in Puerto Rico is a cross between a NASCAR race and a demolition derby — we averaged a budget-friendly 24.2 MPG, far better than most minivans and SUVs I’ve tested.

Along with its small size comes a small price — the Mazda5 Sport starts at just $19,990 ($1,000 more with an automatic transmission), and that price includes power windows, air conditioning, and a decent stereo. The mid-level Mazda5 Touring lists for $21,990, and a top-of-the-range Mazda5 Grand Touring, with leather seats, automatic rain-sensing wipers, and a sunroof, lists for $24,670 — $1,200 cheaper than the least-expensive Toyota Sienna and a whopping four grand less than the base-model Honda Odyssey. 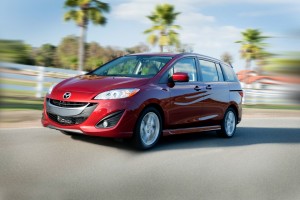 If you can't fathom the thought of driving a minivan, the 2013 Mazda5 might help you make the transition — it has the utility of a minivan but it drives like a car. And by the way, you look great in that dress.