Here’s a car that lives up to its zoom, zoom slogan. The Mazda3 is a peppy little compact car with pizzazz – it’s perfect for a cash-strapped starving student or new grad because it’s fun to drive and won’t break the bank.

If money is tight and you’re searching for a fuel-efficent and practical set of wheels, the Mazda3 fits the bill. Available in a 4-door sedan or 5-door hatchback, it’s not your boring, run-of-the-mill small car. The giant smiling grin at the front end is toned down slightly for 2012. It’s a feature you either love or hate. But most women, including myself, think it’s cute and adds character to the car. Go for a bold colour so its easier to spot in a crowded shopping mall parking lot littered with Mazda3s and Civics in all tints of grey and black. Copper red mica or celestial blue mica will do the trick.

The Mazda3 gets a facelift for 2012. The interior gets some tweaks including new cloth seats and a revised instrument cluster. But personally, it looks a bit cheaper than the last model. At least, the layout is simple and clean — you don’t have to take your eyes off the road to crank up the air conditioning — a girl’s best friend in the summer. Huge HVAC (backlit) dials are easy to find and use — even in the dark.

Inside, there is plenty of room for your friends — 2 in the front; 3 in the rear. Three petite gals can squeeze into the rear seats. But stick to short drives — on longer drives, they’ll be cramped. If you don’t need the rear seats, they fold down easily for extra space. And the hatchback has serious cargo-carrying capacity — with the rear seats down, you’ll be able to fill the back with everything from groceries and shopping bags to furniture and sports equipment.

The Mazda3 isn’t designed for large families – if you’re looking for a big family car go for a Mazda5 or Chevy Orlando. Still, the Mazda3 is a kid-friendly car, if you have one or two in your brood. It comes with child safety rear door locks and LATCH child-safety seat anchors & upper tethers. If you’re making the transition into motherhood, you can get by with one car seat – two would be stretching it. The cloth seats are durable and strong, but if you spill milk or coffee on them they’re difficult to clean. For busy moms, leather seats are easier to maintain, but they cost extra.

My sisters hate small cars – they don’t feel safe in them. From a safety standpoint, they prefer larger crossovers and SUVs. But there’s no reason to believe small cars aren’t safe. The Insurance Institute for Highway Safety (IIHS) named the Mazda3 a 2011 Top Safety Pick. It received top marks in frontal, side, rear, and rollover crash tests. It also comes with numerous safety features such as front airbags, side-impact airbags, curtain airbags, ABS, dynamic stability control, traction control, and a collapsible steering column – standard equipment on all trims. You don’t pay extra for these features – a big bonus for your purse, and one feature Mazda has over competitors.

One of the coolest innovations on Mazda’s front is the SKYACTIV engine, which is new for 2012. The Mazda3 is the first vehicle to don the new engine — but soon, it’ll trickle into other vehicles across the lineup. The engine is more powerful, but with better mileage. More about it, in the driving experience section.

Besides that, at this price, you won’t find many gizmos and gadgets in the Mazda3 – but personally I don’t mind. Who needs fancy distracting gadgets like adaptive cruise control, which automatically applies the brake and throttle as needed to keep a safe distance between you and the vehicle ahead. Sure, its innovative technology, but it’s expensive and when it breaks – good luck fixing it – it’ll cost a fortune. Who needs that headache and extra expense?

But the Mazda3 does have some cool features including rain-sensing windshild wipers. The wipers start automatically with the slightest drop of rain. But this, too, costs extra. It’s part of a Technology Package which includes a navigation system and keyless entry & start system. It costs nearly two grand, so maybe skip it.

As a single woman, I love the automatic door locks. They’re speed sensitive and lock automatically when you start accelerating. It’s a smart safety feature.

First off, I love the fact Mazda has added a new SKYACTIV engine to the Mazda3 for 2012. It’s designed to deliver more power and better fuel economy — you’ll be able to travel up to 40 mpg on the highway — that’s a 15 percent improvement in fuel efficiency which spells extra cash in your pocket. The 4-cylinder engine has 155 horsepower and comes with your choice of a 6-speed manual or 6-speed automatic transmission, which adds $850 to the price. Personally, I’d go with a stick — I love Mazda’s manual transmissions. The clutch and gear shifter are light and easy to use — even when wearing high-heels. It’s not a jarring or heavy clutch — you won’t be thrown back into the seat with each changing gear like you might experience in a Porsche. And besides — guys dig a chick who can drive a stick.

The Mazda3 is no speed demon — you won’t win any races driving to the outlet mall. But it does have enough zoom, zoom to make you smile behind the wheel. It’s fun to drive and merging onto the freeway is a cinch — it has enough guts to make it just the right side of sporty.

The Mazda3 4-door sedan comes in five trims, which are well priced. Another bonus for 2012 is the price — the base model costs less — $15,200 compared to $15,800 for the 2011 version. Sure it’s somewhat bare bones — it comes with power door locks and power windows, but you’ll have to pay extra for a/c and cruise control.

The most expensive sedan is slightly more expensive for 2012 – it costs $22,900 compared to $22,510 for the 2011 version. But it comes with all the bells and whistles including a moonroof, leather seats, heated front seats, keyless entry, and an 8-way power driver’s seat. Navi is extra. So, be careful adding the options. Before you know it, the price jumps to more than $25 grand with Navi and an automatic transmission. And that gets into Mazda6 territory. 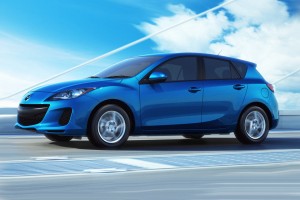 You’ll love the Mazda3 if you’re a cash-strapped student or new grad who wants to ditch the metro and drive to school in an affordable, peppy small car that’s easy to drive everyday of the year.

ChaChing. Mama needs a new pair of shoes – and you’ll be able to afford them after buying the base model – it’s cheap and cheerful.

The smiling front end – it’ll make you grin everytime you spot it.

Skip options like the Navi package – it pushes the price up fast.