With its Zoom-Zoom underpinnings and a starting price that rings in under $15K, what’s not to love in the 2013 Mazda2?

I think small cars often get a bad rap. Granted a lot of them deserve it because of their cheap interiors and hamster-powered engines, but there are several emerging compacts with a huge amount of promise.

When you look at some of the new compacts on the scene, there is one word that immediately springs to mind: Cute. And while “cute” is fine for teenage girls, it might not be a word a professional woman wants to use in describing her car. However, I don’t think the Mazda2 quite falls under the “cute” genre.

With colors like Aquatic Blue Mica and Spirited Green Metallic, you could trend toward “young,” but the slightly flared fenders, hard angles and long sweeping straight line down the side keep it just on the right side of cute.

Though, I do have to admit it’s the front fascia with the smiling grille that keeps Mazda2 close to cute in the first place.

Cute factor aside, one of my favorite things about the 2013 Mazda2 is the engine. You haven’t seen what 100 horsepower can really do until you’ve driven this car. In the land of grunty power and torque, this petite 1.5-liter 4-cylinder engine really has a lot of go, and if it’s powered by hamsters, they’re on steroids.

The great thing about the Mazda2’s compact size and pared down power is the return on your fuel dollar. The manual transmission version brings in a very respectable 29 mpg in the city and 35 mpg on the highway. The automatic numbers drop a little bit, but are still really good at 27 city / 33 hwy.

I had the opportunity to drive both the manual and the automatic and the manual is definitely better. If you can’t operate a manual transmission, just ask the dealership to help you learn. You’ll benefit from improved fuel economy and better control of the power output. The 4-speed (really, still just four speeds in this day and age?) automatic was a little sluggish, plus it adds $1K to the price. The 5-speed manual was nice and smooth.

Being an urban dweller, how easy it is to maneuver a car in tight spaces is a big deal. Obviously, being a sub-compact vehicle, the Mazda2 isn’t going to take up a lot of space. But turning radius and visibility are also really good in this car, and that definitely figures in to overall maneuverability.

But despite the Mazda2’s tiny size, it has a lot of practical cargo space. With the second-row seats up, you’ve got a very usable 13.3 cubic-feet (plenty of space for a week’s worth of groceries), but with the seats down, cargo volume expands to 27.8 cubic-feet. That’s warehouse club store worthy.

You can, in theory put 5 people in this car, but they’d better be slender and short. Let’s face it, this isn’t a carpool machine.

While the interior of the 2013 Mazda2 isn’t completely boring, there isn’t anything terribly memorable or special about it. The fit and finish is fine. The cloth-trimmed seats are fine. And the center stack is well organized and visually interesting. But, if you look at cars like the Fiat 500 with their kitschy body-colored interior dash, the plain blah black isn’t exactly inspired.

A point in the Mazda2’s favor though: The manually adjusted seats are not only comfortable but also provide a good driving position.

When you level up to the Touring model, you do get some red piping on the seats and steering wheel audio controls. But still, not exactly style as it could be. One major disappointment for me of the northern clime: No heated seat option. Again, at this point in the automotive market, all vehicles should offer this either as standard equipment or at least an option.

But there are other interior standard features that are nice to see in a car under $15K. My faves: a pollen filter on the A/C, height adjustable front shoulder belt anchors, audio input jack and a one-touch up/down driver’s window. However, as one of my twitter buddies pointed out, the audio input jack doesn’t provide for proper iPod integration, so you’ll still be futzing with your actual MP3 player rather than being able to use the car’s audio controls.

Though small cars are often practical and affordable, some fear they are tin cans on wheels. But there are important features on the 2013 Mazda2, like front airbags which have weight and seat position sensors–a definite plus for petite drivers.

Other standard safety perks include front side-impact airbags and side-impact air curtains, anti-lock brakes, stability and traction control, side-impact door beams, collapsible steering column and fold-away brake pedal assembly. Because this is such a small car, I was actually surprised that it also included LATCH child-safety seat anchors and child-safety rear door locks. Personally, I don’t know that the 2013 Mazda2 would be my first choice for a family car.


Mazda2 keeps it simple (and affordable!) with just 2 trim levels: Sport $15,515 and Touring ($16,200). The Sport model is well equipped with the basics, but anything extra is definitely reserved for the Touring model. Items you'll get by leveling up: fog lights, leather-wrapped steering wheel, alloy wheels, cruise control, steering wheel audio controls and trip computer. If you bought this car completely tricked out with every whistle and bell, including cargo nets, arm rest and wheel locks, you’d nab it for under $18K. 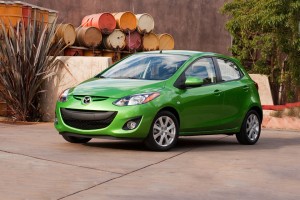 The 2013 Mazda2 is not one of those cars you buy for long luxurious cruising. It's practical, fun to drive with a great engine, cost effective and, yes, a little bit cute. It's great for a single urban dweller, not so great for anyone with a family.

Lack of a heated seat option.