Why compromise? The 2012 Lexus HS 250h combines the best of Lexus luxury with fuel-efficient practicality.

In 1915, Emily Post — yes, she of mind-your-manners fame — drove across country in a drop-cloth convertible. The roads back then were paved. Sometimes. And with less frequency the more she traveled Westward. Speed limits were a joke by today’s standards — between six and 20 mph. And most of the time, they were irrelevant anyway. Either a car’s limited abilities, or pathetic road conditions would take care of most scofflaws even before a waiting policeman could issue a speeding ticket. Yes, they had those, too, back then.

Imagine what Ms Post would say if she could have driven across America in a 2012 Lexus HS 250h. I wonder because Lexus is the gold standard of smooth. It is the brand all others aspire to in the smooth department. And so it is with this thought in my head that I start my evaluation on the HS 250h.

The Lexus HS 250h combines the best of Lexus luxury and fuel-efficient practicality. With an EPA city rating of 35 mpg and 34 hwy, it takes all the guilt out of buying luxe wheels, since too often, choosing luxury means forsaking eco friendliness.

This five-seat sedan goes from 0-60 in 8.4 seconds. Not Danica Patrick fast but who cares? The HS 250h wears a four-cylinder, 187 hp engine. What do you want, speed, super luxury AND fuel efficiency? You can’t have it.

So how does this tie into Emily Post, you ask? The doyenne of manners, had she developed time travel skills and found herself in the Lexus HS 250h, would have felt only a fraction of the millions of potholes she barreled over more than a century ago. The HS 250 is THAT smooth, though its standard equipment doesn’t include time travel mode, as far as I know. That would probably cost a whole lot extra.

The cabin is at once familiar and comfortable, futuristic and stylish. Seats are soft, wide and made for long family drives or to make that grind of a commute more endurable. Everything about the HS 250h’s interior is with comfort and elegance in mind. Leather comes standard, as does dual-zone climate controls, a tilting and telescoping steering wheel so you can find just the right seating position, and a power tilt-and-slide moonroof.

Lexus has come a long way from its early days of hybrid technology. When the company first sold hybrids, they were more powerful versions of the gas-only models, but offered only a mile or two per gallon better fuel economy.

Check out the Lexus HS 250h’s 35 mpg in the city and 34 mpg highway. Very impressive and worth a big tree hug. Three buttons allow for different driving conditions. EV Mode puts the car in electric-only capacity and is great for tooling around parking lots and other slow-speed situations. Eco Mode minimizes your ability to stomp on the gas and floor it. In other words, don’t think you’re going to pass that 18-wheeler in this setting. It also limits the cooling capacity of the climate system. Finally, Power Mode is what you’ll want when that 18-wheeler comes up along side you. And it’s ideal for driving on curvy and mountainous roads that have frequent acceleration and deceleration changes.

Lexus says up to 85 percent the the Lexus HS 250h is recyclable at its end of life. That means the cup holders and door panels you use everyday may one day become someone else’s cup holder and door panels.

Here’s where this baby shines. Lexus Enform is the company’s proprietary communications system but it requires a subscription at added cost. Though all automakers now have telematics in their vehicles, some work better than others.

If you don’t like the hassle of finding a location on your navigation system, Enform will do the work for you. Just call the Response Center and an operator will send your desired location’s coordinates directly into your Nav system. Easy, huh?

Looking for a restaurant? Access the Zagat guide and choose the place you’d like to go. Push a button and your Nav will guide you there. You also get real-time traffic, real-time weather, sports and stocks, emergency roadside service, and automatic collision notification. Should you be involved in an accident, Enform will contact emergency services for you.

Another optional feature is Remote Touch, which looks like a mouse or oversize toggle in the center console. It allows you to page through the media screen for all the car’s functions. Heads-Up Display projects your speed and audio system functions onto the windshield and into your direct field of vision so you don’t have to take your eyes off the road.

The Dynamic Radar Cruise Control allows you to maintain a pre-set safe distance from the car in front of you, without having to go on and off the cruise control system when a car in front of you brakes or accelerates. This does the work for you.

Honestly, our sweet Ms. Post would be on the floor with the vapors by now.

Though Ms. Post no doubt worried about bandits, blowouts from her Pneumatic tires, broken car parts and horrible roads, she probably didn’t have too much concern over impacts with other vehicles, since she was only cruising at a trot.

We, however, are able to move a whole lot faster. Safety equipment is important to all of us. The HS 250h has front, side, rear and knee airbags a go-go — 12 of them to be exact.

Also, the Vehicle Stability Control and Traction Control technologies work well to get drivers out of a spin or skid. The Automatic Collision Notification system for the Lexus HS 250h is offered for free on a one-year trial basis, as is enhanced roadside assistance.

Base price of $39,245, incl. destination fee. Tech Package is $3,900 and comes with Lane Keep Assist, which beeps if you stay from you lane; Dynamic Radar Cruise Control; Heads-Up Display; Park Assist.

Navigation Package is $2,125 which includes a back-up camera, Enform set-up.

Adding the Mark Levinson Audio System with 15 speakers and 6-disc DVD changer will set you back another $1,580. 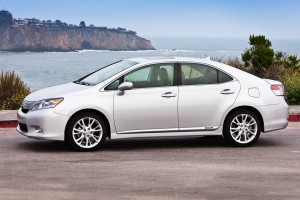 If you've wanted to pare down the family vehicle with a sedan instead of an SUV and you want luxury, the 2012 Lexus HS 250h is a great choice. You'll save at the pump, find it easier to park, and still be able to haul your kids' gear.

Futuristic interior will be stylish for years to come

Tech package is pricey but you'll probably want it anyway