The 2012 Land Rover Range Rover Supercharged is six-figure fast, six-figure luxurious, and six-figure capable — not that you’re ever going to take this lovely SUV off-road. The very idea.

It’s a Range Rover, so you expect a certain level of leather-clad luxury and high-tech wizardry. What you might not expect is the 510-hp V8 engine under the hood and what a difference it makes even to the most mundane driving tasks. It purrs along city streets and roars past semi trucks on the highway.

It also has specific settings for driving through snow, mud, and sand, and one for rock crawling — an activity most people don’t even know about, much less participate in, much, much less in a hundred-thousand-dollar luxury SUV. But the Land Rover Range Rover Superchargedd could kill it in any rock crawl in the country. It can also get you to the auxiliary parking lot at your local ski resort, but that seems pretty tame now, doesn’t it.

The 2012 Land Rover Range Rover Supercharged may be capable of off-road feats you wouldn’t dare do with a roll-cage and a five point harness, but that doesn’t mean the good people of Range Rover will force you to make do with a merely utilitarian SUV. The interior is kitted out in full leather, including the heated steering wheel. The fit of the cockpit is comfortable and roomy, which is great for almost everyone. The very small of stature — physical stature, not community stature — will feel tiny in such a huge vehicle with so much passenger space, despite the adjustable seats and steering wheel.

Anything your family can do, the Land Rover Range Rover Supercharged can do better, whether it’s going to the mall or a hike-in campsite. The LATCH system for child seats is in place in the rear seats, and the wide-opening rear doors make it easy to get the kids in and out. The SUV sits high enough that parents won’t even need to bend over to make sure all the straps are strapped and the sippy cups are in their holders. Rear windows and doors have child locks, and all windows, including the sunroof, have an anti-trap feature, which reverses the direction of the window if it detects something in its way. Say, fingers. Or a dog nose.

The climate control is a triple-zone wonder, so no one need ever argue about who’s hot and who’s cold. Even the rear seats are heated for post-snowboarding comfort (there’s an integrated ski bag, too). The rear cargo space and fold-down seats create enough room for lacrosse sticks or jogging strollers — or tents and internal-frame backpacks, if your family is the far-from-the-maddening-crowd type.

The list of safety features is long in the Range Rover, but most of it is pretty standard-issue these days. Airbags all the way around including driver’s knee, side-impact beams for all doors, child locks, fog lights and tire pressure monitoring. But it does have a few extras you won’t find in most SUVs, like a whiplash reduction system and a heated front windshield for driving in ice or sleet.

Speaking of driving in inclement weather, did I mention the snow setting? I did? Oh. How about sand and mud? You probably won’t need these either, but you could if the mood, or terrain takes you, because the off-road settings in the Range Rover are probably its most impressive piece of tech, so I’m going to make you read about them now.

Just behind the shifter and in front of the tray where you can plug in your iPod is a knob with little pictograms of a Range Rover doing cool things, like driving next to a cactus. Getting the Range Rover to do these things is as easy as turning the knob. No locking hubs, no engaging a separate four-wheel-drive shift. Just turn a knob and go rock crawling.

Should you find yourself on a steep hill facing down, Hill Descent Control will keep you from sliding. If that hill is so steep you can’t see the bottom of the hill over the hood (I’ve done this), the Gradient Release Control will inch … the wheels … safely … to the bottom without much help from you at all. Which is good, because you’ll be too preoccupied with your heart in your throat.

Okay, outdoorsy lecture over. Off to the mall with you, Land Rover Range Rover Supercharged, and your 14-speaker Bowers & Wilkins stereo and your backup camera and your front and rear park distance control.

Okay, so I’ve spent most of this review saying how SUV drivers never take their sport-utility vehicles off-road, not even when they can do all the insane things this Range Rover Supercharged can do.

You know what I did with this SUV? I drove it 500 miles. On a highway. A boring highway.

And I’ll tell you what — it was the best vehicle I could have taken on that trip up and down I-5. It was like bringing my living room with me, if I had a nicer sofa. When my back or legs felt fatigued, I fiddled with the seat settings until I felt relief. I could let the sun beat in through the sunroof and turn on the cooled seats to feel summery but not hot. I played my iPod through the stereo, though I never could convince the nav system I wasn’t in San Francisco.

When traffic slowed, as it always does, through Seattle, I was totally cool with it. I was comfy in my cockpit and knew the supercharged engine would help me make up time on the other side. And boy, did it. All I had to do was ask, and the Range Rover was ready to go. It made me feel a little bad that I didn’t have time to reward it with some mud-flinging off-road driving in the Cascade Mountains.

The 2012 Land Rover Range Rover Supercharged starts at $96,520, but you get a lot of luxury and capability for that. Not to mention the 510 hp from the supercharged engine. The test car I drove had a few options tacked on, like a rear seat entertainment system with headrest monitors and remote, and the Vision Assist Package with blind spot monitors and adaptive front headlights. The blind spot monitor on a car this huge is a lifesaver. 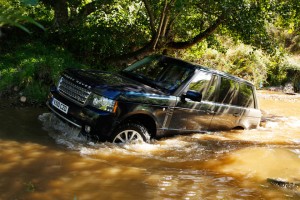 The 2012 Range Rover Supercharged is far more capable than most of us need, but it is so comforting to know what it can do — and comfortable to boot — that it just might be worth that six-figure price tag.

The luxurious interior is to die for.

The off-road capabilities of the Range Rover will make you wish you had a use for them.

The gas mileage, but you guessed that. It’s a dismal 12-mpg in the city and 18 mpg on the highway.