I have to admit, even with an active lifestyle, I don’t often find much use for a vehicle that’s larger than a small wagon or a 5-door hatch. But if I am saddled with a beast, I expect it to fit my lifestyle — and a bike or two — easily. So, when I had the 2011 Land Rover LR4 for a week, I thought it would be the perfect opportunity to haul a couple marathon runners, our gear and a bike. And while we all fit, it was far from easy.

The Land Rover LR4, the second-largest vehicle in the Land Rover lineup (second to the Range Rover by 4 inches in length), is certainly the biggest beast I’ve driven in a while. Whether parking in my condo lot or my sister’s garage at her apartment complex, this full-size SUV took up the entire space. It was tall, long and wide (76.3 inches tall, 190.1 inches long and 85.7 inches wide ), and I found myself ducking reflexively more than once under the concrete ceiling beams in city parking garages. And while the LR4 did fit down narrow alleys and tight city spaces, it was a slow process that involved a few 3-point turns and several close calls.
So, while I could drive this beast in the city, it would not be my first choice. It’s more for the suburban crowd that have multiple children, open spaces, wider roads and the occasional snow storm that will let this monster shine.
But even then, I am not sure this would be my go-to vehicle. My primary complaint: the third row seat. It was fully manual, difficult to figure out and unwieldy to deal with once the process was clear.
The tussle with the aft cargo section/third row occurred after one of our marathon training runs. It was later in the season and it was pitch black after only 8 miles. So, I refused to let another runner ride her bike home without a light. I figured it would be easy enough to fold all the seats flat and simply slide her bike in the rear.
Not so much.
The 2nd-row seats in my Land Rover LR4 went down easy enough with a little grunt work from this 95-pound, 5-foot-tall female. But the 3rd row completely escaped me. In the dim light of the overhead bulb, my running buddies and I tried to follow the picture diagrams. After 20 minutes of clambering over seats, tugging straps and pushing buttons, we gave up. Good thing there was enough space with the 2nd row down to shove her bike in through the back doors.
In a better-lit space we did finally figure it out, but it wasn’t easy and required a little more effort from this 5th percentile female than I had to give … especially after an 8-mile run. I’m not asking for a fully automatic power-operated rear seat, but a simple strap that you can pull while standing at the rear of the vehicle would be preferred to a system that makes you reach in from the back doors.

Previous Land Rovers I’ve had the opportunity to drive have continually disappointed with their interiors. From plastic surfaces to buttons and knobs that fall off, there has never been many positive things to say about the inside view. But on the LR4 tester, I loved the straight-grained walnut inserts and leather seats. The touch points were solid, and I didn’t feel like I could dislodge a knob with the swipe of a finger nail.

So, with that in mind, it might not be the best bet for a family that needs flexible space. If you plan on keeping the seats mostly up for that 3rd row, well then, maybe. But if you are constantly reconfiguring the space to fit both cargo and passengers, I strongly recommend an extended test period so that you can see exactly how this vehicle fits into your lifestyle.
Overall, the Land Rover LR4 seats 7, with 3 in the middle and 2 in the rear. This is great for your turn in the carpool lane. The 2nd row is relatively maneuverable so that kids can access that rear row of seats … And I do mean kids. I fit back there OK, but I’m the size of your average 10-year-old. Larger children or small adults will fit, but it won’t be particularly comfy for a long trip.
One feature the kids will likely appreciate is the cooler box that is standard at the LR4 HSE LUX trim level. It will fit a couple bottles of water and snack bars to tide the crew over between stops on a road trip.

With size and volume, you have to have a power plant that can handle the accompanying weight. At 5,617 pounds, the Land Rover LR4 sets up quite a task for any engine. Luckily, the 5.0-liter, V-8 engine was up to the challenge. Delivering 375 horsepower and 375 pound-feet of torque, the LR4 handled highway merges, passing maneuvers and from-a-stop accelerations with ease.
Of course, this also means fuel economy isn’t great. With city/highway EPA estimates that ring in a 12/17 mpg, you won’t be likely to win any fuel economy badges. I fell somewhere in the 14 mpg combined range for most of my test, but even with significant highway driving, I didn’t come close to touching 17 mpg.
Conquering the jungle (urban & otherwise)

The entire one-week test period took place in the urban wilds of Chicago during the summer. So I didn’t have a lot of (read: any) mud, obstacles, sand, snow or rocky climbs to test the Land Rover LR4’s off-road prowess. But in an urban environment, I can tell you the large side mirrors and rear parking sensors were invaluable. The high ride height and phenomenal driving position also gave me a great view of the road … and any low-lying obstacles that might crop up.
Luckily, I did have a short stint behind the wheel at an off-road course designed by Land Rover at the Road America Race Track in Elkhart Lake, Wis. In addition to some steep climbs and rocky passes, there was one particularly harrowing, stomach-flipping downward drop that really showed what the LR4 can do. Every rock, obstacle and 45-degree descent was handled with skill and agility. While I’d like to take credit as the driver, a lot of it had to do with the Terrain Response and other off-road systems in the SUV.

Even though there is a lot of metal surrounding the Land Rover LR4, I wouldn’t call it a whale like some of the other SUVs I’ve driven. It’s certainly big, and after swapping out of a 2-seat roadster, it did take some getting used to. But the turning radius was tight for its size, and all-around visibility was good.
While this isn’t the nimblest SUV I’ve driven (think Infiniti QX57 for that), the LR4 held its own with some aggressive highway passes. I was able to traverse the pockmarked city streets of Chicago in relative comfort. While I didn’t float over the potholes, I didn’t bite my tongue either. The ride is rugged with just the right amount of smooth.

There are 3 different levels (LR4, HSE and HSE LUX), and they all come with the same V-8 engine, the same 6-speed ZF automatic transmission, the same all-wheel drive powertrain and the same Terrain Response technology. What changes – beyond the price – are some of the standard luxury upgrades at each level: 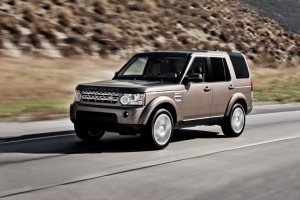 I have to admit a vehicle of these monstrous proportions is difficult for me to understand as a single urban dweller. And even if I did have kids, it wouldn't make for the most convenient family car. So I'm not exactly sure what the bottom line is. Though, I can tell you, if I were stuck in an apocalyptic-like setting with earthquakes to avoid, spur-of-the-moment rivers to ford and zombies to outrun, this would definitely be my car of choice.