Yes, the Kia Sportage is good-looking — but its family-friendly interior, great gas mileage, and low price makes it more than just a pretty face.

Let me start by saying how glad I am that you’re reading my Kia Sportage review. Right away, that tells me that you are a smart, savvy consumer — someone who knows that while Kia may have made its name in bargain-bin cars, it has recently started building world-class vehicles and selling them at cut-rate prices with an epically-long warranty.

Perhaps you’ve heard that the Kia Sportage is one of Kia’s best products yet — a vehicle that can go toe-to-toe with the best CUVs from Japan and America.

Or maybe you really wanted to read about the Honda CR-V, but you accidentally clicked on “K” instead of “H”. Whatever. You’re here, and that’s what counts.

Bottom line: The Kia Sportage is one of my favorite small CUVs. Why am I so bullish on the Sportage? Because it’s roomy, it’s affordable, it’s enjoyable to drive — and it looks really, really cool.

I’m a big fan of the Kia Sportage’s exterior styling, so I was pleased to learn that the racy, futuristic design theme continues on the inside. The wasp-waisted grille is echoed in the shape of the dashboard, and yet the controls are sensibly laid out and easy to learn. The materials are every bit as nice as what you’ll find in a Toyota or a Honda, although I thought the front seats could do with a little more thigh support. Visibility is good in most directions; look over your right shoulder and there is a huge expanse of solid Sportage between the rear-side and back windows, but the big side mirrors compensate quite nicely.

Designing a successful CUV is all about finding the right balance between back seat space and cargo room, without making the thing so enormous that parking it feels like docking a dirigible. The Kia Sportage strikes a good compromise: Though slightly smaller than class-leaders like the Honda CR-V, Toyota RAV-4 and Chevrolet Equinox, the Sportage’s rear-seat head- and leg-room measurements are within an inch of its competitors. That means there’s adequate space for teenage kids and adult friends, and enough maneuvering room to get babies in and out of car seats without mutilating your vertebrae. Where the Sportage falls behind is on cargo space. With 26.1 cubic feet of trunk room, it trails other compact CUVs by a significant margin; most are in the 31 to 38 cubic foot range. Even so, the Kia Sportage has enough room for large suitcases or your quarterly Costco run.

With six airbags, electronic stability control and antilock brakes, the Kia Sportage is average in terms of safety hardware — but its crash-test results are above average. The Sportage earned the best-possible scores in the Insurance Institute for Highway Safety’s front, side, rear, and roof-crush tests, placing it on the IIHS’ Top Safety Pick list.

All Kia Sportages get Bluetooth phone connectivity and an iPod-compatible USB port as standard. The optional navigation system includes SIRIUS Traffic, a subscription-based system that displays real-time traffic and freeway speeds right on the nav system’s map in major metropolitan areas. Most notable is the new Microsoft-based UVO system, which allows voice control of your Bluetooth phone or MP3 player. UVO is a distant relative of Ford’s fantastic SYNC system, although it doesn’t seem to work nearly as well.

The Kia Sportage is designed more like a car than a truck, and that shows in the way it drives — tight, firm, and, well, car-like. The Sportage is slightly smaller and significantly lighter than most of its competition, which aids both parking ease and fuel efficiency.

Base, LX and EX models get a 2.4 liter, four-cylinder engine that produces a healthy 176 horsepower. Most Sportages come with a six-speed automatic transmission, but you can get a six-speed stick shift in the base version. EPA fuel economy estimates with an automatic transmission are a car-like 22 MPG city and 31 MPG highway with front-wheel-drive, and 21 / 28 with the optional all-wheel-drive system.

Many of the Kia Sportage’s competitors offer a big V6 engine for extra juice, but the racy Sportage SX actually gets a smaller engine — a two-liter four-cylinder with a turbocharger, which boosts the little engine’s output to an over-achieving 256 horsepower. And yet fuel economy estimates are similar to the less-powerful engine: 22 MPG city / 27 MPG highway with front-wheel-drive and 21 / 25 with all-wheel-drive. The SX also gets a sport-tuned suspension, which is good fun on a curvy road. But beware the turbo engine’s speed — I was having a ball behind the wheel until I saw red-and-blue flashing lights in my mirror, and even I was surprised when the officer told me he’d clocked me at 75 MPH in a 55 zone. Whoops!

The base-model Sportage starts at just $19,300, which is significantly less than most of its competitors. For that price, you get power windows, mirrors and locks, air conditioning, Bluetooth phone connectivity and a decent stereo, but if you want an automatic transmission, you'll have to shell out $21,600 for the LX model. The range continues through the EX and SX models, with a fully equipped Sportage SX topping out at $32,550. Compared to comparably equipped rivals, the Sportage runs about $2,000 cheaper — the one notable exception being the Hyundai Tucson, which is essentially the same vehicle under its less-attractive skin. 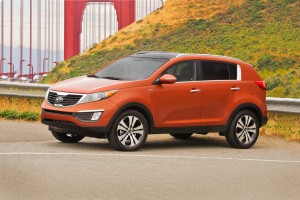 So now you see why I think you're such a smart cookie to have the Kia Sportage on your shopping list. The Sportage is good-looking, enjoyable to drive, and significantly less expensive than the competition, yet it offers similar passenger space (albeit less cargo room) and excellent fuel economy. The only thing it doesn't offer is a proven reputation for quality and durability, but a 5 year/60,000 mile warranty should offer peace of mind until you're done making payments. If you're willing to dive into the unknown, I think the Kia Sportage is a very smart buy.

Plenty of room for a growing family.

One Response to “Kia Sportage”