The Kia Sorento is a handsome, mid-sized sport/utility crossover offering crisp styling, three rows of seating, powerful yet relatively economical engines, up to date safety and electronics gear, and the most comprehensive warranty package in the marketplace.

You may or may not know this little piece of modern history, but women inspired the creation of the crossover/utility vehicle market, both metaphorically and collectively. When sport/utilities became really popular in the mid-1980s, most were based on trucks: All those big Suburbans, Tahoes, Expeditions and such, are built on truck chassis, which is fine because that makes them tough and capable.

Many people want that, but at least as many don’t.  Women made it clear to husbands, sig others, car sales people and car company execs that they want some SUV attributes, like a commanding view of the road, room for plenty of people, ample cargo space, and top notch safety gear. But women said they wanted all that sans a truck-like ride, or a too-high a ride height that creates difficulty getting in and out of tight spaces. Plus, women said they were sick of the lousy gas mileage for which trucks are known. Voila, the invention of the crossover. It gives an SUV-like profile and cargo capability with a more car-like drive, and better gas mileage. That describes this second generation Sorento to a “T.”

Our top of the line 2013 Kia Sorrento SX trim level test car had it all, from faux wood trim to really comfy leather seats (front two rows only).  New on the SX trim for 2012, the three-position front seats have both cooling and heating and the steering wheel heats up for those extra chilly days. There is also a new cloth seat available with special material that resists stains and lowers static.

The instrument panel and dash areas are handsomely designed, and all the knobs, buttons and switches area easy to find and use.  Five years ago, you probably thought of Korean branded cars as cheap and somewhat cheesy.  Not so any more, and certainly not so this one.  This cabin flies first class; if we put you inside and removed any badges or other brand identifiers, you might have guessed you were in a much more expensive European or up level Japanese branded vehicle, or maybe a Lincoln or a Caddy, instead of a Kia.

All of the metal, plastic, leather, carpeting and such looks handsome and feels quality to the touch. There’s plenty of head and legroom for everyone in the first two rows of seats, and the way-back seat isn’t bad; really sized for kids, but still OK for adults on a short run. The cargo area is large, especially with that third row folded flat, and positively cavernous if you fold the second row down as well.

Big, small and modern families with pets and related gear will fit perfectly into the 2013 Kia Sorento. Getting in and out is a breeze, with lots of room for everyone and everything. The seats fold down easily, which is key, and the Kia Sorento can handle nearly any Home Depot or Costco run you have in mind. Kia Sorento SX also has dual zone heating and air conditioning controls, and separate AC controls for the rear areas too. No complaints here.

Kia is proud of its market-competitive safety package, and this one has it all: dual front airbags, front seat mounted side airbags, side curtain airbags protecting the front and second rows, plus front active headrests to protect against whiplash; plus all the electro safety stuff, including anti-lock brakes (ABS), Electronic stability control, traction control, and the much appreciated tire pressure monitoring system. A backup warning system and sonar alerts you to obstructions when you’re in reverse.

Plenty: Our tester had Infinity Surroundsound audio, plus a killer nav system that’s simple to program and dead accurate. We like the large, easy to read screen and back up camera system. The car is pre-wired for SIRIUS satellite audio, including your first three month’s subscription free, plus USB ports and AUX jacks for your music and communication devices. Bluetooth connectivity? Of course, and the hands free microphone and speakers work loud and clear. With the 2012 model, there’s now a UVO hands-free infotainment system available as an option with lots of goodies like HD radio and voice activation.

We let a few confirmed SUV and crossover haters take a turn at 2013 Kia Sorento’s wheel, and they came away impressed. “It drives so easy” was one comment. “This thing is fast” exclaimed one self-proclaimed alpha male who drives a Corvette and scoffs at anything with less than a rumbling V-8 engine and a six-speed stick. Kia Sorrento gives you that commanding road view without standing too tall. The big V-6 purrs at idle, and roars at wide open throttle, with lots of mid range passing punch, and everything you need for long mountain pulls or fast freeway onramps.  Yet there’s nothing trucky about it. The steering feels firm and connected to the road, yet never heavy.  Same with the brakes; lots of stopping power, with a pedal that’s easy to modulate without too much leg.  The Sorrento handles flat and with confidence. And it’s quiet too; very little windnoise, and no road rumble. You’ll love the ride quality; smooth and supple, without getting mushy on rough surfaces. Although we didn’t drive it, Kia now offers the Sorento with a new 2.4-liter 4-Cylinder direct injection engine, the same one used in its popular Optima. This smaller engine actually increases the horsepower to 200, versus the V6’s 175. But the remarkable thing is that it also gets better gas mileage because of this technology. In summary, the Kia Sorrento responds to your every command with confidence, enthusiastically going where you point it, and never giving you any guff in the process.


There are four trim levels offered (probably one too many) in the 2013 Kia Sorrento, and they are base, the next up LX, the mid-level EX, and the top of line SX, with your choice of the base engine – which is a 2.4-liter four cylinder with 175 horsepower; not bad sans a carload of cargo, but taxed with a full load.  We suggest that you step up to the new GDI (gasoline direct-injection) 2.4-liter 4-cylinder that gets 919 horsepower and an EPA estimated 32 mpg.  The base engine and front drive can be had with a 6-speed manual trans, and all others come with a 6-speed automatic.  The base four cylinder Sorrento starts at $23,150, the LX at 23,950, the EX at 26,750, and the V-6 only SX begins at 33,950, all plus an $800 transportation/destination fee. 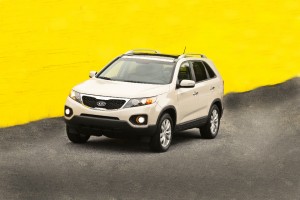 A job well done on KIA’s part. We’d take this SUV over the GM triplets (Chevrolet’s Venture, GMC Acadia, and Buick Enclave) most any day. And while some options are pricey, it’s generally good value too.  Really handy if it’s just you or perfect if your family numbers up to a half dozen.

A handsome, smartly sized crossover that does everything well

Killer warranty package with up to 100,000 mile limited powertrain coverage

One Response to “Kia Sorento”