Time was, you bought a Kia because you had to — but with its high-luxe interior and reasonable price, the new seven-seat 2014 Kia Sorento is an SUV you’ll buy because you want to.

I can pretty much visualize the reaction of my boss, Tara, when she reads the sentence above. I imagine it’ll be similar to what she might do if she found a bug in her black bean chicken. VroomGirls is a classy operation — a reflection of Tara’s taste, which is more Tiffany than Target. Implying that a reasonably-priced Kia Sorento SUV is an aspirational product is not exactly a guaranteed path to career advancement.

But Kia has been working hard to refine its design and image, and the freshly-updated Kia Sorento is the latest vehicle to benefit from this windfall. I’m not saying that the folks at BMW should be shaking in their Roger Viviers; Kia is not a luxury brand, and that shows in the less refined way the 2014 Kia Sorento drives. But the Sorento’s designers spent money where we’d notice — on the things we see and touch when we drive it. The 2014 Kia Sorento may not be a proper luxury vehicle, but it certainly comes close — on the surface, at least.

I had low expectations for the Sorento’s cabin. The Sorento was originally designed at the tail end of Kia’s Bad Old Days, when it made its dashboards out of the same kind of plastic used for Tic Tac boxes. How times have changed! The 2014 Sorento’s interior has been completely redone for the 2014 model year, and the results are like finding a Hermes handbag in the sale rack at Ross.

It starts with the dashboard, which is richly padded and patterned and tastefully trimmed. On all but the base model, the speedometer is actually a video screen nestled between two regular gauges. (Mercedes does the same thing in the $95,000 S-Class, but believe it or not, Kia has actually done a better job integrating the screen into the instrument panel.) The control layout is relatively simple and straightforward, including the optional touch-screen navigation system, which makes for easy familiarity and distraction-free driving — important if you have teen drivers who will be using the Sorento.

The Kia Sorento comes standard with five seats, with optional ($800-$1000) seating for seven. Like most seven seaters, the third row seat is best suited to kids, not just because it’s small, but because you need the agility of a chimpanzee to squeeze back there — although I’d think twice about having anyone use that seat, since the Sorento’s side curtain airbags don’t protect the third row. The second row seat is a much happier place for adults, with big windows, lots of headroom, and — in the top-of-the-line SX-L model — seat heaters. The entry-level 2014 Sorento LX has cloth seats with stain-resistant YES Essentials fabric, while EX and SX models get leather and the SX has a giant dual-pane sunroof that lets back-seaters enjoy a panoramic view of the sky.

With all seven seats in place, the Kia Sorento offers a mere 9.1 cubic feet of cargo space, just enough for a row of grocery bags or an umbrella stroller. In five-seat mode, the Sorento holds a much more useful 36.9 cubic feet, sufficient for bulky suitcases or big dogs. New this year is an optional power-operated tailgate, which you can program to open to less than full height — a useful feature if you have a garage with a low ceiling.

This is an area where the Kia Sorento breaks no new ground. It has the standard six airbags — two in front, two in the front seats, and two side-curtain airbags that provide rollover protection, but only for the first two rows of seats. Last year’s Sorento earned a Top Safety Pick rating from the Insurance Institute of Highway Safety, but only four out of five stars in the Government’s barrier-crash tests. The updated Sorento had not been crash-tested at the time of writing, but it does have some structural changes that could affect its crash performance — hopefully for the better. A blind-spot detection system (which warns you when there are vehicles in your blind spot) is optional, and while the Kia Sorento does offer a backup camera — something every big SUV ought to have — it is not available in the least-expensive LX model.

If the 2014 Sorento shows its deep-discount roots anywhere, it’s in the way it drives. Not that it drives badly; I was very impressed by the ride quality, which is admirably quiet and pleasantly firm (important in a big-ish SUV; driving one shouldn’t make you feel like you’re tottering around on a pair of hooker heels). But the minute you take a turn, the Kia leans like a sapling in a hurricane. It’s not dangerous; the Kia Sorento actually grips the road pretty well in emergency swerves and its electronic stability control system (a computerized safety net that prevents the driver from losing control in dicey situations) keeps it from getting into any real trouble — but that body lean can be a bit disconcerting if you’re used to driving something small and tidy.

All but the least-expensive Sorentos get a 290 horsepower V6 engine that provided strong acceleration and easy passing power. (The LX model gets a 191 horsepower four-cylinder that I imagine will struggle with the Sorento’s nearly-two-ton weight.) But the V6 has a bit of a drinking problem: EPA fuel economy estimates are 18 MPG city/25 MPG highway with front-wheel-drive and 18/24 with all-wheel-drive, and I expect that most 2014 Kia Sorento drivers will see around 20 MPG. Speaking of all-wheel-drive, you’ll want it if you drive where it rains or snows a lot; for Californians like me, the less-expensive (by $1,700) front-wheel-drive version should be fine. (For more information, see VroomGirls University: What Wheel Drive?)

Kia’s high-tech claim to fame is its next-generation UVO eServices infotainment system, which uses your smart phone for internet connectivity, allowing the navigation system to perform Google searches and providing Internet radio. In the event of a crash, UVO eServices uses your phone to call 911, announcing the car’s location through the speakers, while the Parking Minder reminds you where you parked your 2014 Kia Sorento. Now for the bad news: As of early 2013, UVO eServices only works with the iPhone; the app for Android phones is still under development.

As with other Kias, the Sorento features a low price. Base models sticker for under $25k, rather inexpensive for a mid-size SUV, though a seven-seat Sorento with all the goodies will top $40,000. 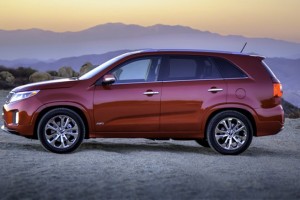 As you can tell, I'm rather impressed by the Sorento. Kia has struck a nice balance between value and luxury, spending lavishly on the high-lux interior while saving money on the greasy parts that many buyers simply don't care about. Though it lacks cutting-edge safety and mechanical features, the Sorento is smoothly styled inside and out and does a convincing imitation of a luxury SUV -- good enough for me, if not for my boss.

One Response to “Kia Sorento”