The Kia Rio is a budget buyer’s dream: A cheap car that looks and feels expensive.

A couple of years ago, I rented the old version of the Kia Rio, and it was everything you’d expect from the $14.99-per-day special: Nasty, plasticky, and completely devoid of style (unless your style is “Urban Cheap”). All it was missing was a yellow sign in the window that said MISER ON BOARD.

Now, I know Kia has been working overtime to improve their products, but even I was a bit surprised at just how nice the all-new 2013 Kia Rio is. Check out the photos — did you ever expect an entry-level car to have so much style? The new Rio is smooth and attractive on the outside, modern and well-built on the inside, and features a high-tech, fuel-efficient engine. And with prices starting at just $14,150, including air conditioning and a decent stereo, the Rio is like finding a Dior dress on the sale rack.

Kia obviously spent some serious money on the Rio’s exterior, so I figured they must have skimped on the interior, and I braced myself for cheap plastics and chintzy seat cloth. Nope — turns out the 2013 Kia Rio is just as nice on the inside as it is on the outside. The dashboard layout is simple and attractive, with high quality materials and straightforward controls that are easy to use without taking your eyes off the road. And there are lots of well-thought-out details, like the iPod-sized bin just below the stereo’s USB input jack. I was a bit disappointed that the base Rio LX model doesn’t get a telescope (in-and-out) adjustment for the steering column — the pricier Kia Rio EX and SX versions do — but I still found it easy to find a suitable driving position. Visibility is pretty good to the front, although a bit limited to the rear; still, after only a few minutes behind the wheel, all felt familiar and comfortable.

You might think that small cars and families don’t mix, but the 2013 Kia Rio does a respectable job. The back seat provides enough room for kids, provided you don’t grow ’em too tall. The Rio can be had as a sedan or a hatchback; if you’re hauling baby gear, you’ll want the Rio sedan. It’s about a foot longer than the hatch, and that translates to a larger trunk floor which will better accommodate your stroller. If you have teenage kids who are learning to drive, consider the hatchback, as it has better rear visibility and is easier to park.

Safety is not a Kia Rio strong suit; it comes with six airbags, even though the competing Toyota Yaris has nine and the Chevrolet Sonic offers ten. The Rio hadn’t been crash tested at the time of writing, but the Hyundai Accent — which is closely related to the Rio under the skin — earned only four out of five stars in government crash tests.

The 2013 Kia Rio is powered by a 1.6 liter, four-cylinder, 138-horsepower engine with direct fuel injection, a high-tech fuel delivery system that extracts more energy from each drop of gasoline, resulting in better gas mileage and lower emissions. It might seem like loads of horsepower for such a small car, but the Rio is not the best choice for women in a hurry — it’ll merge onto the freeway just fine, but don’t plan on racing the car next to you when the light turns green.

The upside: Excellent EPA fuel economy estimates of 30 MPG city and 40 MPG highway. Actually getting 40 MPG requires a steady throttle foot and a healthy respect for the speed limit, but I spent most of my time driving the Kia Rio around town and averaged a respectable 31 MPG. Mind you, I had some help: The Rio has an “ECO” button which basically makes the engine less responsive to the accelerator pedal (unless you floor it, in which case it pours on the coals). I found ECO mode helpful, but my wife found it supremely annoying – she is a woman in a hurry.

You’d expect this section to be blank on such an inexpensive car, right? Surprise! After driving the low-priced 2013 Kia Rio LX model, I tried out the top-of-the-line Rio SX, which offers many of the features I expect to find in a luxury car: Heated leather seats, navigation with real-time traffic, iPod-compatible stereo, automatic headlights, a sunroof, and a rear-view camera. It even had a proximity key, a nifty gadget that allows the driver to unlock the doors and start the engine without taking the key out of her pocket or purse. This particular Kia Rio SX sedan was priced at $20,450, but that’s still nearly $4,000 less than a similarly-equipped Honda Civic.

Rio LX: $14,150 for the sedan, $14,350 for the hatcback. This is the basic Rio, although "basic" is a relative term; it includes air conditioning, a stereo with USB and auxiliary input jacks, and XM satellite radio -- along with crank-down windows, manual door locks, "thumbprint" side mirrors (you adjust them by pressing on the mirror with your thumb), and limited color choices. This is the only Rio offered with a stick-shift; an automatic transmission costs $1,100 more. A $1,000 Power Package, only offered on automatic cars, adds power windows and locks with remote unlocking. Rio EX: $17,050 for the sedan, $17,250 for the hatchback Expected to be the most popular Rio, the EX comes with an automatic transmission, power windows, locks and mirrors, Bluetooth speakerphone, telescoping steering column, and a center console with storage box. A $1,000 Convenience Package adds alloy wheels, automatic headlights, backup camera, leather-wrapped steering wheel and shifter, fog lights, illuminated visor mirrors, a soft-touch dash, and a voice-controlled stereo system. Rio SX: $18,250 for the sedan, $18,450 for the hatchback. The SX gets everything in the Rio EX with Convenience Pacakge, plus bigger wheels, LED taillights, a fancier gauge cluster, and a sport-tuned suspension, but only comes with a black interior (other models offer black or beige). The $2,200 Premium Package adds leather upholstery, heated front seats, navigation with real-time traffic info, a sunroof, and keyless push-button ignition. 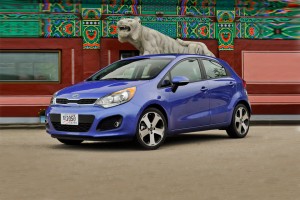 The 2012 Kia Rio is a world away from that cheap old Rio I rented. It's stylsh on the outside, well appointed on the inside, practical and comfortable to drive. It's certainly budget friendly, with its low price and high fuel economy. And the top-of-the-line SX model allows you to get advanced features like heated leather seats and built-in navigation for less money than a bare-bones mid-sized car. One legitimate concern is reliability. Kia's early products were not particularly robust, but the new Rio comes with an epic 5 year/60,000 mile warranty, which means you probably won't have to worry about major repairs (aside from wear items like brakes and tires) while you're still making payments. And if you keep your Rio longer, there's a 10 year/100,000 mile warranty on the engine, transmission, and driveline.