Kia has just redesigned it’s mid-size Optima, and if you associate Kia with cheap cars — as you have every reason to do — the new Optima is going to come as a pleasant surprise.

Please forgive me for the terribly distasteful metaphor that is about to follow, but this is the best way I can think of to introduce the Kia Optima. Imagine you’re taking your dog for a walk. He squats to do his business, and instead of the usual pile of unpleasantness, he produces a pair of Tiffany diamond earrings.

That is what is happening at Kia.

For more than 15 years, this South Korean automaker produced cars that disappointed most automotive shoppers. But just look at Kia now. The new Kia Optima is so good that I couldn’t help but wonder if perhaps they secretly hired Toyota or Honda to design it. A couple of years back, the Optima was a great choice if you couldn’t afford a Toyota Camry. Now it’s a great choice, period.

I love the Kia Optima’s clean, contemporary styling, and that theme continues on the inside; the interior looks as if it was designed by Ikea. (Fortunately, it wasn’t. Can you imagine having to assemble the Optima yourself with that stupid little Allen wrench?) Old-school Kias were lined with ridiculously cheap plastics that you could scar with your fingernail, but the new Optima’s cabin is built with the same grade of materials you’ll find in a Toyota. Everything I touched felt expensive.

I prefer an uncomplicated control layout — being a guy, I can only concentrate on 3 things at once, fewer if one of them is wearing tight jeans — so I liked the Optima’s simple air conditioning controls, but I thought the stereo could do with a few less buttons. My biggest complaint, however, is the visibility. It’s not bad, but the steeply-raked windshield and high door sills make the Optima feel big and a bit ungainly.

Though the Kia Optima is sold as a mid-size car, the EPA classifies it as a large car based on its interior volume. (I’ve never figured out why the EPA bothers to measure interior volume. Shouldn’t they be out cleaning up toxic spills or preventing factories from spewing pollution into the air?) The Optima has a big back seat and its 15.4 cubic foot trunk is near the top of its class – large enough to make an Ikea run – so it’s about as family-friendly as a mid-size sedan can get.

Like most cars on the market today, the Optima gets six airbags (seven if my mother-in-law comes along. Just kidding, Camille!), antilock brakes, and electronic stability control. It’s one of several mid-size sedans to have won a Best Safety Pick award from the Insurance Institute of Highway Safety, which means it performed well in front, side, rear, and roof-crush impacts.

All Kia Optimas get Bluetooth phone connectivity, and the optional navigation system displays real-time traffic in big cities. Both are nice-to-haves, but hardly cutting-edge.

As it turns out, the Optima’s niftiest technology lives under the hood. The standard 2.4 liter engine uses direct fuel injection, a high-tech system that increases the Optima’s fuel economy to small-car levels while reducing pollution from the tailpipe. And instead of an optional V6, the Optima offers a four-cylinder with a turbocharger, a device that boosts power by forcing more air and fuel into the engine under acceleration. Under gentle cruising, the turbocharger stays dormant, so the engine uses less fuel — in fact, it’s just as fuel efficient as the non-turbo engine on the highway.

Unfortunately, this is not the Kia Optima’s strong suit. It doesn’t drive badly, but in an effort to make the Optima feel sporty, Kia has made the ride a bit too hard and the steering a bit too heavy, yet it doesn’t give the same amount of road feel as a properly sporty car.

But I do really like the engines. The standard 2.4 liter 4-cylinder delivers 200 horsepower, which is quite a lot for its size, and its EPA fuel economy ratings are stellar — 24 MPG city/34 MPG highway with an automatic transmission. (That said, if you have a healthy disregard for posted speed limits, you’ll have a hard time matching the highway figure.) And the 274 horsepower turbocharged engine works as advertised; it’s as quick as a V6 and will also get 34 MPG on the highway provided you can keep the accelerator off the floor.

I'm a cheapskate at heart, which is one of the reasons I really love the Optima. Prices start at $19,950 for an Optima LX with air conditioning, power windows, and a 6-speed manual transmission. If you're one of the 92% of Americans who buy automatic cars, you're looking at $21,450; the extra $1,500 includes the automatic transmission plus alloy wheels, cruise control, keyless entry, an adjustable steering column, and floor mats. For comparison, a similarly-equipped Honda Accord will cost you $1,500 more.

Want toys? The Optima offers lots: Leather upholstery, heated and cooled seats, a massive dual-pane sunroof, and navigation, among others. I drove an Optima EX with the non-turbo engine and everything but nav, and I challenged my wife to guess the price. (After years of living with me, she's pretty good.) She guessed $31 grand — but our test car stickered for just $27,950, bringing to three the number of times during our marriage when my wife has been wrong. Coincidentally, the Optima tops out at $31,100, which, in yet another coincidence, is $1,500 less than a top-of-the-line Accord. And even at that price, the Accord doesn't include as many creature comforts. That's not a coincidence; that's Kia. 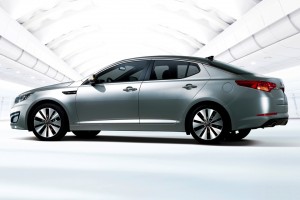 I'm amazed at how good the new Kia Optima has become. The Optima used to be cheap in all respects; today it's cheap in price only. Great style, great quality, great value -- what else could you want? Actually, there is one other thing I want, and it's going to require taking my dog for a walk. My wife's birthday is coming up, and if Kia can surprise me this much, maybe the dog will, too.

Sleek, contemporary styling inside and out.

Great fuel economy (if you can exercise restraint), long warranty.

Visibility could be better.