Once the darling of the low-priced segment, Kia is moving up in the world with its new Kia Cadenza — a big, beautiful luxury sedan that offers a lot of gadgets for a reasonable price.

Is the Kia Cadenza the right car for you? Well, I can tell you that it sure solves a big problem for me. I’ve had several people ask me how they can get a premium luxury car without the premium luxury price. My usual answer is to either buy used or lease. But buying used means you don’t get the latest and greatest gizmos, and leasing means you have to get a new car (and make another down payment) after three years or so.

The Kia Cadenza is the solution I have been looking for. It is a generously-sized sedan with lots of high-tech luxury features, and while it isn’t exactly cheap, it certainly isn’t expensive — at least, not compared to comparably-sized, comparably-equipped cars from more prestigious brands. The Kia Cadenza is closely related to the Hyundai Azera (Kia is a subdivision of Hyundai), though the two differ in their approach: The Azera is more traditional (think Jaguar or Buick) while the Cadenza is more contemporary (think Audi or BMW).

Kia has made some major improvements to their interior designs in the last two years. Much as I like what they’ve done, the Cadenza’s cabin isn’t my favorite; the materials and switchgear are of excellent quality, but the ergonomics leave a bit to be desired. Switches and buttons seemed to have been placed for design rather than functionality, and the rows of look-alike buttons make it difficult to do simple things like turning down the fan or changing tracks on the CD player.

The Cadenza’s driving position is quite good; the driver’s seat offers multiple adjustments and you can even get a power-adjustable steering column with memory settings (a nice feature if you share your car with a partner). But your front passenger won’t fare so well: The right-front seat sits low to the floor and has no height or lumbar adjustment. I’m not particularly tall — 5’6″ — and sitting in the right seat made me feel like a little kid in his mom’s car.

The Kia Cadenza wasn’t designed for families, per se, but it does a fine job thanks to a generously-sized back seat, easy-to-clean leather interior, and a big (15.8 cubic foot) trunk that will easily accommodate strollers and other bulky baby gear.

The Cadenza is equipped with eight airbags: Two in front, a pair of seat-mounted side airbags for both front and back seats, and two-row side curtain airbags. (Most cars have six airbags, omitting the rear seat-mounted side airbags.) Strangely, it lacks a knee airbag, which is featured on Hyundai’s version of the car, the Azera. The Kia Cadenza is a brand-new model and had not been crash-tested at the time of writing, but Kia says its internal tests indicate that the Cadenza will most likely score five stars in the Government’s crash tests. In terms of active safety features, the Cadenza gets a rear-view backup camera as standard, while lane-departure and blind-spot warning systems are optional.

The Cadenza is powered by a 3.3 liter V6 engine that produces 293 horsepower. This engine offers a nice balance of power and fuel economy; acceleration is smooth and responsive, while EPA fuel economy estimates are 19 MPG city and 28 MPG highway — not the best compared to its competitors, but very reasonable for such a big, comfortable car. Keep in mind that the Kia Cadenza runs on cheap 87-octane fuel; many of its 300-ish horsepower competitors require expensive premium gas.

Given its role as a luxury yacht, I was expecting the Cadenza to offer a smooth and serene ride, and that it did. But I was surprised by the handling, and especially the steering feel — this has been a weak point in Kia’s most recent cars, but the Kia Cadenza feels almost sporty in the curves. It’s no BMW, but it responds crisply in sudden swerves and panic braking.

The Kia Cadenza comes standard with Kia’s UVO eServices. (UVO, Kia says, is short for for “Your Voice.” Um… seriously?) UVO not only provides voice recognition for your phone and media player, but it also uses the voice and data connection from your smart phone to provide a series of services, including the all-important ability to dial 911 and transmit the car’s location in the event of an airbag deployment. UVO also has parental controls which will send a text message if the car exceeds a certain speed or drives outside of a pre-defined geographic area — provided your tech-savvy teen driver doesn’t disable the app or disconnect the phone, that is.

Other gadgets include a new adaptive cruise control system, which detects cars in front of the Cadenza and automatically slows down to match their speed. It can even bring the car to a complete halt without any driver intervention. Cool!

The Kia Cadenza is available in a single model, with two option bundles. As with other Korean cars, the base-model Cadenza offers a lot of equipment for the money, although once you add on those option packages, the Cadenza is as expensive as its American and Japanese rivals. 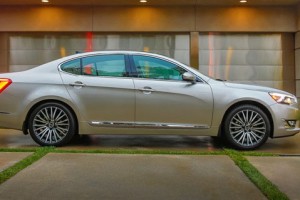 The Kia Cadenza is certainly a car that I've been looking for; it is big, comfortable, and luxurious, and offers lots of high-end luxury features without the high-end luxury price. The problem is that Kia isn't the only manufacturer moving in that direction, and the Cadenza faces some stiff competition. Chief among them is the Toyota Avalon, which offers many of the same techno-gizmos (along with legendary reliability) at a similar price. I'm partial to the Hyundai Azera, which is a bit less tech-savvy but has a more traditional and luxurious interior, but I also like the American-built Chevrolet Impala, which has been completely redesigned for 2014 and rivals the Kia with its high-lux interior and smart electronics. If I'm honest, the Cadenza wouldn't be my first choice, but it is well worth a look.

One Response to “Kia Cadenza”