The 2013 Jeep Wrangler is unlike anything on the road, and it can take you places even your own legs can’t. It’s the perfect set of wheels to tackle the Rubicon Trail, but what if you only need to drive to work?

Buying a Jeep Wrangler is a bit like buying a pair of Christian Louboutin heels: You look fantastic, but getting around becomes a lot more challenging. The Jeep Wrangler is riddled with inconveniences, because it has always been first and foremost a hard-core off-road machine. I’m not talking about dirt roads or driving over the occasional fallen tree branch — the Wrangler is designed to crawl over terrain that is too steep or uneven to walk. But as with those Louboutin heels, the Wrangler makes those quick trips to the supermarket a bit more difficult.

Back when the Jeep was invented — we’re talking World War II — it was the epitome of simplicity: A frame, an engine, some seats, and just enough bodywork to protect the greasy bits. The dashboard was just a couple of sheets of metal. Today’s cars are a lot more complex — airbags, air conditioning, stereos, stuff like that — and packing it all in to the Wrangler’s distinctive boxy shape makes for a peculiar interior. I felt like I was sitting right on top of the steering wheel and the dashboard, with the windshield sitting just ahead of my eyes like a giant set of spectacles. It wasn’t uncomfortable, just unusual. The controls are mostly well located and easy to use, but the materials are designed for all-weather durability rather than ambiance and luxury.

One of the great things about the 2013 Jeep Wrangler is that it makes a terrific convertible. With its near-vertical windows and big, burly roll bar, drivers sit in the open air, rather than in the eaves of the windshield as in most modern convertibles. You can even remove the doors if you are so inclined. The standard soft top is the easiest path to the sun, although it’s a pain to fold down and lets in lots of wind noise with the top up. The optional hard top has bulky removable roof panels over the front seats; the rear section can be removed with simple tools, but you’ll need to leave it behind in the garage.

The two-door Jeep Wrangler I drove was about as family-friendly as a day pass to an S&M club. Access to the back seats is awkward and there’s not much cargo space. The longer four-door Wrangler Unlimited is only a partial solution: The back seat is roomier and easier to access, but the doors don’t hold themselves open (they’ll smack you in the butt as you strap your baby into her car seat) and the cargo area is barely big enough for a decent-sized stroller. If you’re a family gal who really wants a Jeep Wrangler, I’d suggest waiting until the kids are big enough to walk on their own.

Safety is not the Wrangler’s strong suit, either. While most vehicles have six to ten airbags, the Wrangler comes with just two front airbags as standard. Front-seat-mounted side airbags are optional ($495) and side curtain airbags, which provide protection in a rollover, are not even offered; instead, the Wrangler has an exceptionally stout roll bar that cages the passenger compartment. There’s a reason for the lack airbags: Jeep enthusiasts use their Wranglers for hard-core low-speed rock-climbing, where a gentle roll-over is almost a non-event. Without an airbag deployment, they can simply push the Wrangler back onto its wheels and try again. But if you’re driving on-road, you’ll want the extra protection that side airbags provide.

The Federal Government has not crash-tested the 2013 Jeep Wrangler, though they gave it only 3 out of 5 stars for rollover potential — no surprise given its narrow stance, short wheelbase (distance between the front and back wheels) and big, bouncy off-road suspension. The Insurance Institute for Highway Safety gave the Wrangler a best-possible “Good” rating for front crashes, but side impacts without the optional side airbags were “Poor” (the worst rating) for the 2-door and “Marginal” (second-worst) for the 4-door.

The 2013 Jeep Wrangler is powered by a 285 horsepower 3.6 liter V6. Acceleration is impressive if you really step on it, but gas mileage is abysmal: EPA ratings are 17 MPG city and 21 MPG highway for both manual and automatic transmissions. I barely managed 15 MPG in a week of mixed driving, and I rarely drove faster than the posted limit.

The Wrangler’s suspension is designed for serious off-roading, with lots of up-and-down travel and fairly stiff shock absorbers. The steering is imprecise, the handling is clumsy, and the ride, while not as abusive as older versions of the Wrangler, is not exactly comfortable. Emergency swerves are dicey at best, though the Wrangler does have electronic stability control to reduce the chance of rollover. For all that, though, I rather enjoyed my seat time in the Wrangler; the driving experience is unique and not entirely unpleasant.

In keeping with their off-road mission, all Wranglers have part-time four-wheel-drive (meaning that power goes the rear wheels until you shift to 4WD mode) and a low-range transfer case that provides extra power for low-speed off-roading, with an optional Rock-Trac system that has some extra tricks up its sleeve*. The Wrangler makes off-roading easy: Select 4WD Lo, take your foot off the brake and/or clutch, point the Wrangler at the rough stuff and let it do all the work. It will deftly crawl over tortuous terrain that would eviscerate an ordinary car. That said, if your biggest concern is getting through a bad snowstorm, the Wrangler is overkill.

* (The Rock-Trac system has lower low-range gearing, lockable front and center differentials, and an electronically disconnecting sway bar for better front-axle articulation. If that reads like gobbledygook, you probably don’t need it.)

Electronic wizardry is limited, but the Wrangler does offer an excellent navigation system that uses Garmin software, which is easy to program and use. The Bluetooth speakerphone works fairly well, although it’s nearly impossible to hear your calls when the top is down or the roof panels are removed.

Wranglers do not come cheap! The basic Wrangler Sport model, with a manual transmission and no air conditioning, costs $22,970 for the 2-door version and $26,470 for the 4-door. The 2-door Wrangler Rubicon model I tested, with the RockTrac 4WD system, hard top, and navigation, listed for $35,515. A 4-door Wrangler Unlimited with all the option boxes checked off can top $46,000. 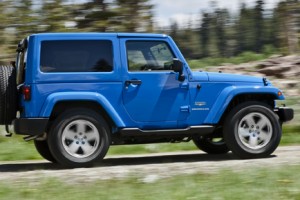 For all its foibles, I really enjoyed my week-long test of the Wrangler. It's exceptionally good at what it was designed to do -- but it's important to understand that the things we normally do with our cars, like driving to work, are secondary priorities for the Wrangler. Driving one on paved roads is a compromise, and if you have to swerve to avoid a crash -- or worse yet, if you get into a crash -- the Wrangler will not provide the same protection as a normal car or SUV. If you just want to feel the wind in your hair, a regular convertible like the Mazda Miata is a good choice. If you want a Jeep to do some occasional hard-core off-roading, the 2012 Toyota FJ Cruiser can go nearly as far off the beaten path, and it drives more like a conventional SUV, though it's roof is not removable. Nissan makes a convertible version of the Murano SUV, although it feels a bit bodged together. If you have your heart set on a Jeep Wrangler, well, I can't say I blame you -- there really is no other vehicle quite like it. Just remember to drive carefully!

Everything about it is unique

Great open-top experience once you wrestle the roof off