The staid, British four-door saloon is a tradition dating to the signing of the Magna Carta. The Jaguar XJL carries on the tradition, with five extra inches of legroom for the rear seats. The extra room is intended to benefit Asian executives who need a mobile office, but a lady would never use it for such a vulgar thing as business.

If your ladyship requires a town car on occasion, the Jaguar XJL is just as lovely to drive as it is to be driven in. It’s comfortable as the Queen Mary II and powerful as Winston Churchill. This is not the car for Top Gear watchers on BBC America; it is absolutely the car for carting a credenza to Antiques Roadshow, PBS edition.

Should you choose the Kate Middleton road of taking care of one’s own business and driving yourself, servants be damned, the driver’s seat of the XJL will not disappoint. The test car I drove was swathed in supple leather, including the heated steering wheel, in a tasty-sounding Truffle/Cashew combo with burled walnut veneers to equal any estate interior. (The exterior of this particular XJL was an equally delish Caviar.)

If you’d rather drink champers in the back seat with a gal pal a la Absolutely Fabulous, Jaguar provides burled walnut fold-down tray tables for the rear seats that surpass anything British Airways has ever offered. If you’re more the stiff-upper-lip sort, the rear seat climate controls will keep you as cool as your regal demeanor. There are privacy curtains in the rear seats as well, though sadly they are not available in chintz.

If your family is royal — or at least part of the peerage — the Jaguar XKL will serve you and your white-gloved children well. If your family is more, how shall we say, American, you’ll probably want to invest in a few extra-large beach towels to preserve the interior.

The Jaguar XJL is as safe as any other sedan on the road, with front, side, and side curtain airbags, tire pressure monitoring, and dynamic stability control. It also has a winter mode to help minimize sliding and maximize traction in slippery conditions so you can keep calm and carry on.

Jaguar’s central tech system is pretty intuitive. A big eight-inch touch screen in the center console controls just about everything in the car, from the seat heater settings (there are three levels) to the satellite radio and the navigation system.

The instrument cluster in the dashboard is a 12-inch TFT screen, which displays the same kind of virtual dials that you might find in an RAF fighter jet. There are of course readings for speed, RPM, and trip odometer, along with things you need to know in the moment, like the next turn you need to take, courtesy of the nav system, or the song that’s playing through the stereo.

Now that we’ve mentioned it, the Jaguar XJL has a lot of space to fill with sound. A 1200-watt Bowers & Wilkins sound system is available for $2300; that’s enough power to blast the Spanish Armada out of the water. And if you sneak in a little “Anarchy in the U.K.,” we won’t tell.

I had the 2011 Jaguar XJL to test drive during the most perfect week of weather an Anglophile could imagine: rainy and cool every day, with nary a sunbeam to shine through the panoramic glass roof.

I thought driving a car with an “L” in its name would be like trying to maneuver the QEII on city streets, but I was chuffed to learn I was mistaken. The car floated along the wet streets, accelerating smoothing when necessary and never losing traction. I even dared to parallel park, and I achieved the perfect position on the first try. Cheers!

The driving experience is so refined it falls into the background most of the time, leaving you to contemplate the wit and wisdom of P.G. Wodehouse. The car itself is like that author’s most famous creation, Jeeves, in that it only wants to take care of you, and it has clever ways to do so. A blind spot monitor warns you when another car is creeping up on your flank like one of Bertie Wooster’s insufferable relatives. No cause for alarm — just leave it to Jeeves.

There are also Supercharged and Supersport versions of the XJ and XJL, which have more power and far more power, respectively.

If you go all the way and get the longest car with the biggest engine, the 2011 Jaguar XJL Supersport, the price tag will start at $118,575. 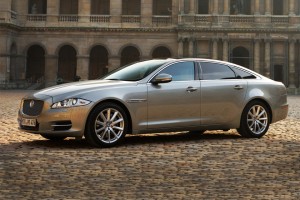 The 2012 Jaguar XJL delivers the best of Britain: luxury, class, and style.

The interior is top-notch British luxury for under six figures.

The exterior design is stylish enough to last longer than the Thatcher administration.

We are not amused by the in-town fuel economy -- 15 mpg. (Highway is a barely respectable 22 mpg.)