Infiniti is one of the more masculine luxury brands, but this time they’ve built one for the ladies with the new Infiniti JX35.

At the risk of sounding sexist, I’ve always thought of Infinitis as guy cars. Infinitis tend to be a bit over-the-top, like using half a bottle of lighter fluid to start the barbecue or stapling 500 feet of Christmas lights to the roof — you know, the sort of things men like to do while women watch, amused, and preferably from a safe distance.

In that sense, the 2013 Infiniti JX35 is not quite so manly. Infiniti found they were losing a steady stream of buyers because they don’t offer an SUV that fits between the five-seat FX and the gargantuan QX. So they designed the JX, a fairly conventional seven-seat crossover designed to deliver what women want, wrapped in an attractively-styled package that allows their men to maintain their masculinity.

Climbing in behind the wheel, I found the Infiniti JX35’s combination of rich materials and gently flowing shapes to be both upscale and relaxing, and the combination of a power driver’s seat and fully-adjustable steering column mean that nearly everyone from Calista Flockhart to Brigitte Nielson can find a comfortable driving position.

The stereo, air conditioner, and navigation system can be controlled with either buttons, a dial, or a touch-screen, so the driver can pick the input method that she prefers. Visibility is good and the JX’s boxy shape and big side mirrors make it easy to maneuver. My test car had the optional AroundView camera system, which supplements the usual rear-view camera with side-mounted cameras that make parallel-parking a breeze.

As seven-seaters go, the 2013 Infiniti JX35 comes up a bit short. The second row seats have plenty of head- and legroom, but they’re mounted too close to the floor. Your six-year-old daughter probably won’t complain, but your long-legged teenage son will. Access to the third row seat is excellent, but there’s little comfort to be had back there; in order for the third row occupants to have any knee-room, the folks in the second row have to slide their seats forward and give up most of theirs. The poor souls way in back do get their own A/C vents, though, along with a decent view through the optional rear-seat sunroof.

With all three rows of seats in place, the 2013 Infiniti JX offers 15.8 cubic feet of cargo space, barely enough for several bags of groceries. Fold the third row seat and you have 40 cubic feet, which is band-camp capacity. Nissan has thoughtfully fitted straps to pull the back seat back into place, but folding and unfolding the seats requires more muscle than most competitive SUVs.

The 2013 Infiniti JX35 offers the bare minimum of six airbags, with side curtain airbags that provide protection for all three rows. But it also offers a long list of options designed to help drivers avoid accidents in the first place.

My favorite of these is Distance Control Assist, which watches for cars ahead and eases off the throttle and applies the brakes if you are getting too close. On paper, this sounds really intrusive, but in the real world it works beautifully — it’s like having an invisible co-driver. In slow traffic, I actually let DCA do most of the braking for me. The Infiniti JX also offers a feature called Backup Collision Intervention, which “sees” objects behind the car and stops if you’re about to hit something.

Yet another option is the Active Lane Departure system, which senses when the Infiniti JX is drifting out of its lane, sounds an alarm, and even attempts to gently steer the car back into its lane. Unfortunately, this one didn’t work so well — the warnings came late and the corrective feature didn’t do much actual correcting.

The smaller Infiniti EX and Infiniti FX – both SUVs – drive more like sports cars than family trucksters, but not the Infiniti JX35. While most Infiniti vehicles are developed specifically for that brand, the JX shares its mechanical bits with the 2013 Nissan Pathfinder. (Infiniti is the luxury division of Nissan.) Under the hood is a 3.5 liter 265 horsepower V6, and while acceleration is strong by 7-seater standards, it’s not a muscle car like most Infinitis. But it also doesn’t swill gas like other Infinitis: EPA estimates are 18 MPG city and 23-24 MPG on the highway, and I was able to top 21 MPG in mixed driving.

Partial credit goes to the JX35’s continuously-variable automatic transmission (CVT), which varies the engine speed instead of shifting gears like a normal automatic. Some people dislike the slidy, motorboat-like sound of a CVT, but I love the smooth, shift-free driving experience. Front-wheel-drive comes standard (most Infinitis offer rear-wheel-drive, which gives them their sporty feel) and all-wheel-drive is optional. The ride is firmer and more car-like than most 7-seaters, but the 2013 Infiniti JX doesn’t fly through the curves the way Infiniti’s smaller SUVs do.

Along with all the active safety hardware, the 2013 Infiniti JX35 has options like a dual-screen DVD player and navigation system with real-time traffic and Zagat restaurant ratings. Infiniti offers two optional Bose stereos, a 13-speaker unit and a 15-speaker surround-sound setup, both of which are perfect for your post-day-care-drop-off rock-out.

New this year is the Internet-enabled Infinti Connection system, which works much like GM’s OnStar: If the car is involved in a collision, it uses a built-in cell phone and GPS sensor to call for help and pinpoint the car’s location.

It can also be used to track the vehicle if it is stolen, unlock the doors remotely, and alert you if the car is driven above a pre-set speed or outside of a pre-programmed boundary (useful for knowing if the valets have gone joyriding or your teenager “borrowed” the car). And you can use your favorite mapping site to send destinations directly to the JX35’s navigation system.

The 3013 Infiniti JX35 is offered in just one trim level, priced at $41,400 with front-wheel-drive and $42,500 with all-wheel-drive. That price includes leather upholstery, heated power-adjustable front seats, automatic headlights, and a sunroof. Options come grouped in packages, and an Infiniti JX with all the boxes checked tops out at $54,800, although Infiniti predicts that most consumers will spend around $48,000 on their JX35. 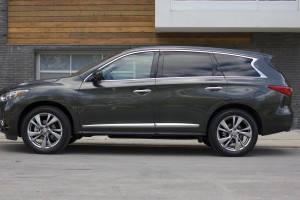 If you think Infiniti delivers on a sporty driving experience, the JX35 might leave you a bit cold. And if you regularly use the third-row seat in your SUV, keep in mind that while the JX35 does offer more space than its chief rivals, the Acura MDX and the Audi Q7, the GMC Acadia, Chevrolet Traverse and Ford Flex all offer even more room and convenience. Still, it's hard not to like the 2013 Infiniti JX35: It's handsome, plush, and it provides seats for seven with decent cargo room. If you (or your husband) insist on having an Infiniti in the driveway, I doubt you'll regret purchasing one.

Mediocre back-seat comfort, not as enjoyable to drive as most Infinitis