The 2012 Infiniti G37 convertible was as full of surprises as a box of Cracker Jacks, most of which were as pleasant as extra prizes spilling into your hand along with caramel-covered popcorn. But some of the surprises were more like those little black bits that you hope are just burnt peanuts.

Infiniti isn’t a luxury brand on most people’s radar, so merely seeing one in the driveway is a bit of a surprise. So is the fact that the Infiniti G37 test car delivered to my house was a convertible — the hard top fits seamlessly to the body, so when it’s up, it looks exactly like the coupe Infiniti G. If finding out it’s a convertible is like getting a temporary tattoo in your Cracker Jacks, the 3.7-liter V6 engine tucked under the hood is like getting the ring.

The red “S” badge next to the G37 on the Lapis Blue trunk did not stand for “surprise;” rather, it stood for “Sport.” This version was souped-up with a short-throw 6-speed shifter, which means I could change gears faster than you can lick your way to the center of a Tootsie Pop.

The interior of the Infiniti G37 was swathed in creamy off-white leather like scoops of vanilla ice cream. As with so many two-door convertibles, the rear seats were pretty cramped, but the driver and passenger got the full luxury treatment, with power-heated seats and plenty of room. The roof is pretty low, though, so frothy hairdos and perky topknots will graze the headliner if the seat isn’t leaned back a bit. Anyone who dared squeeze into the back would have to hunch forward to keep from knocking his or her noggin on the steeply curved rear roof.

I was amazed at how clear the sound from the stereo was, even with the roof down. This is an achievement even the big boys like Aston Martin haven’t quite gotten down yet. The reason for such great sound in the Infiniti is color-matched speakers on either side of the headrest. Why doesn’t everybody do that?

There were four seats, but with the top up, it would be nearly impossible to get to the back seats without buttering the kids up and slipping them back there. Older kids with actual legs and kneecaps would be miserable for any trip longer than the corner ice cream shop. Not to mention what Cracker-Jack-coated fingers would do to those leather seats. (Do kids even eat Cracker Jack anymore? Probably not.)

The Infiniti G37 convertible has all the most up-to-date safety equipment, from the seatbelts with pre-tensioners to the advanced traction control and dynamic control systems that keep the tires stuck to the road like saltwater taffy on a hot day. Because this is a convertible, it has roll bars in case of an accident. Because this is a stylish and expensive convertible, those roll bars stay tucked out of sight until they’re needed, and then they pop into place behind the seats.

The 7-inch touch screen display in the center console was one of the best control centers I’ve seen in a car in a while. It was intuitive and easy to enter destinations into the nav system or find XM satellite stations — both functions that can be more like cavities than candy in some cars. And if the touch screen isn’t your thing, the directional buttons under the screen are simple to use and easy to reach.

The roof control is incredibly simple — one rocker switch between the seats with two words: Open and Close. Push the button and hold it while the 3-piece roof breaks into sections like a chocolate shell on an ice cream cone and folds itself away in the trunk. Burnt peanut number one: There’s a weird little piece of the floor of the trunk that has to be manually folded up and into position before the roof will go down. Burnt peanut number two: It takes a full 30 seconds for the roof to go up or down, more than twice as long as the roof on the latest Mazda Miata.

I had no idea what to expect from the Infiniti G37. Would it be a proper luxury car? Would the engine whine and the cockpit howl with wind noise? Would it be worth its $50k price tag?

Let’s start with the prizes in the Cracker Jack box. The engine does not whine — it winds like a top when you pull the string and let ‘er rip. If you like a stick shift, this stick shift likes you, and you can run the RPMs up pretty high before choosing the next gear. When the top is down, there is wind noise, but no more than you’d expect, and those personal speakers in the headrests help you hear the sound from the stereo.

But there are more burnt peanuts in the box. Sometimes, when you want to open or close the roof and push the rocker switch to do so, the readout in the dashboard just informs you that the roof is open or closed. No movement occurs. I usually took the car out of gear and tried again, and it would work, so I don’t know if that was a cure or a superstition. On folding the roof away, the trunk would do a most ungraceful CLUNK as it finished.

Speaking of the trunk, it is quite helpful in closing itself — too helpful. I realized after letting the trunk lid drop that I’d forgotten my water bottle inside, so I snuck my fingers under the as-yet-unlatched trunk to reopen it. Mistake. The trunk elves were already latching it electronically, and I nearly had my fingers squished like so many sad, pink Peeps.

The Infiniti G series is the creamy center of the make’s lineup, and there are several variations on its theme, from sedan to coupe to convertible. The G37 convertible starts at $47,495 with a long list of standard equipment. The G37 S that I tested was $54,950 including destination charge and optional R-Spec high-friction brake pads from Nissan’s racing division. It also came with standard upgrades like a bigger hard drive for music, a 6-speed manual transmission, bigger wheels, and a rearview camera. 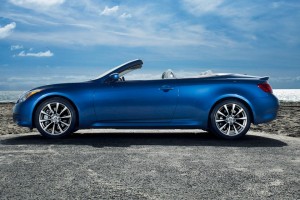 The 2012 Infiniti G37 S has lots of pleasant surprises, from the quality of the interior to the sportiness of the engine and transmission. But for the price, there are a few too many burnt peanuts for my taste.

The sound of the V6 engine is surprisingly satisfying — and so is its speed.

The Infiniti G37 has one of the easiest-to-navigate navigation systems I’ve used.

The roof operation is a bit slow and clunky.