Hyundai takes what’s best of its competitors’ luxe details, jams them all into the Hyundai Genesis 3.8, and does so for quite a bit less money.

You know how some couples have free passes just in case Ryan Reynolds or Jessica Alba get lobotomies and decide to run off with a paunchy 46 year-old forensic accountant? My husband doesn’t know it yet but the only man I’d ever leave him for is the Hyundai Genesis 3.8 Sedan.

You have to believe me: I am not on Hyundai’s payroll. I don’t even particularly like Korean food (stinky burps). But boy oh boy oh boy do the fine folks at Hyundai know how to design and manufacture some spectacular cars.

The Hyundai Genesis 3.8 Sedan is, inside and out, about as pretty a four-door as you’re ever going to see. And with a starting sticker of $35,075 it’s more than $10,000 – take a second to count those zeros – less than the starting price of the Infiniti M and the BMW 528i. But no one would ever suspect you were saving money on this honey of a ride. Unless you have something against luxury, comfort, power and performance, there’s no reason to look any further than the Hyundai Genesis.

I test-drove a black (okay, Black Noir Pearl – and I thought lipstick color names were weird) Hyundai Genesis with a Saddle interior that was as rich as a chocolate soufflé. And this leather is everywhere you want it to be; in addition to being stitched into incredibly pampering seats, it’s on the dash, console, doors and just about anywhere else you look. This wall to wall luxury (and genius engineering) provides you with about as quiet a cabin as you’ll find this side of a Bentley dealership. I think. Actually, I’ve never been to a Bentley dealership but they just look quiet, don’t they?

But if you’re the kind of Vroomgirl who likes her music, Hyundai makes two Lexicon audio systems available and they are a wonder to behold. indication began in July, so I cranked up the Phil Spector “Wall of Sound” to 11 and it was ridiculously great. Hyundai Genesis’ 17-speaker system (available in the Technology Package) is one of the best sound systems I’ve ever heard in a car.

As for the climate, seats have both a heating and cooling capabilities, front and back, which work fast and efficiently. I don’t have one piece of furniture in my home anywhere near as nice as Hyundai Genesis seats, and with separate climate controls for driver and passenger there were no fights over the thermostat. Yes, sadly, living in my car would be a step up. The only interior downside is, well, that there is no down side in the back; I’ve come to rely on backseats that fold flat and that doesn’t happen here.

At first I was intimidated by the sleek silver control knob, a/k/a the Multimedia Controller and Driver Information System (DIS) but, because I don’t have male anatomy and all that entails about asking for directions, etc., I had no problem opening the Operating Manual and figuring everything out in under a minute. You can also opt for the nav system that sports an 8” touchscreen but both provide you with a text-to-speech feature, Sirius XM Satellite Radio with real-time NavTraffic and a great back up camera with lots of helpful lines and beeps for those of us who are parallel-parking-impaired.

Bluetooth, Smart Cruise Control (which automatically speeds up and slows down when the Genesis gets too close to or lags too far behind the vehicle in front, to reach the driver’s set speed), iPod cables – they’re all present, accounted for and in easy reach.

The Hyundai Genesis 3.8 is one of those cars that’s a blast to drive. Freeways? Let ‘er rip. Windy roads? Easy-peasy. Stop and go traffic? It never breaks a sweat, unlike me but that’s why I really liked the seat-cooling option.

I bought a dozen eggs during a test drive and left them on the back seat. Usually, I wrapped a sweatshirt around the egg carton, strap them into the passenger seat AND use my Mom Gorilla Arm every time I come to a stop. In the Genesis, they sat in the back and never budged. Here’s why: The Genesis comes with Electronic Stability Control with Traction Control, ABS with Electronic Brake Force Distribution and Brake Assist, 4-Wheel Disc Brakes, Dual Front and Read Side-Impact and Side Curtain Airbags and Electronic Active Front Head Rests. All this is to say that there’s very little body lean in the Genesis when going around corners. And that there are loads of safety features that will get you out of a jam, should you need to stop suddenly.

I’m guessing the Insurance Institute for Highway Safety was thinking more about humans than things that fall out of a chicken when they awarded the Hyundai Genesis 3.8 their best possible score in its frontal offset, side and roof strength tests. 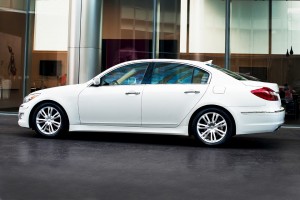 I love the Hyundai Genesis' looks and style. But even more impressive is the interior's spa-worthy comfort.

This is weird but the side mirrors seemed disproportionally big for a car this sleek.