With prices starting just below $19,000, the 2013 Honda Insight is the least-expensive hybrid car sold in America.

As VroomGirls.com’s resident cheap-car expert — a title I bestowed upon myself — it fell to me to review the Honda Insight. Prices start at $19,290, about $500 less than Toyota’s new entry-level Prius C. An Insight EX with all the trimmings (and granted, there aren’t many trimmings) will run you $24,480, which is still less than a regular Prius.

Before I get on with the review, let’s talk for a minute about hybrid economics. My wife and I drove a Honda Insight for a year and 30,000 miles and averaged just over 43 MPG. That’s pretty good, but if you compare the fuel savings to the cost premium over a good small car like the Ford Fiesta or the Honda Fit, it’ll take you at least 100,000 miles to make up the cost difference. This is true for most hybrids; unless you’re a serious road warrior, you won’t save much money, although you will be better insulated against spikes in fuel prices. But if you want a hybrid in order to reduce your own personal impact on the environment and our ever-dwindling fuel supplies, then a) you go, girl! and b) you’re on the right track.

The 2013 Honda Insight uses a split-level dash, similar to the one in the Honda Civic, with a small digital speedometer above the steering wheel rim and lesser gauges below it. I like this layout, but my wife doesn’t; she had to adjust the steering column to a less-comfortable position in order to see the speedometer. Behind the speedometer is a ribbon of light that glows green when you’re getting good gas mileage and angry blue when you’re being Loretta Leadfoot.

The Insight’s interior echoes its low price. Though the aesthetics are nice enough, the materials aren’t the nicest in Honda’s warehouse, and my wife and I were dismayed by how quickly the fabric on the armrests wore down.

Small as it is, the Honda Insight makes a decent family car. The back seat has plenty of room for kids in car seats, although if you’re raising a six-footer — as I am — that swoopy aerodynamic roofline reduces rear-seat headroom. The Insight’s hybrid battery pack is tucked way down near the rear axle, so the Insight’s trunk is big and boxy, with a huge hatchback lid that makes it easy to load and durable carpeting that resists scuffs and scars.

The Insight comes with six airbags, antilock brakes and electronic stability control – all standard. In the Insurance Institute for Highway Safety crash tests, the Insight scored best-possible marks for front, side and rear impacts, but only second-best in the roof-crush test, which kept it from getting a Best Safety Pick award.

The Insight has a bunch of gadgets designed to help get better fuel economy, from the aforementioned colored speedometer to an “Eco score” that pops up when you shut off the car. I liked the driver’s aids, but a Prius-owning friend objected: “If you get bad gas mileage, the car makes it seem like it’s all your fault.”

Among the Insight’s few options are a Bluetooth speakerphone with limited compatibility and an overpriced ($1,725) navigation system which is woefully behind the times and expensive to update. I’d skip them both in favor of a low-priced TomTom or Garmin.

The Insight uses a 1.3 liter engine with Honda’s Integrated Motor Asisst (IMA) system, which employs an electric motor on the engine’s crankshaft to provide a boost during acceleration. With a combined output of just 98 horsepower, the Insight is not a car for people in a hurry.

IMA is not the most effective hybrid system, as the engine always has to be turning for the car to move. (The Insight can run on battery power alone, but it still has to spin the engine, which wastes power. In practice, it rarely does this.) The engine does shut down at stoplights, but it takes the air conditioner down with it, so you your choice is to either waste our natural resources or sit there and sweat.

All this translates to leisurely acceleration and so-so fuel economy by hybrid standards — 40 MPG city and 43 MPG highway according to the EPA, and around 41-43 MPG in mixed driving according to my experience. While significantly better than most small cars, it’s still way behind Toyota’s competing Prius C, which easily tops 50 MPG in city driving. The Insight even trails the full-size Prius, which is bigger and heavier but gets around 48 MPG in real-world driving. The Insight’s saving grace is that it drives like a Honda — it feels responsive and light on its feet compared to Toyota’s hybrids.


If you can ignore the second-class interior trimmings, the $19,290 base-model Insight is actually pretty nicely equipped: Air conditioning, automatic transmission, power windows and locks, and a two-speaker CD player with an auxiliary input jack. The $21,065 LX model adds cruise control, a center armrest, floor mats, and a 4-speaker stereo with a USB jack, while the top-of-the-line $22,755 Insight EX gets alloy wheels, paddle shifters, heated side mirrors, a nicer 6-speaker stereo, and visor mirrors. Though once a bargain compared to other hybrids, the Insight is only a few hundred bucks less than Toyota's new Prius C, and it's more expensive than conventionally-powered subcompact cars. 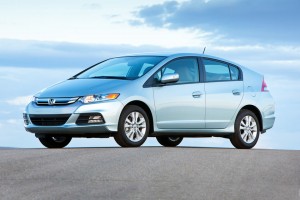 For all its shortcomings, I really do like the Insight (although I'm one of the few journalists who does). While it may not be the most fuel-efficient hybrid, it does use less fuel than most cars and it does offer a lot of interior space for its small size. My family used the Insight as a replacement for our hard-working Honda Accord wagon; the Insight hauled nearly everything the wagon could (albeit with not much room to spare) and saved us a big chunk of money in fuel costs. The Toyota Prius is a better hybrid in every way, but it costs more money. If you're looking to help the environment on a skinny budget, than the Insight is a good choice. And good for you!

Low price, lots of storage space for its small size