Honda must be doing something right with its CR-V — it’s been a top seller in the crossover segment since it was released in the USA in 1997. The CR-V was just redesigned in 2012, so in terms of design, space and technology, it’s still among the latest and greatest.

My only quibble with this awesome vehicle is that the Honda CR-V is still only available with a four-cylinder engine. Acceleration is adequate, but drivers who carry heavy cargo or prefer more power will no doubt want to take a look at the Toyota Rav 4, Kia Sorrento, Chevy Equinox or Subaru Forrester – all of which can be upgraded to a beefier six-cylinder engine.

Still, if past sales performance of the Honda CR-V is any indication, Honda will have no trouble finding buyers. With its functional styling and ease-of-driving attributes the CR-V has lots of appeal for smaller families and about-town shoppers.

While CR-Vs of the past were functional and utilitarian, the new one has a fluid, almost organic appearance that features sweeping lines across the dash. Enhanced user facilities include a storage compartment between the front seats that is big enough to easily fit a standard sized handbag. Perhaps the designers at Honda are finally listening to their female customers.

Seats are comfortable, if not particularly generous in width. Leg room is adequate both up front and in the back, allowing four regular sized adults to fit nicely while tooling around town and on longer road trips.

The dashboard controls are logically laid out, and overall the cabin is very easy on the eye. In fact, if it weren’t for the higher ride and driver visibility angle of this CUV, you’d swear you were in a traditional passenger car.

Another great standard feature is the addition of a rear view camera on all models, something that is usually an added cost on competitors’ vehicles.

The 2013 Honda CR-V is expected to receive a 5 star safety rating from the NHTSA and be Insurance Institute for Highway Safety “Top Safety Pick.”

For a standard two-adult two-child family in search of an ideal family vehicle, the CR-V is hard to beat. It offers a level of comfort and spaciousness not found in many of its competitors.

The 2013 Honda CR-V’s greatest feature may be the fold down rear seating arrangement. Spring-loaded with a 60/40 split, a simple lever tug folds the rear seats flat and collapses the head rests granting 37.2 cubic feet of cargo space. That’s a big enough space to fit two mountain bikes! Even with the rear seats upright I managed to get a four-piece luggage set and a stroller in the back with ease. It also boasts the lowest cargo floor in its class for easy loading and unloading. Even with all the new moving parts, rear legroom remains the same as the previous generation model.

The CR-V wants you to drive smarter. In fact, it will coach you through the use of ambient light on the dashboard. Two strips of light flank the speedometer and glow either green – meaning you are driving in a fuel-efficient manner- or white – your use of acceleration and braking is not optimal.

My first thought was “No way do I need a car to teach me how to drive!” But after cruising around in the CR-V for an hour or so, the glowing light is less intrusive than I imagined, and almost comforting when I noticed I was driving in the “green zone” without being aware of it.

There’s also a wealth of tech features. All models come equipped with Bluetooth phone and streaming audio as well as a Pandora interface. And for those who can’t wait to find out what that latest text from your BFF was, there’s also an SMS text messaging function that allows you to listen to your incoming texts via the audio system and reply via one of six preset responses.

For the kids (both actual and grown!) in the back who are just too bored to even look out the window at the passing scenery, Honda offers an optional rear-seat DVD entertainment system that was unavailable on all previous CR-V models.

The tech-heads at Honda have reduced cabin noise in the 2013 CR-V, which is a bonus when you plant your foot on the accelerator. Lower the windows and you can hear that 2.4 liter 4-cylinder engine revving to get traction on hills or when transporting a heavy load. Power in the lower gears of the five speed automatic transmission left me wanting – especially when the “Econ” mode is engaged, which dulls the acceleration – and I couldn’t help but wish for those extra two cylinders worth of oomph available in its competitors.

The steering and handling are sharp, and the ride is incredibly smooth – again the feeling of being in a passenger sedan rather than a CUV (Crossover Utility Vehicle.) That smoothness is due in part to an increased damper ratio in the rear suspension – think of it as extra padding in the rear wheels – that softens the overall ride quality but does increase body roll and lean slightly when going through corners. It’s a minor annoyance and only drivers who are upgrading from older CR-Vs are likely to notice.

Every 2013 Honda CR-V comes with a 2.4-liter four-cylinder engine that produces 185 horsepower and 163 pound-feet of torque. A five-speed automatic transmission and front-wheel drive are standard, while all-wheel drive is optional. The latter sends power to the front wheels exclusively until slippage is detected, at which point power is sent to the wheels with the most traction. 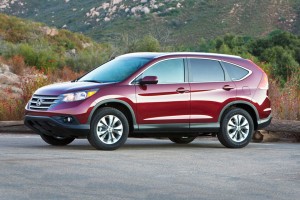 The 2013 Honda CR-V has a winning combination of size, cost, and driving ease.