The ubiquitous Honda Civic now has a nicer interior, more standard equipment, and delivers better value-for-money — and that makes us suspicious.

Let’s say you get home to find your sweetie waiting with a giant bouquet of flowers. It’s not your birthday, anniversary, or Valentine’s Day. How do you react?

If your response is “Honey, that’s so sweet!” then you should skip right down to the next section.

If your response is “Okay, what did you do wrong?” then a little more explanation is in order.

The 2013 Honda Civic is an unusually nice car — nice enough to engender suspicion, and rightly so. Honda introduced an all-new Civic in 2012, and it was panned by critics (including Consumer Reports) for extreme cost-cutting. The buying public didn’t seem to care — they bought more Civics than they had in years — but Honda felt a do-over was in order, so they spent a not-insubstantial sum to spruce up the 2013 model. We at VroomGirls thought the 2012 Civic was just fine; a little cheap-feeling, perhaps, but it was also roomy, reliable, and economical, which is exactly what we expect from the Civic. That said, if Honda wants to surprise us with a bouquet of flowers, who are we to complain?

The centerpiece of the 2013 Honda Civic is its split-level dash, which has the important stuff (digital speedometer, fuel gauge) up top and secondary info (tachometer, warning lights) down below. Though the setup takes some getting used to, I rather like it, since it helps the driver keep her eyes on the road. My wife disagrees — when she adjusted the seat and steering wheel to the most comfortable position, the rim of the wheel blocked the speedometer. Your own experience will vary, most likely with the length of your torso.

As part of Honda’s mea culpa, the new Civic interior has been given a first-class upgrade, with soft-touch materials on the dashboard, armrest and door panels — a nice change from Civics of the past few years, which wore less touchable materials. This is also the first time in a long time that you can get any model of Civic with an all-black interior; previously this was reserved for the sportier models. I found the solid black interior a bit depressing; I prefer gray or tan.

This has always been the Civic’s ace in the hole — it’s very roomy for a compact sedan, thanks largely to a back seat that offers a flat floor (nobody gets stuck with the “hump” in the middle) and nearly as much legroom as some mid-size cars. But the 2013 Honda Civic cheats its owners on trunk space; at 12.5 cubic feet, it’s smaller than most of its competitors. The Civic’s rear seat can be folded down to increase trunk space, but LX and HF models get a one-piece seatback; only the EX model gets a more useful 60/40 split-fold setup. The 2013 Honda Civic also is offered as a slick-looking two-door coupe, and while the back seat is significantly tighter than the sedan’s, it’s still habitable for adults.

The 2013 Honda Civic isn’t exactly a hot-bed of safety technology; it has the standard six airbags (two in front, two in the front seats, and two side curtain airbags that cover the side windows), along with government-mandated safety equipment like antilock brakes and electronic stability control. As part of the 2013 makeover, Honda beefed up the Civic’s structure to provide better protection in the Insurance Institute for Highway Safety’s new “small overlap” test. It worked — the Civic is the first compact car to earn IIHS’ Top Safety Pick Plus award. The Federal Government had not crash-tested the new Civic at the time of writing, but the 2012 model had a perfect five-star rating for the sedan and four out of five stars for the coupe.

Each model in the 2013 Honda Civic lineup has Bluetooth phone connectivity, and includes the rather handy ability to read out text messages. Also new for 2013 is a backup camera, standard in all Civics. One of the coolest gadgets is the display screen on the dash, located just to the right of the speedometer. Along with display screens for the trip computer (long-term fuel economy, distance to empty) and stereo, you can upload and display photos, the modern-day answer to taping a picture of your kids to the dashboard.

But the Civic’s optional touch-screen navigation system is a real disappointment — the graphics look outdated and the voice-recognition system (which supposedly lets you program a destination by spelling it out) is nearly useless. The one advantage to the navigation system is that it comes with a wide-angle view for the backup camera; if you’re backing out of a parking stall, it shows you cars coming down the aisle. It’s very handy, but it still doesn’t make the navigation system worth the $1,500 Honda is charging — not when you can get a superior Garmin or TomTom for less than $200.

Each 2013 Honda Civic (except the Hybrid and hot-rod Si model) gets a 1.8 liter 140 horsepower engine, which provides decent merging and passing power with good fuel economy. EPA ratings are 28 MPG city and 39 MPG highway for automatic Civics (41 MPG for the HF model), while the manual transmission, available only in the entry-level LX model, scores 28/36. Colored strips flanking the speedometer serve as an efficiency coach; they glow green when you’re driving economically and angry blue when you’re not. All Civics have an “ECON” button which changes the way the transmission shifts and the engine responds to the accelerator pedal, but even with ECON engaged most of the time, I averaged 28.8 MPG — a bit lower than I was expecting based on Civics I’ve reviewed in the past.

Critics complained that the 2012 Civic wasn’t as enjoyable to drive as earlier versions, so the 2013 Civic features a re-tuned suspension designed to recapture the Civic’s youth. It works: The Civic feels agile and light on its feet, with low-effort steering that makes city driving easy. Out on the open road it’s as stable as a Clydesdale, and improved sound insulation means that the 2013 Honda Civic is finally as quiet as competing cars.

For 2013, Honda has eliminated the stripped-down DX model (which lacked air conditioning and a stereo) and more standard equipment, making it an excellent buy. 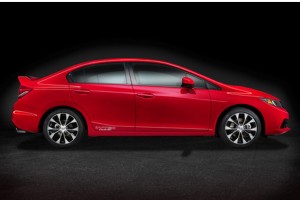 Even if Honda hadn't enhanced the Civic for 2013, I'd still recommend it; the Civic is roomy, fuel efficient, easy to drive, and as reliable as death and taxes. Aside from the dreadful navigation system and small-ish trunk, it's pretty much the ideal compact car. And what of the 2013 enhancements? I'd complain if Honda had jacked up the prices, but they haven't -- in fact, the 2013 Civic is only a couple hundred bucks more than a comparably-equipped Hyundai Elantra. It's a fantastic car -- flowers and all.

One Response to “Honda Civic”