The 2014 Honda Accord is a return to the company’s roots: This car is easy to live with, is nice and roomy, and will last forever.

10 Things To Know About This Car

Do you consider frugality amongst the best of your qualities? You can’t go wrong with a 2014 Honda Accord. Their claim to fame is their dependability. Buying a new car or fixing an old one costs money, and when one owns an Accord, one rarely has to do either.

Honda lovers from way back will appreciate the design of the 2014 Honda Accord dashboard. Pre-2008 Accords were known for their simple, straightforward design. They were redesigned for 2008-2012, and that version was more like a land yacht with a dashboard that looks like it belongs on the Space Shuttle. The 2014 design is a nod to the Hondas of yore.

There are three versions of the 2014 Honda Accord available: the “regular” one (which is the one we drove for this review) It is also available in a hybrid engine, which uses both gas and electricity, reducing gas consumption. And, there is 3rd plug-in hybrid version available in selected areas, which is kind of a…well, a hybrid of the hybrid. It can go 13 miles on electricity alone, and does need to be plugged in, but uses some gas as well. So, you have the Accord, the Accord Hybrid, and the Accord Plug-In Hybrid. If you want to see what driving these different electric/fuel options feels like, this might be the car to try your test drives on.

Interiors have never been the Honda Accord’s forté. Old ones were made out of cheap plastic, and the newer ones had more buttons than there are children in New Zealand. With the 2014 Honda Accord, we have finally reached a fair compromise: While Honda still prefers buttons over dials, the stereo and air conditioning controls are simple to use, and the materials and trim are of a much higher grade. Accords with light-colored interiors get a black dashboard top, which reduces glare in the windshield — a nice touch. An upgrade from the 2013 model, the LX sports a nicer seat fabric than before.

To display all the techy stuff, the 2014 Honda Accord features a big, bright 8″ color screen. This serves as the display for the stereo, backup and blind-spot cameras, and the optional navigation system–and will also display photos from a USB drive. Pricer Accords get a touch-screen stereo, and while having two touch screens on one dashboard looks a bit silly, the nod towards simplicity is appreciated. The top-of-the-line display stereo with HondaLink (found on EX-L and Touring trims) features Internet-enabled apps that can be accessed via your smart phone, including Aha Radio, which allows you to listen to music, podcasts, and even audio versions of your Facebook and Twitter feeds. Honda has upgraded its optional navigation system; previously, it was one of the worst in the biz. It’s still not the easiest to use, but it’s a definite improvement. Unfortunately, it’s only available on top-of-the-line models and it’s overpriced at $2,000 — about fifteen times what you’d pay for a portable unit that does the job better.

Honda’s gizmos tend to be sensible rather than showy, and the 2014 Honda Accord sports one of their best: A blind-spot monitor. Several cars have systems that will warn you when there’s a car in your blind spot, but the 2014 Honda Accord actually has a little camera mounted on the right-side mirror. When you put on your right turn signal, the dashboard monitor displays a wide-angle view of the road next to the car — good enough that you can use it instead of your mirror. Cool stuff! The blind-spot monitor is standard on EX, EX-L and Touring models.

The 2014 Honda Accord has six airbags (two in front, two in the front seats, and two side curtain airbags that cover the side windows), a low number at a time when many of its competitors are adding knee airbags and rear-seat side airbags. But the framework of the Accord’s body is specifically designed to survive crashes with larger vehicles, which provides additional protection. The Accord also comes with a standard rear-view camera, an important safety features for families with small children (and a big help when parallel parking).

Under the 2014 Honda Accord hood is a new 2.4 liter, 4-cylinder engine. With 185 horsepower — more than V6 engines from a few years ago — it produces plenty of power for passing and merging onto the freeway. Accord buyers can choose from an outstandingly good six-speed manual stick-shift or a continuously-variable automatic transmission (CVT). Instead of using five or six fixed gear ratios like a traditional automatic, the CVT allows the engine speed to rise and fall as needed. The result is smooth acceleration (there are no actual gear shifts) and excellent fuel economy estimates: 26 MPG city and 35 MPG highway, short of the Nissan Altima (27/38) but still one of the best on the market. (Manual-transmission Accords are rated at 24/34.) Honda also offers a V6 engine in the upper trim levels; it’s smooth and powerful, but less fuel-efficient.

Honda has done a lot of work to the suspension, transforming the 2014 Honda Accord into one of the best handling mid-size cars you can buy. It offers good fun for whipping through your favorite curvy road, but there’s a trade-off: The ride quality is nowhere near as good as its competitors. The stiffer suspension that enables such good handling also transmits a lot of movement to the cabin, making smooth roads feel bumpy and bumpy roads feel like cobblestones. Ironically, the “Sport” model — which is tuned for even sharper handling — has a slightly more comfortable ride.

The Honda Accord has shrunk since 2012. The sedan is 3 inches shorter, which you’ll appreciate when you have to park it — but the back seat and trunk have gotten more spacious. For families, that means plenty of room for kids from cradle to college, with a trunk that will easily handle big strollers, big suitcases, and big science projects. You can also buy the Honda Accord as a two-door coupe; with a smaller trunk and trickier back seat access, it’s not the best choice for families with kids. Still, as long as your friends are thin enough to squeeze in behind the front seats, they probably won’t complain too much when you’re the designated driver. 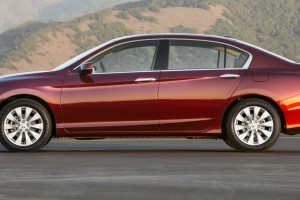 The ride quality may be a deal-breaker. You might like a car that rocks your world, but the Accord might be taking things a bit too far. If you are thinking about buying an Accord, it's important that you test drive it on the roads you drive every day, just to make sure the hard ride won't be a surprise. Having said that, I'm mostly impressed by the 2014 Honda Accord. I like its simple controls, its well-finished interior, the big back seat, and its sharp handling. And as solid as the new Accord feels, I have no doubt it will uphold Honda's reputation for faultless build quality and reliability.