The full-size Ford Taurus is a big car with a big options list and big appeal — too bad it’s a bit small on space.

I’m a big advocate of small cars, but I’m also a big hypocrite. Because despite urging my readers to go small — small cars are cheaper to buy, cheaper to run, and have way more interior space than most people realize — I really do love big cars. I like to think it’s because big cars are so uniquely American, but it might just be that I’m a 5’6″ tall man with a Napoleonic complex.

Ford’s Taurus has been around long enough to qualify as an institution, with the current version just introduced in 2010. From the outside, the Taurus is handsome and imposing, even a bit brutish in a don’t-worry-the-bouncer-is-a-friend-of-mine kind of way. It’s also good to drive and brimming with driver-friendly technology. But somewhere on the way to modernization, the Ford Taurus lost sight of its big-car ideals, which you’ll see as soon as you sit inside.

For a car that’s so big, the Ford Taurus is surprisingly stingy on interior space. The front seats have a small bottom cushion that provides little thigh support, although the optional massaging feature is wonderful. Even so, both front seats are squeezed by a center console wide enough to land an airliner. The old Ford Taurus was a great car for the diet-averse, but those who worship at the church of the cheeseburger might find the new Taurus a bit of a squeeze. And the short windows don’t help much; they give the driver a pillbox gunner’s view of the world.

That said, the cabin is finished in high-quality materials, and the control layout is straightforward and easy to learn. The cool-looking T-handle shifter is borrowed from the Mustang, while secondary functions (stereo, air conditioning, navigation) can be controlled by voice with the optional SYNC system, which will get raved about in the Gizmos and Tech section below.

Like the front seats, the back seat is tight for such a big car. Headroom is limited, which makes it difficult to get babies in and out of their car seats, not to mention the litany of complaints from tall teen-agers. And the short, high-mounted windows mean that small kids can’t see out.

On the plus side, the Ford Taurus has a trunk as big as a swimming pool. Load it up with mega-sized suitcases, buy the biggest stroller known to womankind, and there will still be plenty of space left over for your kids. Err, I mean, your kids’ stuff.

The Ford Taurus features six airbags (two in front, side airbags for the front seats, and two-row side curtain airbags that cover the windows). And it aced the Insurance Institute for Highway Safety’s front, side, rear, and roof-crush tests, earning a Best Safety Pick award.

But beyond crash protection, the Ford Taurus excels at crash avoidance, with options such as a front-end collision warning system, which warns you of dangers ahead you might not see. (This feature saved me from rear-ending a big Dodge van in traffic. Thanks, Ford!) The Taurus also comes with the MyKey system, essentially a set of parental controls that allows you to limit the Taurus’ top speed, stereo volume, and other parameters when your kids are driving.

The Ford Taurus has a long list of useful options like wipers that automatically turn on when it rains, high beams that turn themselves on and off, and a navigation system with real-time traffic. But my favorite is the Microsoft SYNC system, which allows voice control of the stereo, climate control, Bluetooth phone, navigation, and even your iPod — you can say things like “Play artist Ani DiFranco” or “Play playlist ‘driving music'” and SYNC will make your wish its command. Several cars offer voice-recognition systems, but SYNC works better than any I’ve experienced. It will even read text messages out loud, and allow you to send pre-written replies such as “Yes,” “No,” “Stuck in traffic,” and “I’m running a few minutes late.”

Taurus SE, SEL and Limited models are powered by a 263 hp 3.5 liter V6. With two tons of vehicle to haul around, the engine has its work cut out, especially when the Taurus is equipped with all-wheel-drive. AWD makes for great all-weather grip but adds another 200 lbs, which is like taking an NFL linebacker everywhere you go. EPA fuel economy ratings are 18 MPG city/28 MPG highway with front-wheel-drive and 17/26 with all-wheel-drive, which is similar to other full-size sedans. And the handling is quite good — the steering has a nice feel to it and the Ford Taurus is very agile for such a big car.

The Ford Taurus SHO gets a 3.5 liter EcoBoost engine and standard all-wheel-drive. Ford says the EcoBoost delivers the power of a V8 with the fuel economy of a V6, and they aren’t exaggerating — the EcoBoost produces a stonking 365 hp with EPA estimates of 17 MPG city/25 MPG highway. The SHO is significantly quicker than the base car, and it handles better, too, but it’s a bit lacking in the thrill department — it feels more like a nice, fast Taurus than a true sport sedan.

Pricing starts at $26,350 for the SE model, which features cloth seats with driver's power adjustment and a single-CD stereo. This is the version car-rental agencies will buy; Ford expects retail buyers like you and me to take the $28,550 SEL, which adds dual-zone climate control and upgraded interior trim, or the $32,950 Limited, which gets leather seats and a premium stereo. The hot-rod SHO starts at $38,950.

The Taurus' options list is long and luxurious, with goodies like heated and cooled seats, adjustable pedals, dynamic cruise control, and those massaging cushions I mentioned earlier. (Mmm, massage.) With all the gadgets, the Taurus Limited tops out at $43,485, while the SHO rises to $46,190. 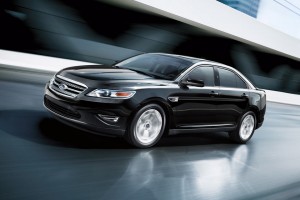 In many ways, the Taurus is a wonderful car. It's good looking, decent to drive, offers road-hugging all-wheel-drive, and it is available with the sort of options you'd expect to find on a BMW or a Mercedes. And the prices are reasonable for what you get. But somewhere along the line, Ford seems to have forgotten that this is a full-size sedan — aside from the trunk, it just doesn't have the sort of interior space I expect from a big car. If you're buying a larger car for the room, the Chrysler 300 and Toyota Avalon are better choices.

Long options list, trunk is big enough to have its own zip code.

Not enough interior space for such a big car.