Ford’s full-sized sedan has been to the spa for a serious makeover. The result is a more attractive, more luxurious, higher tech, better equipped, and better performing car.

You may not believe it or remember, but for a time, the Ford Taurus was the bestselling car in America – better than all those Camrys, crossovers and hybrids too. Then Ford left it to twist in the wind, giving it little marketing and even less product development money or effort. It wasn’t a very exciting car. The Taurus nameplate was replaced by the Five Hundred in 2006, rejoined the marketplace just a few years ago, and now the whole
Ford Taurus lineup gets a serious upgrade for 2013.

It wasn’t so many years ago that the “great American Sedan” was all about room and comfort. Ford is serious about rekindling that spirit with the new Taurus. Available in only one four-door sedan bodystyle, there are no coupe, convertible, stationwagon or SUV wannabe versions. Just a full-sized luxury sedan with a lot more room inside than Ford’s own Fusion, or Toyota Camry or Chevy Malibu, ad infinitum.

Ford’s design and engineering team focused considerable effort, and invested a lot of money, bringing the Taurus cabin up to scratch. The dash and instrument panels have been seriously worked over to make them more handsome and easier to use. There are soft touch, high quality materials everywhere you look and touch. No more cheap rental car-like cabin here. Even the plastic parts that look like brushed or satin-finished aluminum are a credible substitute for real metal. There’s also been a lot of investment into sound deadening and window sealing, and thus the Ford Taurus is quiet no matter how much racket is going on outside.

Cars don’t get much more family friendly than this. Four large doors open wide, and the car sits at a comfortable step-in height. And this thing is roomy for five, nearly cavernous for four. There’s plenty of room in every dimension for even the largest and tallest of occupants. The 2013 Ford Taurus trunk space is large and usable too.

Our first exposure to the 2013 Ford Taurus came in the form of a V-6 SEL equipped with all-wheel drive, lots of electronic toys inside, and leather interior. We were immediately impressed by its roominess, and the quality of the materials in the cabin. Everything looked and felt like good stuff, particularly the leather seat trim; in far too many Fords of the past, the leather was so heavily plastic coated for protection that it more resembled vinyl. Now it looks, feels, and smells like leather.

The 3.5-liter V-6’s 288 horsepower moves this big car along smartly. You wouldn’t call it fast, but its zippy enough, and can handle mountain roads and steep freeway onramps with aplomb. Ford claims it has worked hard to improve steering feel and response – that’s the connection you feel with the road through the steering wheel, and how quickly the car responds to your commands, and to that we say job well done. The steering wheel accurately telegraphs the road conditions, and the car goes where you point it.

A considerable effort has also been invested in making the car quieter, which it is. The rubber seals on the doors are beefy and multilayered, shutting out wind and road noise, and lots more sound deadening has been installed around the car and floorboard areas to reduce road rumble, all to good effect. This car is limo quiet, and very comfy. Our few complaints are that the all-wheel drive didn’t serve up the extra grip we expected when we hit a few wet, and slightly muddy patches on the road. The car never felt like it would spin out, but didn’t feel as locked on as we would have liked. That was a dissapointment, as was the semi-uncomfortable to use SelectShift button on the gear shift knob.

The MyFord Touch system is easy to read and use, and works as promised, among the best of the “computer command control” systems we’ve sampled. After a long stint in this car, we stepped up to the Taurus SHO, which absolutely lives up to its promise as Ford’s serious performance sedan. The Taurus is a big car; add an engine with two turbo chargers plus an all-wheel drive system, and its heavy too. But the SHO’s 365 horsepower moves it with enthusiasm, yet still delivers a respectable 17/25 mpg rating (not bad for a car this large and this fast). Step on the gas and the big V-6 responds with a lusty vroom and impressive forward surge. And it’s more than just a straightliner, as it handles the curves and hugs the road beautifully.

Big brakes help keep it all under control, and we love how the 2013 Ford Taurus SHO responds to your commands. Turn into a corner, and the car reacts and attacks the curve. Dial up the power and it pulls you through the corner and accelerates hard out of it. Without question, this is the “Driver’s Taurus” yet it still maintains a comfortable ride, and it’s never noisy or intrusive. If you fancy filling up a large sedan with family, friends, or party animals and making that quick blast to Vegas, this would be the right car to do it in.

The 2013 Ford Taurus is safe. But the airbag count, at just six for the entire car, is well below what most carmakers are putting in their vehicles nowadays. Many sedans from other manufacturers now come with up to 10 airbags standard. Still, the Ford Taurus uses the latest enhanced airbag restraints which optimize their deployment force depending on occupant size, position, and seatbelt status. The car also has Ford’s SOS Post-crash alert system, which blows the horn and flashes the exterior warning lights in the event of an accident. Traction control and a tire pressure warning system are standard, as is four-wheel disc brakes with ABS and AdvanceTrac Electronic Stability Control.

The Ford Taurus top tech toy is probably the MyFord Touch system, which replaces many traditional buttons, knobs and gauges with clear, colorful LCD screens and steering wheel mounted five-way toggles. These screens can be personalized to display information relevant to each driver by using voice command. MyFord Touch is powered by the latest version of Ford’s SYNC connectivity system (jointly developed with Microsoft) which allows voice control and hands free operation for certain vehicle functions, enabled Bluetooth devices, MP3 players and a wide variety external media. On some cars, these types of systems operate marginally, or are impossible to use without taking your eyes off the road, but the Ford’s works brilliantly.

The V-6 is the standard offering on all SE, SEL and Limited 2013 Ford Taurus models. The V-6 can also be had with optional all-wheel drive for those living in wet or snowy climates. The SE V-6 Taurus starts at $27,395. The Mac Daddy of the Taurus lineup is the SHO, which some people pronounce as “Show” but really stands for Super High Output. The 2013 Taurus SHO packs a twin-turbocharged 365 horsepower V-6 backed by a 6-speed automatic transmission. The Taurus SHO has aggressive front grillework and large 20-inch alloy wheels with performance tires. The SHO starts at $39,995. 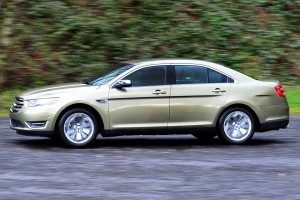 Ford has blended old school "Great American Sedan" (such as roominess, comfort, and luxury) with modern core values like somewhat improved fuel economy and top-notch entertainment to create a modern luxury sedan that's ideal for your daily commute, date night, or a road trip across the United States. No longer relegated to rental carstatus, the new Taurus is back in the game.

Not an American copy of a Japanese car; but a real American luxury sedan

The SHO just rocks; what a great performer, offering near BMW 5-Series packaging and performance for a lot less dough

The SelectShift buttons on the V-6 model’s floor shifter are difficult to use. Wish the Taurus had more airbags. And can’t say we much like the design of those SHO wheels either