The 2013 Ford Fusion Hybrid is an excellent green-mobile — so why is it that no one seems to know about it?

I am very glad you are reading my 2013 Ford Fusion Hybrid review, because today, I am not just going to write a review — I am going to CORRECT an INJUSTICE. I am going to RIGHT a WRONG. Not a big one, mind you; I don’t expect this article will result in Edward Norton winning an Oscar. (Jerry Maguire over Primal Fear? Really?) But it is my sincere hope that I can help the Ford Fusion Hybrid to get the respect it deserves.

How do I love thee, Fusion Hybrid? Let me count the ways. You have a roomy back seat and trunk. You have an excellent hybrid powertrain and a nifty space-age dashboard. You are exceptionally fuel-efficient. And, shallow though this may sound, you are very, very handsome. And yet, when people think of hybrids, who do they think of? Toyota. Not that Toyota doesn’t do excellent hybrids, mind you, but so does Ford. And among hybrid sedans — including the Toyota Camry, Hyundai Sonata, Kia Optima, Buick LaCrosse eAssist and Lexus HS 250h — I think the Ford Fusion is one of the best… and the most often overlooked.

If you equate hybrid with high-tech, you might be disappointed by the Fusion Hybrid’s conservative interior — at least until you start the engine and watch the dashboard light up like Times Square. Instead of traditional gauges, the Fusion has a big speedometer flanked by two colorful video screens. The driver can choose from four different display schemes that range from basic information (fuel and hybrid battery levels) to a detailed graphical overview of what the hybrid system is doing.

Dazzling dash aside, the Fusion is comfortable, spacious, and easy to see out of, although I wasn’t particularly fond of the eco-friendly seat fabric, which Ford says is made from 100% post-industrial recycled material. Judging from the coarse texture, I’d guess that my test car’s seats spent their past lives as potato sacks. If you prefer bovine to burlap, the Fusion Hybrid can be had with leather upholstery.

No question, the Fusion’s big back seat is one of its best features. It’s not as spacious as the Toyota Camry Hybrid, but it’s bigger than most other sedans, with enough room to accommodate kids from preschool to grad school. Like most hybrid sedans, the Fusion Hybrid loses some trunk capacity to the hybrid battery pack, but what space remains (11.8 cubic feet) is still very useable, with plenty of room for groceries, suitcases, or moderately-sized strollers.

The 2013 Ford Fusion safety resume is pretty modest; along with antilock brakes and electronic stability control, the Fusion Hybrid has just six airbags (many cars today have eight or ten). Still, that was enough to get perfect scores in the Insurance Institute for Highway Safety’s front, side, rear and roof-crush tests and an IIHS Top Safety Pick Award.

The 2013 Ford Fusion Hybrid offers Ford’s SYNC system, which allows voice control of your Bluetooth phone and iPod, reads incoming text messages, connects you to an operator for turn-by-turn directions, and can automatically dial 911 in the event of an accident. SYNC isn’t the only speech-recognition system on the market, but in my experience, it works better than any others — and the ability to communicate with your car by speaking, rather than taking your eyes off the road to fiddle with your phone or the stereo, makes for safer driving. Other nifty (and useful) options include a backup camera, a blind-spot warning system, and automatic rain-sensing wipers.

Ford’s hybrid system works much like the system found in the Toyota Prius. The Fusion Hybrid has both a 156 horsepower 2.5 liter gasoline engine and a 40 horsepower electric motor, the latter powered by a battery pack that recharges itself from the motion of the car. At low speeds, the Fusion can run on electric power alone, but for most driving the hybrid system automatically provides the most efficient mix of gasoline and electric power. The Fusion Hybrid is set up for low-speed fuel economy, and its EPA ratings are 41 MPG city and 36 MPG highway. That’s a bit less than the 2013 Toyota Camry LE Hybrid, which is rated at 43 MPG city/39 MPG highway (although the nicer XLE model is rated at just 40/38). During my week-long test drive, I got an honest 37 MPG, which I consider an excellent showing for such a roomy sedan.

One problem with the 2013 Fusion Hybrid is that it doesn't come cheap. Pricing starts at $29,495, two to four grand more than the hybrid versions of the Kia Optima, Hyundai Sonata, and Toyota Camry. But the Fusion does give you a lot for your money, with a long list of standard equipment that includes SYNC, power-adjustable front seats, dual-zone climate control, automatic headlights, and an auto-dimming rear view mirror.

But the value gets better as you add equipment. Spring for all of the options -- moonroof, blind-spot warning system, automatic rain-sensing wipers, rear-view camera, heated leather seats, and a navigation system with real-time traffic and weather -- and the Ford Fusion Hybrid tops out at $33,985. That's about $500 less than a top-of-the-line Camry Hybrid XLE (and, unlike the Camry, there's no fuel-economy penalty on the high-end model). Fully loaded versions of the Optima and Sonata are about $1,500 cheaper, but they lack some of the Ford's features, such as the blind-spot warning system and automatic wipers. 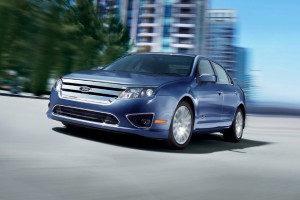 I think the Ford Fusion Hybrid is an outstanding car, one that provides big sedan space with excellent fuel economy courtesy of a well-engineered hybrid system. But judging from how few I see on the road here in hybrid-happy California, no one seems to know it exists! So now that you know, fellow Vroomies, I urge you to put the Ford Fusion Hybrid on your shopping list. Together, we can ensure that this excellent hybrid gets the recognition it deserves. And while you're at it, maybe drop a line to the Academy of Motion Picture Arts and Sciences. Edward Norton really deserves an Oscar.