If you find minivans to be as appealing as elective knee surgery, then the surprisingly great seven-seat 2013 Ford Flex is the family hauler you’re looking for — but just like knee surgery, it doesn’t come cheap.

I recently met a woman who told me that the reason she has only two children is that if she had a third, she’d have to buy a minivan. Well, Vera, if you’re reading this, take the kids to your parents’ house, light some candles, and send your husband out for a nice bottle of wine, because the 2013 Ford Flex is the big family car you’ve been looking for.

Outside, the Ford Flex is cool and stylish, a futuristic homage to the barge-sized wagons our mothers and grandmothers drove. The Flex has been restyled for 2013, and while the new front end makes it look a bit like an alien robot, I still like the way the Flex stands out from everything on the road. So hip and modern is the Flex that twenty percent of them are sold in my style-conscious home state of California, no mean feat in a state where American cars are about as popular as T-shirts that say “Kiss me, I have herpes!”

I like sitting in the Ford Flex; the front seats are supportive and comfortable and the view all around is excellent. While most cars have hoods that drop down out of sight, the Flex’s big, boxy nose stretches out in front of the driver, making it easy to thread this plus-size gal through tight parking garages.

But things get even better as you move to the back. The Flex’s second row is the place to be: It has big, comfy seats with acres of legroom. Back seaters get their own air conditioning controls; options include a 110 volt power outlet, DVD player, and even a small refrigerator that takes the place of the center seating position.

Most seven-seat SUVs have what I call an “occasional” third-row seat, a small, uncomfortable perch that eats up most of the cargo space and is best suited for short rides and short kids. Not the Ford Flex — its third row seat, while not exactly a Barc-A-Lounger, provides a passable amount of comfort. Tall kids and adults may hit their knees on the second-row seatback, but they do get their own cupholders, storage cubbies, and (most importantly) A/C vents. And even with the third-row seat in place, the Flex offers 20 cubic feet of cargo space, enough for a serious grocery run or suitcases stood on end. Folding the seat down opens up 43.2 cubic feet, enough to start your own package delivery business.

The 2013 Ford Flex is home to the Detroit company’s latest and greatest safety hardware. There are only six airbags, but the side-curtain airbags provide protection for all three rows of seats.

The electronic stability control system has Ford’s new Curve Control function, which rapidly slows the Flex if the driver accidentally carries a bit too much speed into a sharp curve or a freeway off-ramp. Ford offers an optional blind-spot warning system which not only works on the highway, but also warns of cars coming down the aisle as you back out of a parking space. For families with teen drivers, the MyKey system allows parents to program a “kids key” that will limit the Flex’s top speed and stereo volume.

Under its SUV-like skin, the 2013 Ford Flex is a close relative of the Ford Taurus sedan, so it rides and handles a lot like a car. The standard engine is a 285 hp 3.5 liter V6, but with the Flex weighing in at an elephantine 4,500 lbs., acceleration isn’t particularly strong. The basic Flex comes with front-wheel-drive, and there’s an optional all-wheel-drive system ($1,950) that provides great traction in wet and snowy weather.

If you want a little more excitement, you can opt for the EcoBoost engine, a high-tech, twin-turbocharged 365 horsepower V6. Available exclusively with all-wheel-drive, the EcoBoost engine makes the Flex feel like a sports car, and yet there’s very little effect on fuel economy: EPA estimates for the EcoBoost-equipped Flex are 16 MPG city and 23 MPG highway, compared to 17/23 for the regular all-wheel-drive Flex and 18/25 for the front-drive version.

But if you want to play, you’ll have to pay: The EcoBoost engine is a $3,150 option, and it’s only available on the top-of-the-line Ford Flex Limited model.

The 2013 Ford Flex is a showcase for the brand’s Department of Electronic Wizardry. My favorite option is the SYNC system, which provides voice control for iPod and the optional navigation system. (SYNC isn’t the only voice-command system on the the market, but in my opinion, it’s the best.)

My second-favorite is the self-parking system: Press a button and as you cruise down the street, the Flex uses sonar to search for a suitably-sized parking spot. When it finds one, it instructs you to stop the car, shift into reverse, and take your hands off the steering wheel, and while you work the brakes and shifter, the Flex steers itself into a perfect parallel parking job. (It’s worth taking a test drive just to see the self-parking system in action.)

Ford’s latest bit of electronic fanciness is the MyFord Touch system, which lets you control the stereo, climate, and navigation systems using thumb controls on the steering wheel and a small monitor screen on the dash. It’s an attempt to simplify the Flex’s secondary controls, but I think it’s backfired — if you want to change the temperature, it’s far easier to turn a dial or press a button.

MyFord Touch requires you to stare at the dash, when your eyes should be on the road. If MyFord Touch were an option, I’d suggest taking a pass; unfortunately, MyFord Touch is standard on all but the base-model Flex.

The Flex is sold in three trim levels: SE ($31,460), SEL($33,800), and Limited ($39,805). But those base prices are just the beginning. Buying a Ford Flex is like going to one of those candy-by-the-pound places: A Bit-O-Honey here, a couple of vanilla Tootsie Rolls there, and next thing you know you're paying $37.50 for five bucks' worth of sweets. The Flex has no shortage of desirable goodies; besides the electronic gizmos mentioned above, you can get leather upholstery, power-folding third-row seats, a four-panel vista sunroof, and who can do without that back-seat refrigerator? Next thing you know, you're looking at a Ford with a BMW price tag. The Flex I tested, a Limited model with all-wheel-drive and the EcoBoost engine, stickered for an eye-watering $49,210, and it didn't even have all of the available options -- it's possible to spend over $52,000 on a Flex. 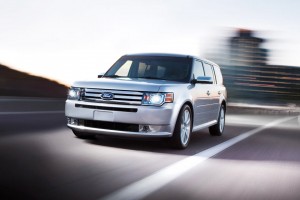 If you're like my friend Vera who can't fathom the idea of owning a minivan, the Flex truly is the next best thing. It's got tons of interior space, a flexible interior, loads of family-friendly features, and it drives more like a car than an SUV. The only real problem I see with the Flex is that Ford knows they have a good thing on their hands, and they have priced it accordingly -- $5,000 to $10,000 more than the most lavish minivans from Toyota, Honda, Chrysler and Nissan. You have to really not want to drive a minivan to spend that kind of cash. But I know at least one woman who might choose to do just that. Vera, if that third kid is a boy, what say you name it after me?

One Response to “Ford Flex”