Fiesta: noun (fēˈestə), origin Spanish,–an event marked by festivities or celebration.
The all-new 2014 Ford Fiesta aims to be, literally, a party on wheels. With some cool tech features, wild color options, and sporty handling, the Fiesta delivers on the fun factor.

I am always down for chocolate. Maybe that’s why the first thing that popped in my mind when I saw the lineup of the new 2014 Ford Fiestas parked side by side was that I could use a bag of M&M’s. Consider the similarities–both are small. Both are round. Both are popular. And I’m not sure if this was intentional on Ford’s part, but the color offerings are a perfect match for those colorful candy shells. (Van Halen style, of course–no brown ones allowed!) The shiny 2014 Fiestas of Blue Candy, Green Envy*, Ruby Red, and Molten Orange* looked as if they were ready to melt in your mouth, not in your hand. So without even starting the engine, the namesake and the colors alone get the Fiesta’s message across: we’re here for a good time.

Steering in the 2014 Ford Fiesta is firm and sporty–none of that loose, wobbly feeling, and it’s a solid, sturdy wheel. This makes turning and cornering responsive–I got braver each time I took a serious curve in the road and stayed in full control of the car. That’s what makes this car fun to drive. Having said that, it’s not the speed that makes it fun–don’t go challenging someone to a peel-out at the red light. The acceleration was okay, but it will not embolden you. Speeding up on a slight incline I did get a bit of that hiccup-y sensation (the car, not me!) that reminded me that I was in a small car with a 1.6 liter engine with 120 HP. But city driving is what this car was make for. Its origins are European (although this car is assembled in Mexico), so it makes sense that short jaunts and parallel parking are painless.

One interesting note about the Fiesta is that according to Ford, about 20% of its U.S. drivers choose the manual transmission. That’s way above the average for stick shifts sold in America. All of the models available, from the base model to highest, are available in both manual and automatic, except the top ST sport model–which is manual only.

For a car this small, the 2014 Ford Fiesta interior is surprisingly nice. The top of the dash is covered with a soft touch material and a cool pebbly texture. The center controls are well laid out and easy to find and operate. The interactive screen (more on this in Gizmo section) is placed high in the dash, which isn’t particularly attractive aesthetically. However, this keeps your eyes focused higher up while looking at the screen–since it’s closer to the windshield–which is admittedly safer.

The cubbyhole spaces–cup holders, center console, glovebox, and trunk– are plentiful but small. Nothing could fit my iPad except the trunk, so be prepared to downsize your purse if you want to store it out of sight. The trunk opening on the coupe is pretty tight as well, which could be a hassle if you’re hauling around a baby stroller or make regular pilgrimages to Ikea. The 60/40 back seats do fold down, but not by much–a far cry from Honda Fit’s fully flat back seats. The hatchback fares a bit better, and looks better doing it.

One very pleasant surprise was the headroom for the driver. At 5’6”, I’m no supermodel, but many sub-compact size cars leave me bumping my head on the top of the roof. The 2014 Ford Fiesta, however, gave me several inches of head-to-roof clearance–helpful if you’re considering buying this car for a taller teen or if big 80’s hair comes back into vogue next year. You don’t get near as much room on your sides–elbow room is pretty tight. Make sure you like the person in the passenger seat, because you’ll almost be holding hands from the get-go.

As we often stress here at VroomGirls, driving a small car doesn’t mean you’re sacrificing safety. In fact, a new small car can be safer than a big vehicle. Every year, more safety features become mandatory for cars sold in the US–such as Electronic Stability Control and assisted braking systems. These help prevent accidents, and are especially good for younger drivers. The Fiesta adds a driver side knee airbag to the regular six (two front, two side, and two curtain). Another interesting safety feature, called MyKey, will be popular with parents, but not so much with kids. It’s basically like getting “admin” rights to the car. Limitations can be decided in the digital control panel. One, for example, mutes the music in the car unless the safety belts are engaged. Maximum levels for speed and music volume level can also be set. Teens may not like that Big Brother is watching, but if Big Brother is making the payments, they’ll just have to deal.

Ugh, the backseat! The 2014 Ford Fiesta has plenty of room for a carseat and/or a small child, but not much headroom or legroom for even an average size adult. In a smaller car, bodies inside are going to move as the car turns–that’s just physics. But the design of the seat can have big effect on how much you feel the motion–and how much your butt goes sliding around in the seat.

The front seats were okay, but the back seats didn’t seem to offer much bolstering on the sides. If you rarely have a backseat passenger, this isn’t a dealbreaker. Likewise, if your toddler is strapped securely in a carseat in the back, he’s fine–the Fiesta does come with LATCH car seat anchors. But this might be a concern if you have kids who need to ride in the back until they’re 13–especially if they are prone to carsickness. If you have kids, take them on the test drive with you to avoid any unpleasant backseat surprises for them or you. Likewise, adults who get motion sickness will want to ride shotgun in this car for sure, not in the back seat.

The 2014 Ford Fiesta has its sight set on the millenial generation (and their parents) so it is rife with the techy stuff. That includes Ford SYNC, voice-activated communications and entertainment system, even on the base entry S model, along with USB inputs and an input jack. The SE adds a message center and the aforementioned MyKey, and the top Titanium level adds MyFord Touch, a 6.5-inch touch screen with SYNC services (GPS, traffic reports, and info services). Both an Android phone and an iPhone synced up quickly and easily with the info system. All mirrors on the 2014 Ford Fiesta have an imbedded blind spot mirror, which could be helpful after you get used to it–but it does cut your rear-view real estate by about 1/4, which is a big loss. The interior ambient lighting feature allows the driver to choose red, blue, purple, orange, aqua, white or yellow-green to light up her nighttime drives. Will this change your life? No. But is it cool? Yes. A capless fuel filter aids the absent-minded while fueling. For creature comforts, partial leather-trimmed seats and seat heaters are both available as an option. 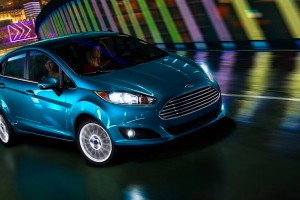 The 2014 Ford Fiesta is a great car for some--as long as you consider its limitations. The updated look gives it a stylish new profile, and it’s a good-looking car. Gas mileage is good, as you would expect from a small car in this class. All of this can make it a great first car for a teen, college student, a single person, or anyone who wants a new car with cool stuff for under $20k. You also have a huge amount of stuff to choose from as far as options go for car this small. An eco-boost engine will be available later this year, making the matrix of possible style/color/interior/engine combos even bigger. And like M&M’s, which were limited back in the day to only plain or peanut, there are a plethora of combinations--and prices--available to suit your particular taste. White chocolate with a mint coating and a pretzel center? Sure. Blue Candy exterior with partial leather seats, manual transmission and a GPS, but no spoiler? No problem. Prices can range from a modest $14,000 to just under $26k, with lots of stops in between. There are a lot of desirable options, but they add up fast. If you are more often that not hauling around clients, a bunch of friends, more than one kid, or just a whole lotta bulky stuff, the 2014 Ford Fiesta may not be the party you’re looking for. But a very non-scientific observation of the freeway during rush hour will confirm that the majority of people driving are in the car alone most of the time--or at the most with one passenger. If that describes your driving habits, this car is a very good one to consider. *The extra-juicy colors--Green Envy and Molten Orange--will cost about $600 extra. Expressing yourself through your bold fashion choices will save you money--said no one, ever.

One Response to “Ford Fiesta”