The Ford Explorer is one of this American brand’s winning models – capable, better fuel economy than in the past, and great looking

Twenty-five years ago, the Ford Explorer helped to kick off the SUV craze — some of us were probably hauled around in an Explorer when we were kids. But times change, and so has the Explorer — it underwent a major makeover just last year. Ford abandoned the Explorer’s previous boxy upright SUV theme; now it has a contemporary look with wrap-around headlights, a bold horizontal grille, glittering trapezoidal LED lights taillights and optional beefy 20-inch wheels (18-inch are standard). I’m particularly fond of how the lines of the Explorer all flow into each other from the grille to the headlights to the sweeping side lines on into the taillights.

There is a lot to love about the new Ford Explorer, but ride and handling aren’t among them. And that was kind of disappointing. It’s roomy, with a length of 197.1 inches, but after driving the similarly sized Dodge Durango, I expected a little more. Where the Durango drove small and was very maneuverable, the Explorer felt oversized and drove like a boat.

Another problem I encountered as a petite female was the high belt line – this is the height of the door and sides. In addition to creating some visibility issues, it contributed to the aura of bigness. Clambering into the driver’s seat and shutting the door, I felt like I was being swallowed whole by a whale.

The Explorer’s ride is soft and mushy, meaning I felt like the car wasn’t as connected to the road as I would have liked. And its turning radius was not great. Just try and make a U-turn on an average-width road. It won’t happen. Combine that with the high belt line, and you have a car that looks large, feels large and drives larger.

The good news is that the standard engine has plenty of power to get this whale in motion. The 3.5-liter, V-6 delivers 290 horsepower and 250 pound-feet of torque. That means it can zip from a standstill pretty fast. And whether I was taking off from a stop or needed a little boost to pass on the highway, the engine rose to the challenge with nary a grunt or groan.

Looking for better fuel economy that doesn’t sacrifice power? Ford has a powertrain for that. The 2.0-liter, I-4 EcoBoost engine makes very few compromises with direct injection and turbocharging that combine to deliver 240 horsepower and 270 pound-feet of torque. Fuel economy gets a nice bump at 20 mpg in the city and 28 mpg on the highway. But you’ll pay about $1,000 extra for the privilege.

One of the coolest gadgets on the Ford Explorer is Sync. However, some of my colleagues say it’s difficult to use. I think it just takes time to learn the system. When I get a new cell phone or computer, I spend some time with the manual. The same should be done with a car and its gadgetry. Sync is quickly demystified.

I will admit, you need to be at least a little tech savvy to figure out Sync. Take, for example, the phone pairing in the tester with the optional voice activated navigation and Sirius XM Travel Link. Upon entering the phone quadrant, the car immediately recognized that no phone was paired and prompted me to begin pairing procedures on a new phone. It provided a password and took mere seconds to find my phone.

Since I have an hour’s commute, a paired phone is important. That’s when I catch up with friends and family. I’ve struggled in the past with the Volvo S60 and Land Rover LR4, and this Ford pairing process was a refreshing change.

After getting everything paired and wired in, the voice commands are relatively intuitive. While I had a couple misses that changed the station instead of calling mom and dad, Sync mostly worked the way it was supposed to. But to be honest, I do hear a few complaints from my auto critic friends that Sync isn’t as easy to use as it should be.

The eye candy continues inside, with 3D-effect gauges surrounded by brushed nickel that look absolutely stunning/ The seats and dash are smooth, simple and uncomplicated. Whether you go for the standard cloth or the up-level leather, the seating surfaces are perfectly plain. The seats themselves are comfortable and very adjustable — easy to get just the right position for both tall and petite drivers. Though if you have kids, you might want to opt for the Charcoal Black over the Medium Light Stone.

Where the Explorer’s interior loses its way is with the buttons on the center stack and the distracting layers of menus on the center screen and dashboard, part of the MyFord Touch system. Though perfectly symmetrical, they can be a bit much to take in. Too much to look at while you should be concentrating on the road.

As a single woman without kids, the idea of a minivan is hard to take. I understand the need to store stuff and haul children, and the concept of carpool, strollers and diaper bags. And, though I’m not in that life stage, I’ve driven enough minivans to get geeked about their utter functionality. But I don’t have to like the exterior trappings. And I have to imagine, that won’t change, even if I do have kids someday.

If you have a family, and you’re like me – you don’t like the look of a minivan – where can you turn? The Ford Explorer is a good place to start. In addition to a nice exterior package, it seats up to 7 (only 6 if you get the second-row captain’s chairs) and has 21 cubic-feet of cargo volume behind the third-row seat, which is more space than most trunks offer. Total cargo volume is a whopping 80.7 cubic-feet.

The third-row seat is plenty big for a small adult (aka me) or a 10-year-old child. The second row flips with relative ease for entry to the third row, and a limber person can climb into the back. The second-row comes standard as a bench, but you can upgrade to optional dual bucket seats at the Limited level. The optional power liftgate and rear folding rear seats are just icing here.

The Ford Explorer a great choice for the family “Truckster” because there are many standard safety features included at the base-level model. In addition to the usual suspects of LATCH (child safety seat connectors), front side airbags, side-curtain airbags and traction control, there is an SOS post-crash alert system, which unlocks vehicle doors and activates the flashers and horn when a crash is so severe that the airbags deploy.

Beyond the base-level Ford Explorer, another optional safety feature enters the scene that plays cool in the family realm: The industry’s first inflatable rear outboard seat belts, which help cushion the impact for small children.

While the Explorer is certainly more attractive than a minivan, beauty comes with a price. A steep one. The starting MSRP for the base Explorer is $29,105, and it includes basic Sync, dual-zone automatic climate control and automatic headlamps. The only package available at this level is the Trailer Tow. If you wantf the cool optional stuff, you'll have to level up -- and tack on at least $3K to your base pricing.

The good news: All trim levels are available with FWD and AWD, and a each have the option of the 3.5-liter V-6 or the I-4 Ecoboost engines. So, let's break down the key standards by trim:

A variant of the XLT package, the Sport comes exclusively with the top-of-the-line EcoBoost V6 engine and all-wheel-drive, along with a sport-tuned suspension and racy exterior trim. 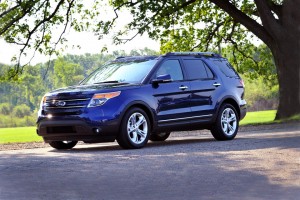 While most people don't need a 7-passenger vehicle, families will find it an attractive choice, especially when its fully loaded with all the options. Similar to a minivan, it can haul both people and stuff. But, unlike a minivan, the Explorer is actually cool.