The 2013 Ford Escape is built with the young woman in mind. Snazzy styling, good fuel economy and great cargo capacity make it a must on your test-drive list.

Picture This: There’s a woman named Carrie. She is a young professional in her late 20s or early 30s. She balances fun, sporting activities and a career. She’s shopping for a new vehicle and wants one that’s sharp enough to pick up her boss for a business meeting, yet useful enough to fill up her trunk with DSW boxes after a little shoe retail therapy with girlfriends.

Carrie is the target Escape buyer, according to the Ford Marketing team. But she doesn’t exist. The team dreamed her up in order to understand who would buy the new Escape. But indeed, she does exist. She could be you.

Ok, so Ford is aiming for us gals…but we know the men folk will spark to the 2013 Ford Escape, too. Even they like style and practicality sometimes.

I admit to not liking the previous generation Ford Escape. I know, I know. Many of you will disagree with me. But I hated the fit and finish, the materials (hard plastics everywhere) and frankly, the ride quality of the old Escape left a lot to be desired. It also looked like every other SUV parked at the mall.

Hello 2013 Ford Escape! Pretty, stylish and contemporary. Yes, it’s living with updated looks, like an easy to read gauge cluster, punctuated with illuminated turquoise needles on the speedometer and RPM dials. A high-gloss piano black trim adorns the trim, and finally, the steering wheel both tilts up and down and telescopes in and out, all the better to reach a comfy fit for us height-challenged ladies.

Front seating is comfortable for women and men of any size. And soft rubber trims the doors where you’d rest your arm below the window line, a nice upgrade from those horrible hard plastics. But backseat passengers aren’t so fortunate. The seats are hard and not as comfortable as they should be. It could be a problem on long trips for adults used to softer materials. Also, I’m disappointed that Ford chose to use hard plastic trim on the rear door armrests, just like the previous generation. Backseat riders deserve better. However, I’m happy with legroom both front and back, and cargo space is generous even without the backseats folded flat.

In a word: excellent. The 2013 Ford Escape feels tight, well built and handles beautifully in sharp turns. I drove the top-of-the-line Ford Escape Titanium model, which comes equipped with 4-wheel drive and a 2.0L, 4-cylinder EcoBoost twin-turbo-charged engine with loads of power in the lower gears. That means that when I stomped on the gas pedal, the Ford Escape moved. Nothing bad to report here.

As for towing, the 2013 Ford Escape is rated to tow 3,500 pounds. That’s enough to haul a motorcycle, a couple of jet skis, a small boat, and even a little U-Haul trailer…so you can move into new digs without asking your ex-boyfriend for help!

There’s plenty here on the 2013 Ford Escape. The best tech feature is the hands-free lift gate. Ford isn’t the first manufacturer to have it, as it came out earlier this year on new BMW 3-Series models. But it’s great. Just kick your foot underneath the Escape’s rear bumper and Voila! The rear lift gate magically opens without needing to put packages down and fumble in your purse for the key fob. Sheer genius.

Ford My Touch is included on the 2013 Escape. This is Ford’s proprietary telematics, which includes hands-free manipulation of phone, audio and navigation. 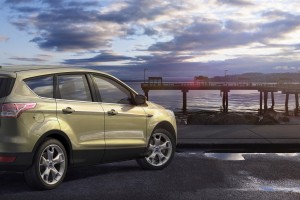 A huge leap forward for the Ford Escape. Everything you'd want in a small Crossover / SUV.