Put on that flirty skirt, those strappy heels, just the right shade of Eat My Dust red lipstick, and push the Start button on your Audi R8. Then watch the boys cry as you leave them wishing they were riding shotgun for a change.

Know why? Cause men may think the bad boy Audi R8 is just for them but I beg to differ. What’s sexier than a wily woman driving an exotic two seater? The 2014 Audi R8, the company’s halo sports car, comes in three flavors: a V8 coupe or convertible with 430 horsepower, a V10 coupe or convertible with 525 hp, and a sport-tuned V10 Plus in hardtop only that produces a shocking 550 hp. In other words, fast, faster, fastest.

The 2014 Audi R8 looks complicated, sophisticated and determined. But don’t let its exotic looks intimidate you. It’s actually a breeze to drive. No, really. Sure, it accelerates much quicker than the average ride, but steering (which is sharp and precise) and working the brakes are exactly the same as they would be on any car.

The Audi R8 V8 version has a 0-60 mph time of 4.3 seconds. That is about the time it would take the world’s fastest man, Usain Bolt, to run a 50-meter dash. If that’s not fast enough for you, test drive the 2014 Audi R8 V10 edition. This beast has a larger engine that rockets to 60 mph in a neck-snapping 3.6 seconds. And if you’re still unconvinced that’s quick enough, opt for the V10 Plus model, which twist ties your hair in 3.3 seconds. All have a top speed of 196 mph – and if you’re lucky enough to find a legal place to hit that mark, then you’re one very fortunate gal!

If you’re into the new sport of hyper-miling (altering your driving style to get the most miles out of a tank of gas), then the Audi R8 is not for you. Obviously, all this G-force-packed power comes at a price – and you’ll feel it at the pump. The V8 version, because of its slightly smaller engine displacement, gives the best fuel economy at 14 mpg city/23 hwy; both the V10 and V10 Plus models received EPA ratings of 13 mpg city/22 hwy. All fuel economy numbers listed are for Audi’s dual-clutch 7-speed automatic transmission. A six-speed manual transmission is also available on all models, and receives a one-mpg reduction in both city and highway driving.

Once you test drive the 2014 Audi R8, you’ll be hooked on its refined yet passionate baritone growl. It’s what power sounds like. But for those who want additional musical accompaniment, the R8 comes standard with a Bang & Olufsen 12-speaker, 465-watt sound system.

Each model 2014 Audi R8 comes in all-wheel drive. This makes the car hold tight in corners better than standard two-wheel drive, and provides power to individual wheels should they begin to slip or skid. All-wheel drive performance is superior in wet-weather driving, too.

The 8-way power leather seats, including 4-way lumbar support settings, are heavily bolstered at the thighs and torso to keep you in place while cornering. Opt for the very stylish diamond-pattern stitching ($4,500 extra), contrast stitching ($250), and the suede-feel Alcantara roof liner ($1,300) to up the luxe factor.

The 2014 Audi R8 V10 Plus is technologically state of the art. It weighs 130 pounds less than the V10 version, thanks to its lightweight ceramic brakes, ample use of featherweight materials like carbon fiber, and less use of sound insulation, which can be very heavy. This reduction in weight allows the Audi R8 V10 Plus to get the same fuel economy as the V10 model, even though it achieves an additional 25 horsepower and is a third of a second faster.

Speaking of ceramic brakes, they take some getting used to. They are preferred by fast drivers because they resist heat, and over-heated brakes can fail. Ceramic brakes are excellent at stopping cars traveling at high speeds. But they are touchy, meaning that just a little pressure from your foot translates into a lot of stopping power. Ceramic brakes come standard on the Audi R8 V10 Plus model.

Luxury is abundant in the 2014 Audi R8. Unlike some sports cars that are stripped bare of creature comforts just to hammer home the notion that the car is all about driving and nothing else, Audi remembers that its drivers also want pretty in its fast package. To that end, contemporary gauges are rimmed in aluminum, and the signature red digital readouts are clear and stylish. Everything that one touches inside the car is touchable – soft rubber materials, nubby dials, it’s all interesting and modern.

Check out the flat-bottom multi-function leather-wrapped steering wheel, which accesses the Bluetooth, phone, audio, on-board computer and cruise control features of the car. A rear-view backup camera is standard, as are LED headlights and daytime running lights.

Spoiler Alert: the 2014 Audi R8 rear spoiler automatically pops up when the car reaches 75 mph, and retracts when it dips below 50 mph. The spoiler acts to keep the rear of the car firmly planted on the road, since a fast-moving vehicle tends to want to lift up, making traction more difficult. Of course, a fast driver wants the spoiler to do its job. Only one problem, if the spoiler deploys at 75 mph, won’t it be a tip off to police that you’re being naughty? 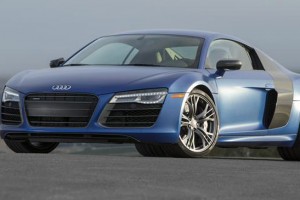 Audi upholds the joy of driving in the 2014 R8, and gives us even more to love with the super-quick V10 Plus engine. It's hard not to want one.

Not a teenage boy's dream, but instead a serious sports car

Luxe appointments in addition to great handling and speed

One Response to “Audi R8”