And you thought the Fiat was merely cute. Some models may seem like a kitten but this one acts like a tiger. And the interior looks kinda nasty, too.

In the last couple of years, Fiat has made a triumphant return to the U.S. It had been a couple of decades since the brand had a dealership here. Car lovers rejoiced that this fun Italian marque brought its adorable bite-sized Fiat 500 to our shores. It handles well, it makes you smile just to look at it, and it’s surprisingly roomy and comfy inside. The main criticism of the Fiat 500 has been that it’s not zippy enough. Some won’t care about acceleration but others do. And if you’re one who cares to beat everyone off the line at a stoplight, the Fiat 500 Abarth is your car.

This model is named after Karl Abarth, a winning sports car maker who launched his company in 1949. Abarth partnered with Fiat 45 years ago, which resulted in cars that won nearly 900 races and set six international records. Not bad. And to signal that the Fiat 500 Abarth is no kitten, Fiat slapped Abarth’s name – and all that it stands for – onto the car, along with Abarth’s edgy scorpion logo, just so you’ll know that this car stings!

But it’s not just hype. I took the Fiat 500 Abarth onto a racetrack outside of Las Vegas and whipped it around a few times. This is every bit a sports car, albeit one that gets pretty impressive fuel economy. It handles beautifully, accelerates on demand, and stops when you want it to. And even when fully loaded with navigation, et al, it retails for about $26,000. Hard to find a sports car for that price.

The Fiat 500 Abarth leads with design. “Small but wicked” is what people used to say about Abarth’s cars in the 1960s. This kitten is scrappy. OK, it’s downright masculine and nasty. You gotta hand it to the folks at Fiat for manning up a car that has exuded wonderful feminine touches in the regular Fiat 500. The Abarth edition is very male, though as a woman, I like it for its aggressive appearance and exquisite performance.

The Fiat 500 Abarth’s front is purposely more pronounced than the standard Fiat 500, and it’s blacked-out, which makes it look wicked. It also has more angular body cladding on the sides, which have the added benefit of improving aerodynamics. Two large chromed exhaust tips look sporty, and give a fantastic throaty sound. There’s also optional triple stripe decals with matching side mirror colors in Rosso (Red), Nero (black) and Blanco (white). That package sells for $275. And the car itself only comes in four colors: black, white, red or gray.

Inside, the lines are clean and contemporary. A thick Abarth steering wheel has super-soft perforated leather and is flat-bottomed so that enthusiasts who like to drive with the steering wheel low down will have more room above the thighs. Cruise control, sound system and hands-free phone controls are on the steering wheel so there’s no need for the driver to take her eyes off the road.

The Fiat 500 Abarth is a two-door, four-seat coupe. Though it’s not super simple for tall adults to wiggle into the backseat, it can be done. A good game of Rock, Paper, Scissors will suffice to decide who gets to be the front passenger. Seats come standard with a sporty cloth material, though leather is an added option for $1,000. A sunroof ($850) brings even more openness into the cabin.

I like the black leather dashboard trimmed in red stitching, the leather shift knob to match, and the aluminum foot pedals, for an added racy look.

I love attending press launches for cars. This is where the brand’s marketing folks tell us who they think will buy the car and why. During the Fiat 500 Abarth press conference held in Las Vegas, the marketing guy, saying he’s stealing a line from the Vegas spin doctors, said, “This car is just the right amount of wrong.” In this case, the marketing fits the product.

A quick comparison ride in both the Fiat 500 and the Fiat 500 Abarth will easily reveal the cars’ differences. Instantly, you’ll feel how much stiffer the Abarth’s suspension is, allowing faster cornering and better handling on twisty roads. This is especially true at high speeds. Most of us won’t drive so fast that it matters. And not all of us will prefer the stiffer feel of the Abarth’s ride, liking instead the softer ride of the regular Fiat 500. And it only comes in one transmission: 5-speed manual. So if stick shift is your thing (and this one dons a great short-throw shifter), here’s yet another reason to love this Fiat.

The Abarth’s steering feels different, too. It’s tighter, so less movement or turning of the steering wheel is needed to make a course adjustment. Also unique to the Abarth versus the regular Fiat 500 is the Electronic Stability Control system (ESC), which comes with three settings instead of just on or off. The ESC on the Abarth allows for “On”, “Partial Off” and “Full Off” so that in racetrack situations, the Abarth can drift a bit around the track without the car’s safety intervention preventing it from losing traction.

The Fiat 500 Abarth comes standard with 16″ wheels. For $1,000 more, opt for the 17″ forged-aluminum wheels with all-season Pirelli P-Zero tires. Snazzy. On a long drive through the Nevada desert, my driving partner and I noticed some wind noise coming into the cabin, but no tire noise, which is more annoying than the wind. So the Fiat’s soundproofing is excellent.

Driving is a delight. Here’s what you feel: a taut, but not too taut, suspension that feels solid in cornering and handles beautifully on curvy mountain roads. There’s pulling power (torque) no matter what speed the car’s doing. The turbo charger makes sure to give plenty of power in any gear.

Friends always ask me whether a small car can be considered safe. I always say yes. In many ways, a small car can be safer in that it’s easier to negotiate out of some sticky situations in a smaller car than in a honkin’ large SUV. In many cases, it takes longer to stop the locomotion of a large SUV than it does a small vehicle.

The Fiat 500 Abarth comes standard with a variety of safety features. There are seven airbags, including: Side-pelvic-thorax, driver’s knee, full-length side-curtain and two front airbags. And it wears larger, more powerful brakes than the standard Fiat 500 for greater stopping power. The brake calipers are painted red for a sporty, athletic appearance, so that the car looks as great stopping as it does starting. Of course, that has nothing to do with safety.

A lot of the gizmos in the Fiat 500 Abarth have to do with its performance prowess. The Fiat engineers built the Abarth to be track ready. Most people will never bring the car onto a track, either for lack of opportunity or desire. But it’s nice to know it’s there if the mood ever strikes. Kind of like living in a coastal town but never going to the beach.

Creature comfort techie gadgets are held to a minimum in the Fiat 500 Abarth, as driving is the focus. There’s an optional TomTom navi system ($400) that you stick onto the top of the dashboard and remove when you’re not using. It is awkwardly placed and reduces vision a bit, since it sits so high atop the dash. Also, when not in use, you should remove it so it doesn’t tempt a thief to break a window to get at it. Then, of course, you need to stow it somewhere. All in all, I am not a fan of this navigation system. 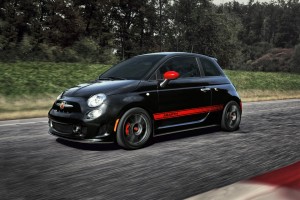 The obvious competitor to the Fiat 500 Abarth is the Mini Cooper S. Unlike the Mini, where the suspension can be rough, this Fiat has a better, smooth, less jarring ride. Passengers say they feel less jostled on bumpy roads. Smoother ride, yes, but still sporty when it counts.