There is Bacchus, god of wine and revelry; Venus, goddess of love and beauty; and Platus, god of wealth. Had the Romans invented the internal combustion engine, surely they would have created a god of acceleration. His name would have been Ferrari.

I know this because I’m fresh from driving the new convertible version of the 458 Italia, called the Ferrari 458 Spider, in the hills of Liguria, Italy. It is the latest Ferrari to hit the Via Veneto — as well as Rodeo Drive, Worth Avenue and Central Park South.

A button pops the hardtop, which folds neatly into the trunk in 14 seconds. Then it’s open-air bliss. Press the big red ignition button on the steering wheel, which rouses the stallion’s engine — a crazy, masculine, emotional sound that sends a thrill down my spine.

Once on the open road, I let her rip. Pushing on the gas, a few things happen. The Ferrari 458 Spider blasts forward, as if shot from a battleship, and the baffles open to create a sound fury in a perfectly tuned exhaust note right behind my ears.

There is an overwhelming sense that all is right with the world. Like a wave of extreme luxury, akin to sleeping on 700-thread-count Frette sheets, or slipping on a pair of Gucci loafers, or sipping Prosecco at sunset on the Amalfi Coast. I could go on…but I’ll just cry.

The 458 Italia and Ferrari 458 Spider are the latest generation in a long line of V8s from this hallowed Italian marque. The 4.5-liter, V8, 562 hp engine is thrill-a-minute fast. Actually it takes a fraction of a minute to feel that thrill, going 0-62 mph in a striking 3.4 seconds. It’s dizzyingly fast.

I take this baby on a seriously twisty mountain road, loaded with tight corners, off-camber drops and elevation changes. It’s a virtual playground for sports car crazies. Like me! The concern always with a convertible is that the car will not be as rigid as its fixed-roof hardtop counterpart. But try as I might to feel the 458 Spider flex under heavy acceleration and twisty conditions, it just stays planted and stable. Just perfect.

The steering and handling is so precise that the second you think about turning, the car turns. Frankly, the way the 458 slices through tight corners, well, it just ruins you for driving anything else.

The dual-clutch automatic transmission is lightening quick and absolutely smooth in the gear transitions. You feel not a bit of hesitation when the gears move up or down, no sense of weight shift. Dual clutch is a big leap forward in transmission technology, since gearshifts happen fast, and you can’t feel that normal hesitation in acceleration between gears.

It would not be an Italian luxury product without a lot of stitched leather. And so, the 458 Spider has ample amounts of it – on the dashboard, on the seats, on the door panels, even on the headliner, which is car-speak for the roof liner. It’s soft and impeccably stained in a variety of rich colors.

A super grippy leather steering wheel is equipped with several necessary features: turn signal buttons are actually on the steering wheel, not on a stalk attached to the wheel. A little toggle on the wheel changes the car’s suspension to give optimum performance whether driving in snow or rain, dry pavement, or a racetrack, should you get the urge to really let your hair down (or, rather, up – in a helmet).

There are no cup holders. Honestly, do you really want to be sipping from a Big Gulp while tooling around town in a Ferrari? What would your jealous friends think? But there is one cheapo item I discovered in this otherwise impeccably outfitted carriage, the velvet-like lining on a tiny center-console tray (which is just deep enough to hold a cell phone or parking pass) feels, well, cheap. The velvet isn’t of the type like a fine English ribbon. Instead, it feels kind of polyester. Not at all befitting its surroundings.

The Ferrari 458 Spider meets all American safety standards mandated through 2020, should you drive like a sane person. It has just two airbags in the front for driver and passenger. But in a lightening-quick sports car such as this, the first word in safety is always “driver.” After that, the “B” pillars, which are the bulbous arms that extend behind the seats, act as roll bars, if the 458 happens to flip. But that should never happen. (See: first word in safety, “driver.”)

Traction control works amazingly well in cases where the 458 begins to skid. The technology takes over the braking function and puts the vehicle back in line.

The Navigation system in the Ferrari 458 Spider works great ($3,404). The Harmon-Becker sound system, with nine JBL speakers is adequate but not amazing. A more premium 11-speaker system is better, but at about $4,800 it’s hard to justify. So, too is the iPod connectivity charge of about $900. You’d think a Ferrari would have the best audio system on the market. It does. It just doesn’t come from those JBLs.

No need to worry about arriving at your Via Veneto hotel empty handed, or, God forbid, with mismatched luggage. This luxury Italian car brand has coordinating leather goods. A five-piece set (approximately – it’s sold in Euro pricing – $10,950) is embroidered with the Ferrari logo and dyed to match your 458 Spider’s interior. And should you want to hit the links, the coordinating golf bag is a steal at approximately $6,750).

Like all Ferraris, the 458 Spider is basically a bespoke machine. It comes the way YOU want it to. With the type of leather you want, with or without coordinating piping. And you can order racing-style seats, or not. So to price or spec out a car like this, it’s all about one-offs. It’s likely if you order a 458 Spider, yours will be the only one like it. Price starts at about $275,000. But that’s for a stripped down model, and who wants that? 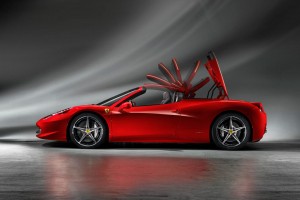 The Ferrari 458 Spider is the ultimate expression of a sports car. Stunning to look at but not just a pretty toy. It's the real deal.

Try not to giggle as you blast through the sound barrier.

The melodious engine is second to none.

The audio system sounds tinny. Maybe so we'll listen to that glorious engine instead.