And that’s fine. You just have to set realistic expectations before you buy and then get behind the wheel. While it will win you points with the carpool crew, it’s not going to get you many admiring glances from the hot guy on his daily run through your neighborhood. And, just so you know, people will try to pass you on the right — in an exit lane — because they think you’ll go too slow. I say let them try. Especially if you happen to be driving a Dodge Grand Caravan.

The V-6 engine in the Dodge Grand Caravan is a force to be reckoned with. While I don’t love this same engine in the Chrysler 200, Dodge absolutely got the power equation right in its minivan.

Mated to a 6-speed automatic, the 3.6-liter V-6 is both plenty quick and plenty smooth. Delivering 283 horsepower and 260 pound-feet of torque, it performed well in city driving with its tricky fast starts to make it through tight gaps in traffic, and it did just as well for those fast-paced highway merges and maneuvers.

Here’s the point in the article where I admit I don’t have kids. So the practical application of putting child seats in the second-row captain’s chairs is completely beyond me. But I will tell you I recruited a friend with 3-year-old twins to take a look (OK, it was more like go outlet mall shopping), and she commented on the overall roominess and ability to store kid stuff like strollers and diaper bags and toys.

Personally, I look at the Grand Caravan as a vehicle that could take on the outlet mall and let me hide all my purchases in the Stow ‘n Go … An excellent feature should I have a prying boyfriend who wants to know what I’ve spent. None of his business, I (and the Grand Caravan) say.

Speaking of Stow ‘n Go, I was so impressed with the enormous hidden cavity and its capacity to hold a vast amount of stuff, I wondered if it could swallow a 95-pound , 4-foot 11-inch auto writer whole. So I stuffed myself in the compartment. I almost fit, and I’m sure I could have gone completely in if I wasn’t concerned about getting stuck. I had visions of Dodge dismantling the back to get me out.

The test vehicle was equipped with what I call necessary optional equipment — especially in the family arena — and that was the Entertainment Group No. 1, which includes wireless headphones, a 9-inch screen and DVD player. While I don’t have kids, I’ve driven enough of my friends to realize that the $1,300 option is worth every penny. When minivans make this standard, I might even be willing to call them cool. Maybe.

The test vehicle was a Dodge Grand Caravan Crew with a base price of $28,695. This top-level model came really well-equipped with standard features like a power sliding rear doors, power adjustable pedals, third-row power vented windows, Sirius Satellite Radio and steering wheel audio controls. I was a particular fan of the power sliding doors that would allow easy access when your hands are full. The optional power lift-gate ($425) is another fave because of the hands-full issue. I could also figure in the “I’m short” factor, so the easy up and down with a click of the button always makes my tops list.

While there are a lot of standard convenient features, the test car added almost $6K in options that makes the idea of a minivan a little easier to swallow. The passenger convenience group ($595) adds heated second-row seats, and the driver’s convenience group ($810) adds heated front seats and steering wheel as well as Bluetooth connectivity. Other options on the test vehicle included 9 Infinity amplified speakers with a subwoofer ($795), and a media center that includes navigation ($695).

The interior is well thought out. The placement of all the buttons and dials is within easy reach of this petite driver’s fingers — even when pushing the seat back a little and utilizing the standard power adjustable pedals. I like the audio steering wheel controls, but they take a little getting used to because the volume and presets are on the back side of the wheel, rather than on the top.

The interior of the Dodge Grand Caravan is about what you’d expect for a minivan. Simple, functional and plain. It is also comfortable, practical and intuitive. The test vehicle didn’t have the super console, and I appreciated the space between the front bucket seats to set my computer bag and purse. Each chair has an arm rest, which makes long rides a little more comfortable.

While I don’t love all the plastic on the center stack and dash, it is sturdy and durable, and that too serves a function when you buy a vehicle that is meant to be put through paces.

As you would expect from a family truckster, the Dodge Grand Caravan is chockfull of standard safety features. At the base Cargo Van trim, you’re looking at the all-important multi-stage front airbags, supplemental front seat-mounted side airbags and supplemental side-curtain airbags in all rows. Other standard items contributing to the overall safety include: electronic stability control, anti-lock 4-wheel disc brakes, LATCH-ready child seat anchor system and tire pressure monitor.

While the Cargo Van level comes nicely equipped with a tilt and telescoping steering wheel, heated exterior mirrors, rear grocery bag hooks and dual zone HVAC, you'll see a bevy of upgrades as you level up. Breaking down the various trims, here are some key add-ons that are included as you level up: 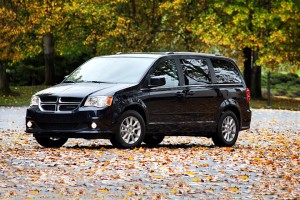 While I believe a minivan is a minivan is a minivan, have to admit that Dodge makes a darn good one. From the standard safety features to the class-leading optional features like second-row heated seats, Sirius Travel Link and heated steering wheel, Dodge delivers a functional vehicle that makes driving a minivan a little more palatable and, OK, maybe a little cool.

The fact that the rear-seat entertainment is a $1,300 option. Make it standard already!

One Response to “Dodge Grand Caravan”