7 Things To Know About The 2014 Dodge Caravan

The V-6 engine in the 2014 Dodge Grand Caravan is a force to be reckoned with. While I don’t love this same engine in the Chrysler 200, Dodge absolutely got the power equation right in its minivan. Since you’re in a minivan, people will try to pass you on the right, assuming you’ll go too slow. Just let them try.

The interior is well thought out. The placement of all the buttons and dials is within easy reach of a shorter driver’s fingers — even when pushing the seat back a little and utilizing the standard power adjustable pedals. The steering wheel audio controls are nice, but they take a little getting used to because the volume and presets are on the back side of the wheel, rather than on the top.

Everyone loves the Stow ‘n Go, which allows cargo to be stored out of sight. And excellent feature for storing shopping purchases you’d rather not reveal, or lots of messy kids’ sports gear and the like. Speaking of Stow ‘n Go, I was impressed with the enormous hidden cavity and its capacity to hold a vast amount of stuff. It can almost fit a small adult who needs a place to hide.

The test vehicle was equipped with what might be considered necessary optional equipment — especially in the family arena. The Entertainment Group No. 1 includes wireless headphones, a 9-inch screen and DVD player. Even without kids, I’ve driven enough of my friends to realize that the $1,300 option is worth every penny.

The interior of the 2014 Dodge Grand Caravan is about what you’d expect for a minivan. It’s comfortable, simple, functional and practical. Each chair has an arm rest, which makes long rides a little more comfortable. While I don’t love all the plastic on the center stack and dash, it is sturdy and easy to clean.

Dodge Grand Caravan is America’s most affordable seven passenger minivan with a starting price of $20,990

Along with its upscale twin, the 2014 Chrysler Town & Country, The Dodge Caravan is celebrating the 30th anniversary of the minivan. The 30th Anniversary edition will be available on SE and SXT models.

While the AVP level comes nicely equipped with a tilt and telescoping steering wheel, heated exterior mirrors, rear grocery bag hooks and dual zone HVAC, you'll see a bevy of upgrades as you level up. Breaking down the various trims, here are some key add-ons that are included as you level up: 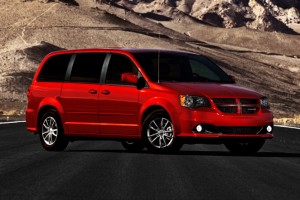 While a minivan shouldn't pretend to be anything other than a minivan, I have to admit that Dodge makes a darn good one. From the standard safety features to the class-leading optional features like second-row heated seats, Sirius Travel Link and heated steering wheel, Dodge delivers a good vehicle that makes driving a minivan almost cool.

The fact that the rear-seat entertainment is a $1,300 option. Make it standard already!

One Response to “Dodge Grand Caravan”