Family-friendly convertibles are hard to find, but the Chrysler 200 Convertible is about as close as they get. Unfortunately, aside from generous interior space and an attractive price tag, the 200 is ablaze with mediocrity.

The Chrysler 200 is the new version of the Sebring; if you’ve ever rented a convertible on vacation, you probably had the misfortune of driving one. It’s hard to make a convertible that isn’t enjoyable, but Chrysler certainly gave it their best shot with the Sebring.

For 2013, Chrysler has revamped, restyled and renamed the Sebring, with the hope that a new image will banish the bad memories. Though extensively improved over the old Sebring, the 200 Convertible still isn’t a great car. But if you’re looking for a proper four-seat convertible with a price tag well under $30k, this may be your best bet — although you’d probably be just as well off with a used BMW 3-series.

The old Sebring’s cheap plastics and fabrics gave it all the charm of a Wal-Mart store. Chrysler has made massive improvements; today’s Chrysler 200 Convertible may not be Bloomingdales, but it’s at least approaching Macy’s.

The Chrysler 200 is unusual in that it offers a choice of a cloth soft top or metal hard top. I’m partial to the hard top; it seals up as tight as a regular car when the weather is bad, and you don’t have to worry about thieves knifing through the roof to steal your belongings. Both tops are self-latching and can be raised and lowered with a single button — there are no latches to skin your knuckles or break your nails. Nice!

Convertibles generally make lousy family cars, but the Chrysler 200 Convertible does the job better than most. The back seat has plenty of space for car seats, although teenage kids might complain about the lack of legroom. (They’re teenagers, so they’re going to complain anyway.) With the top up, the 200’s generous trunk will accommodate Peg Perego’s biggest and best. Lowering the roof eats up most of the trunk space, although there’s still room for a baby bag and an umbrella stroller.

Safety-wise, the Chrysler 200 Convertible is a bit primitive: Front airbags, seat-mounted side airbags, and electronic stability control, but no side-curtain bags or fancy pop-up rollover-protection hoops like you’ll find in some convertibles. The 200 scored well in the Insurance Institute for Highway Safety’s front and side impact tests, but it has not been subjected to rear-impact or roof crush tests.

High-tech isn’t the 200’s strong suit; in fact, the tech-averse will be pleased to see an analog clock on the dashboard. One thing I really like is the optional navigation system, which uses the Garmin touch-screen interface — the same one you’ll see on Garmin’s inexpensive portable units. Automakers seem to have some sort of contest to see who can design the least-intuitive navigation system. Kudos to Chrysler for going to Garmin, the folks who do it best.

The Chrysler 200 Convertible offers a choice of 4- or 6-cylinder engines. I prefer the V6; it isn’t terribly fast, but it is smooth and quiet, a nice contrast to the buzzy 4-cylinder — which, thanks to its old-tech 4-speed automatic, is actually less fuel-efficient than the V6. The V6 gets a modern 6-speed automatic, but it’s dreadfully slow to kick down when you need passing power. The 200’s ride is smooth and quiet, but the handling is about as about as satisfying as sugar-free ice cream, with vague steering and a lot of shaking over bumps (a problem that plagues a lot of convertibles, but the Chrysler 200 is worse than most).

The 200 is offered in Touring, Limited and S trim levels.

Priced at $27,195, the 200 Touring is a very good deal for a four-seat convertible, especially one that includes power front seats, a power top, and automatic climate control.

The $32,190 Limited adds heated leather seats, a V6 engine, bigger wheels, and a better stereo; this is the trim level you'll have to buy if you want a hardtop or navigation. The S model, which is primarily an appearance package, gets fancier trim and a premium stereo for $500 more.

For this sort of money, you simply won't find a more family-friendly convertible. The $29,275 Chevrolet Camaro convertible comes close, but its top has to be strong-armed into place and it leaves a puddle of testosterone wherever it goes. 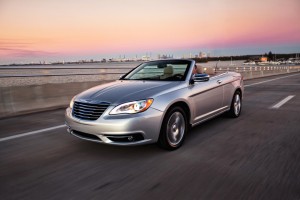 For all its deficiencies, the 200 Convertible is a great choice if you have a growing family and can't afford a BMW or an Audi. If you don't need the back seat, though, you might be happier with a Ford Mustang or a MINI Cooper.

It's a convertible! There is nothing like driving with the sun on your face and the wind in your hair.

Big back seat (for a convertible), decent value for money, fuss-free top operation.

Aside from the fact that the roof comes off, it's a pretty mediocre car.

One Response to “Chrysler 200”