Anonymous on the outside, functional on the inside: the Chevrolet Traverse may be the stealthiest way to haul a big family.

Let’s say you’re in the Witness Protection Program, and you need a seven-seat SUV that gets decent gas mileage and will slip unnoticed by the cronies of your ex-husband the mob boss, who is now serving fifteen consecutive life sentences because of your testimony. Well, Mrs. Gambino — er, sorry, Ms. Smith — have I got the perfect car for you: The Chevrolet Traverse.

The Traverse is one of three mechanically- and functionally-identical crossovers from General Motors, the others being the Buick Enclave, a shapely beauty styled like a slinky cocktail dress, and the GMC Acadia, which has a rugged anytime-anyplace-anyhow allure. By comparison, the Chevy Traverse is almost remarkable in its un-sexiness. Restyled for 2013 to be even more anonymous, the Chevrolet Traverse is nevertheless a fantastic vehicle that fades nicely into the background.

The first Chevrolet Traverse I sampled had a black interior with fake-looking wood trim. It was a dreadful combination that reminded me of a funeral parlor — not at all fitting for an ex-mob-spouse used to Mercedes and Bentleys. Once I swapped the offending Traverse for one with a light-colored interior, my outlook brightened considerably — I was able to appreciate the soft-touch dash (another new addition for 2013), the softly-contoured shapes, and the newly simplified climate controls. My Traverse also had an optional touch-screen stereo; the screen is bit on the small side, but it was easy to use and the sound quality proved to be perfect for the post-school-drop-off rock-out.

Have a gander at the photos up above, and you’ll notice two things: The long distance between the front and back wheels and the near-vertical cut of the rear doors. GM designed the Traverse for easy back-seat access, and those big doors make it easy to lean in and secure little munchkins into their child seats. Need to have a secret meeting with the Justice Department? No problem: Unlike most seven-seat SUVs, the Chevrolet Traverse has a third row seat that is almost comfortable for adults; access is easy since the second-row seats collapse and slide forward, although the mechanism in both the Traverses I tried was sticky, and I had to give the seats a pretty persuasive shove forward. Your friends the Feds might complain about the second-row seats, though; they’re a little short on thigh support, since the bottom cushion needs to be small in order to make that whole collapsing thing work. Still, they’ll find plenty of leg and headroom. Adjustable air vents in the ceiling ensure that all three rows get air conditioning, a nice touch that many SUVs omit. And with all three seats in place, the Traverse has 24.4 cubic feet of cargo space, enough for groceries, gym bags, and a tommy gun, though a bulky stroller will probably require folding down half of the third row. Fold both sides down, and the Traverse carries a moving-van-like 70.3 cubic feet.

The Chevrolet Traverse has six airbags, with an optional seventh airbag that is most unusual: It’s a center airbag, mounted along the edge of the driver’s seat, and it’s designed to protect the driver’s upper body and neck in an impact from the right side of the car. It seems to work well enough, since the 2013 Traverse scored both a five-star rating from the Government and a Top Safety Pick award from the Insurance Institute for Highway Safety. The Chevrolet Traverse offers a blind-spot warning system that warns you of traffic coming down the aisle as you back out of a parking spot. That’s a useful feature to have on a vehicle this big; unfortunately, it’s only offered on the top-of-the-line LTZ model. That said, all Traverses do get a backup camera — a must-have in a vehicle this large.

As of 2013, all Traverses get Bluetooth phone connectivity, a color touch-screen stereo, and OnStar, a subscription-based system that, among other things, uses its own built-in cell phone to automatically call for help in the event of an accident. The optional MyLink system uses your Internet-capable smart phone to provide apps such as Stitcher and Pandora radio, as well as GPS navigation. And as with most other large CUVs, the Chevrolet Traverse offers a rear-seat DVD player with wireless headphones.

The Chevy Traverse offers just one engine choice: A hard-working 3.6 liter V6 that puts out 281 horsepower (288 in the top-of-the-line LTZ trim). As big as the Traverse feels from behind the wheel, I’m impressed by how well it accelerates with such a modestly-sized engine. Fuel economy estimates are acceptable considering the Traverse’s size: 17MPG city and 23 MPG highway with front-wheel-drive, 1 MPG lower for all-wheel-drive.

The Traverse is designed for people who are downsizing from a giant SUV like a Chevrolet Tahoe or Suburban, and they’ve tuned the driving experience accordingly: The steering is light and the ride is comfortable, almost floaty. I expected the serene ride to come at the expense of handling, but I was surprised: The Chevrolet Traverse is surprisingly agile, and it turns quickly with very little body roll, a comforting thought should you spot a car-full of your ex-husband’s thugs in the rear-view mirror. But think twice before you decide to hide out in a mall parking lot: Parking the Traverse feels a bit like mooring a blimp, and the baddies are bound to spot you. 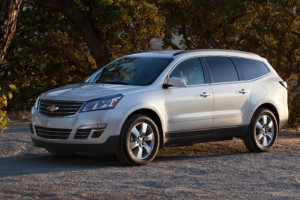 Okay, so maybe we aren't all trying to escape the notice of our ex-hubby's well-connected colleagues. If that's the case, I'm sure you'll find the Traverse just as functional, though the anonymous styling is less of an advantage. The Traverse's near twins, the Buick Enclave and the GMC Acadia, have more panache, but carry a much higher price tag. The Ford Flex stands out even more, but seats only six. My favorite in this class is the Honda Pilot. It feels smaller and tidier to park and has a more comfortable second-row seat, but those attributes come at the expense of third-row space and cargo room. For all-round room, comfort, and value, the Traverse is the way to go. And if anyone from the mob asks, I'll tell them you bought a Toyota.

One Response to “Chevrolet Traverse”