Chevy has a long history of building mediocre small cars, but the losing streak is broken with the excellent 2013 Chevrolet Sonic.

Chevrolet has a long history of building lousy small cars. From the wretched Vega of the 1970s to the hapless Aveo of recent years, buying a small Chevy has traditionally had all the appeal of contracting a social disease. To say I had low expectations of the new Sonic is an understatement — the way I saw it, anything above “dreadful” would be a major improvement — and about as likely as pigs taking flight.

So imagine my surprise when I experienced for myself just how good the new Chevrolet Sonic is. With its cute angry-eyes styling, roomy and well-trimmed interior, outstanding crash-test scores and an attractive low starting price, the Chevrolet Sonic is about as far from “dreadful” as a small affordable car can get. Here is a sentence that I expected to pass my entire career without typing: If you’re looking for a good set of inexpensive wheels, you really ought to stop by your Chevrolet dealer.

I was expecting the 2013 Chevrolet Sonic to offer one-star accommodations, similar to the old Aveo. So I was pleasantly shocked by the Sonic’s attractively designed and trimmed interior, done in fabrics and plastics far nicer than many entry-level cars. The switches and dials feel like they were pilfered from the parts bin of GM’s pricier brands, and the handsome two-tone dashboard is adorned with storage cubbies, including a double glovebox.

There is one slightly odd bit: The gauge cluster. It’s a plastic pop-art pod that looks more like something a twelve-year-old would use to operate his remote-control robot than an instrument panel designed for adults. It houses a huge engine rev counter plus a digital speedometer and fuel gauge. Weird, but I guess it works.

With my chiropractor’s business card close at hand, I braced myself to try out the Sonic’s back seat, and found yet another surprise awaiting me: The Chevy Sonic has more rear-seat legroom than most of its competitors. It’s no limousine, but you certainly won’t have to apologize to your adult friends for asking them to sit back there. Kids will fit in just fine, although maneuvering room to get an infant into a car seat is a bit tight.

Speaking of infants, the sedan’s 14 cubic foot trunk offers plenty of room for baby gear. Chevrolet also offers a hatchback version; its 19 cubic feet of cargo space is almost as much as the class-leading Honda Fit hatchback, but the cargo floor is smaller than the sedan’s, so bulky strollers may not make it.

The 2013 Chevy Sonic is brimming with safety: Ten airbags (including a pair for the front occupants’ knees), very unusual for a car in this price class, along with antilock brakes and electronic stability control as standard. The Sonic swept both the government and Insurance Institute for Highway Safety crash tests, earning a best-possible five-star rating in the former and a Top Safety Pick award from the latter.

The 1.4-liter Sonic, however, is a proper thriller. Although the engine is smaller, it has a power-boosting turbocharger. Horsepower is identical to the 1.8 at 138, but the torque (pulling power) is higher — 148 pound-feet vs. 125 for the non-turbo Sonic. That makes the 1.4-liter turbo version feel significantly faster, and its fuel economy estimates are much better: 29 MPG city/40 MPG highway with a manual transmission and 27/37 for the automatic.

The Chevrolet Sonic are tuned for a firm ride and sporty handling. I wasn’t overwhelmed by the 1.8-liter car — I would have preferred a softer ride, given the engine’s more humble disposition — but I thought the setup was a great match for the 1.4 turbo, which drives like a miniature sports car. And as of 2013, the Sonic can be had as a miniature sports car — there’s a new RS version with a lower stance, better brakes, and racy interior trim. It’s good fun on a curvy road and no less comfortable on the open road than other Sonics.

General Motors has kept things simple in order to keep the price down – meaning there’s not much to brag about here. The Chevy Sonic does come with OnStar as standard equipment. A subscription-based service, OnStar can provide turn-by-turn directions which are displayed on the stereo. If your Sonic is in a crash severe enough to deploy the airbags, OnStar automatically calls an operator who can use the Sonic’s built-in GPS sensor to pinpoint the car’s location and send emergency services if needed.


With prices starting at $14,995 for the sedan and $15,595 for the hatchback, the Chevy Sonic gives you a lot for your money: Air conditioning, ten airbags, alloy wheels, and an input jack for your MP3 player all come standard on the entry-level LS model.
But the value equation falls off a bit as the price goes up: The LT starts at $16,450 and adds power windows and a nicer stereo, while the top-of-the-line LTZ, priced at $18,060, gets bigger wheels, Bluetooth phone connectivity, and faux-leather seats.
1.4 Turbo models start at $17,050, and a top-of-the-line Sonic LTZ Turbo hatchback with optional sunroof tops out at $21,945 -- nearly $1,500 more than a Honda Fit Sport with an automatic transmission and built-in navigation. RS models can be optioned to well over $23,000. 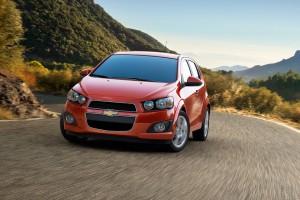 Here’s another reason to like the Chevrolet Sonic: It's made in the USA. Most inexpensive cars -- even those from American manufacturers (including Chevrolet) -- are built in Mexico or Korea in order to keep costs down, but Sonic is manufactured in GM’s home state of Michigan. General Motors should be applauded for keeping jobs in America during a time when we really need them. But there are reasons to buy Sonic other than patriotic sentiment: It's a great car, brimming with character, loaded with value, and (in turbo form, at least) good fun to drive. It's the car I never expected from Chevrolet. Now, if you'll excuse me, I'm going to sit by my window. I'm pretty sure a squadron of pigs is going to fly by any minute now.