The 2013 Chevrolet Malibu is quiet, comfortable and safe — but where’s the excitement?

Let me start by congratulating you for considering an American car — there are lots of buyers who won’t even look at them. Then again, with the economy where it is, can you blame them? Sure, American car companies have been working overtime to improve their quality, and today they are hot on the heels of the Japanese. I can’t blame anyone for spending their money on a sure thing like the Toyota Camry (or a value-laden thing like the Kia Optima). To win your dollars, the Chevrolet Malibu has to be better than the competition. Is it? Well, in some ways yes — but in other ways, no.

I can’t quite figure out the Chevrolet Malibu‘s interior. Several of my colleagues have said nice things about it, but it looks to me like it was designed by someone trying to learn Photoshop. How else can you explain the air conditioning vent that seems to stretch across half of the dashboard, or the instrument panel borrowed from the Camaro, which looks as out of place as edible panties at a church bake sale? Maybe my sense of design isn’t the best, but I just don’t get it.

Still, the quality of the materials is very good, and I like the control layout on the center stack. There are a lot of buttons for the stereo and air conditioner, but they are big and clearly marked, and the optional display stereo has a big, bright LCD screen with attractive graphics. It didn’t take long behind the wheel to feel at home in the Malibu, though I never did warm to the decor.

The Chevy Malibu’s backseat is fine for kids from infancy up through high school, but if you have young’uns (or adult friends) approaching 6 feet, they might start to complain — the Malibu doesn’t offer nearly as much legroom as competitors like the Toyota Camry and Volkswagen Passat. The trunk is great; at 16.3 cubic feet it’s one of the biggest and best, with plenty of room for overstuffed baby bags and giant jogging strollers. Keep in mind that if you by the Eco version, you lose about 3 feet of trunk space, although there’s still adequate room for luggage and baby gear.

This is one area where Chevy doesn’t fool around. The 2013 Chevrolet Malibu interior is home to ten airbags, a number normally reserved for high-end luxury cars. There are two in front, one side airbag for each of the four outer seating positions, a pair of side curtain airbags that cover the side windows, and two more to protect the front-seaters’ knees. No surprise, then, that the Malibu earned both a perfect 5-star rating from the Federal Government and a Top Safety Pick award from the Insurance Institute of Highway Safety.

But the 2013 Chevrolet Malibu goes beyond crash protection, doing a thorough job of crash avoidance: It offers an optional lane departure warning system, which alerts you if you begin to drift out of your lane, and a collision warning system, which beeps to get your attention if you are quickly approaching a stationary or slow-moving object. These features are common in luxury cars, but only now starting to appear in mainstream vehicles. And of course there’s the OnStar system, which automatically calls for help and transmits your location if the Malibu is involved in an accident.

The ‘Bu is offered with three engine choices. I drove the newest, a 2.5 liter 4-cylinder that produces a healthy 197 horsepower. I thought the acceleration was fine, but I was most impressed by how quiet the ride was — you could park next to a gunnery range and barely hear a thing.

EPA fuel economy estimates for the 2.5 liter engine are 22 MPG city/34 MPG highway, and if that’s not good enough, you may want to check out the Chevy Malibu Eco, which uses Chevrolet’s eAssist system — the so-called “mild hybrid”. While it doesn’t achieve the same results as a full-on hybrid system in the 2013 Toyota Camry, eAssist raises the EPA figures to 25 city/37 highway; the trade-off is that the battery pack shrinks the trunk to 13.2 cubic feet. The third engine wasn’t available at the time of writing; it’s a 259 hp turbocharged 4-cylinder engine that serves as a fuel-efficient replacement for the traditional V6.

If you like a relaxed drive, the Malibu is right up your alley, but if you prefer something a little more fun, you’ll find it to be a snoozer. The Chevrolet Malibu is tuned for a soft, comfortable ride, and while it’s wonderful for long highway stretches, it’s dull and uninvolving in the turns. Not that it handles badly; the steering is very responsive and the suspension handles panic swerves without losing its wits, but the fun-to-drive factor is pretty low.

If you have an Internet-enabled SmartPhone, you can use the Malibu’s optional MyLink system to access Internet radio apps like Stitcher and Pandora. MyLink does not provide Internet-enabled destination searches like Toyota’s EnTune and other competing systems, although the 2013 Chevrolet Malibu does come with OnStar, which allows you to connect to a live operator to help you find where you need to go — provided you pay a monthly subscription fee.

The 2013 Chevy Malibu is offered in LS, LT, LTZ and Eco trims. The LS model starts at $23,150 and comes standard with an automatic transmission, satellite radio, Bluetooth phone connectivity, OnStar, cruise control, and handsome alloy wheels. That's a lot of equipment, but the starting price is higher than strong competitors like the Kia Optima and Nissan Altima. Eco models start at $26,095, and a fully-loaded Malibu LTZ, with power adjustable leather seats, navigation, a sunroof, and keyless entry and ignition, can run well over $33,000. 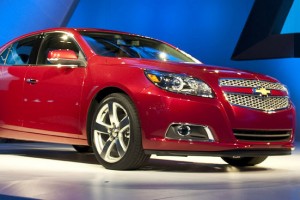 The Chevrolet Malibu is a very nice car, and I appreciate Chevrolet's dedication to safety -- that alone justifies buying one. And I like the fact that it's built by American workers in an American plant owned by American shareholders (and taxpayers). But what the Malibu lacks is pizzazz. Sure, it's quiet and comfortable, something I might appreciate more if I were in my seventies, not that people in their 70s deserve to be bored. For me, every drive is a potential adventure. (Visiting the grocery store with me is an experience like no other.) I like a car with a little more character and a little more energy, and the Malibu just leaves me a bit cold.

One Response to “Chevrolet Malibu”