Chevy’s mid-sized sedan gets a sculpted new bod, lots of fresh technology, and comes to market first with its fuel-mileage minded model. What’s not to like?

You may have preconceived notions about the Chevy Malibu, perhaps not all of them good. It may be the car your folks drove when you got stuck in the back with your brother – if not; your aunt and uncle probably had one. Or maybe it’s the boring sedan you always end up with at the rental car lot. Well forget all that, as the new Malibu deserves better than to be written off as another blandmobile. Mid-sized sedans have changed a lot since the days of your grandparents’ old Malibu. Check out the all new Toyota Camry, for example; or the smart-looking and smart driving Ford Fusion. Plus the snazzy Hyundai Sonata and Kia Optima, and the outstanding new VW Jetta and Passat. And if your shopping list includes any or all of these cars, it should also include the new-for-2013 Chevrolet Malibu Eco.

GM cars have, for years, been legitimately bashed for having cheap and cheesy cabins. The company’s product managers got the message and have aimed to deliver interior environments in which you’d actually want to ride. The new Chevrolet Malibu Eco has lots of room in all directions for five, and all of the materials and plastics appear handsome and robust. The buttons and switchgear are logically laid out and easy to find and use. The standard cloth seats are comfy and don’t feel like an old taxi’s. Leather seats are optional, and while the hide won’t match that of your best Gucci bag, at least it looks and feels like leather, not vinyl. Uplevel interiors have fake wood trim on the dash that no longer resembles shelf paper. All in, a roomy comfy cabin that’s not in any way a penalty box.

The Chevy Malibu Eco scores high in this category, with large, wide-opening doors, plenty of head room, and comfy seats, as mentioned above. And there’s plenty of room for junk in the trunk. All in, a car that everyone can get along with.

Plenty. The Malibu’s structurally rigid body structure is designed to maximize occupant protection, and there are ten air bags to aid in that goal; this is normally the airbag count you find in more expensive luxury models. The package includes the usual front and side impact airbags for the driver and front passenger, plus knee protection bags up front, plus roof rail bags to maximize rollover protection for all occupants. Plus there’s all the active safety stuff to help keep you from crashing and going boom; large four-wheel disc brakes with standard anti-lock, plus standard traction and stability control systems to keep you on the straight and narrow. The Chevrolet Malibu’s safety engineering and hardware is competitive with anything in this class.

Given that this car has the word “Eco” in its name, by now you’re probably wondering about fuel mileage. The official EPA numbers are still pending, but Chevy estimates a highway rating of up to 37 mpg, and a 25 mpg city number. Solid, but not spectacular in light of the 40 mpg that several others now achieve. But the Malibu Eco is a little less expensive to purchase than most of its competitors’ hybrid models, so you save a few bucks up front, and get maybe a few fewer mpg along the way. Plus Malibu has a more powerful engine than all of them, promising equal or better performance for near equal fuel mileage.

Piloting the Chevrolet Malibu Eco couldn’t be easier. It really does have plenty of power; which almost makes you wonder why more expensive, less economical V-6 models are really necessary. Your only hint that something is really different here is the start/stop function. It’s disconcerting at first; you brake to come to a stop and the engine dies. Then of course, it restarts the moment you take your foot off the brake, and all of this happens relatively seamlessly; no shaking or shuddering at shutdown as with some other models. There’s no stickshift available or necessary; your one transmission choice is a 6-speed automatic that works perfectly with the engine and eAssist hardware.

The rest is easy too; the car goes where you point it, rides smoothly, handles confidently and is also impressively quiet. GM invested in sound deadening; even the glass was specially developed to keep out loud exterior noises, like that big diesel tractor-trailer rig rattling alongside of you. Another big helper here is the amount of work that has gone into making the Malibu aerodynamically efficient – why should you care about aero? A car that glides easily through the air is quieter, and also gets better fuel mileage. A double score. You won’t confuse the Malibu’s driving experience with that of a more thrilling BMW or Jaguar, but you could buy two Malibus for the cost of a fully loaded import. The Chevrolet Malibu Eco offers everything you need to make your everyday commute easy, comfortable and safe. Like Dinah Shore used to sing in those back-in-the-day TV commercials: See the USA in a Chevrolet.

The Chevrolet Malibu Eco model’s biggest piece of technowizardry is called eAssist. It’s comprised of a system that effectively hybridizes the standard 2.4-liter, four cylinder engine. Another thing that eAssist facilitates is a start/stop function. Again, as with any Prius and most other hybrids, you roll up to a stop, and the engine shuts off. Take your foot off the brake pedal, and by the time it’s reached the gas pedal, the engine has silently refired. This also saves gas and reduces emissions. Although Chevrolet doesn’t market the Malibu Eco as a hybrid, it effectively is.

There’s also a choice of audio systems, an optional nav, and plenty of device connectivity on hand. Chevy calls its newest advanced connectivity system “MyLink.” It is standard on Malibu Eco, and it’s darn good. My Link’s focal point is a bright, clear seven-inch full-color touch screen, allowing you to manage the audio functions, which include Pandora and Stitcher internet radio systems. You can load in your own music via a flash drive or CDs, and if you don’t want to futz with the screen, call the shots via GM’s latest, enhanced hand-free voice recognition system. And it all works really well.

GM is launching the new Chevrolet Malibu first in Eco spec first. Other non-Eco and V-6 models will follow throughout 2012. The Eco starts at $25,995 plus a mandatory $760 destination charge. Refrain from pricey options such as moonroof and nav, and you can have a really well equipped example for less than $27,000. Stay tuned for the scoop on the rest of the Malibu lineup as the various model and trim levels are rolled out. 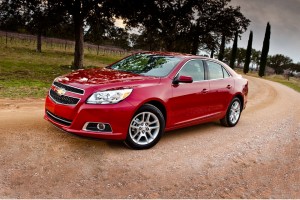 It’s taken long enough, but GM has finally made the Chevy Malibu a fully competitive player in the mid-sized sedan category. A nice car in every sense of the term, with segment-competitive quality, safety and technology. No longer the rental lot penalty box, but a car you’d actually want, and would spend your own money to buy.

A handsome, comfortable all around package that’s affordable, and easy on gas.

Near hybrid mileage for less money up front.

There’s no such thing as the perfect sedan, but nothing to hate here.