The Chevrolet Camaro SS Convertible does not require tight jeans or a tattoo, but it does require major attitude and a willingness to get a little rough with the stick shift. This is a car for Saturday night shenanigans.

If you’re in the market for a practical car that will save you money at the gas station and get you to work without a hassle, the Chevrolet Camaro SS Convertible is not your ride. If you’re looking for a car that will frighten the neighbors with the roar of its engine and impress teenage boys — including teenage boys trapped inside grown men’s bodies — with its muscle-car looks, then these wheels are for you.

The sport bucket front seats are wide — larger ladies are going to be very comfortable in this car and feel supported even when throwing it into a curve. Smaller women, though, will probably feel like they’re swimming in the driver’s seat. Luckily, it is power-adjustable and the steering wheel tilts and telescopes, so you can customize the fit a bit. The car’s beltline — where the top of the door sits — is high, so short women may feel like they’re peering out over the dashboard and doorsill.

The test car I drove had the flashy interior trim package, black leather with Inferno Orange accents and SS embroidered in the headrests. This might seem over the top in any other car, but it rocked in the Camaro. The black fabric convertible top did its job fine when up; there was a bit of road noise, but all you can hear is the engine anyway. The roof latch is a little tricky at first, but once you’ve used it a couple of times, it’s easy. Just unlatch, hit the button, and the roof automatically folds itself away in about 20 seconds.

Not at all family friendly, really. The rear seats are difficult to get into unless you jump in Dukes of Hazzard style, which I recommend. Once you’re in there, those back seats are not spacious, but the joy of riding top-down in a rumbling muscle car keeps passengers from complaining, at least for a few miles.

The 2013 Chevy Camaro SS convertible is as safe as any other car out there, with airbags all around, traction control, and tire pressure monitoring. It also has Brembo performance brakes, which can handle all the power the giant engine is putting through the wheels.

The number-one best gizmo in this car is the heads-up display, which projects information onto the windshield in blue. I had it set to show me my speed digitally and my RPMs in a virtual dial. Once the satellite radio was set to a station I liked, I never had to take my eyes from the windshield, except to glance in the rearview mirror at the tiny, slow cars I’d just left behind on the freeway. The Boston Acoustics stereo also has a USB port and auxiliary jack for devices, and eight speakers plus a 10-inch subwoofer.

I did all the things a girl should do in a top-down muscle car: I abducted my friends from their office jobs and took them for an afternoon cruise down main street, and I went to an outdoor concert with a girlfriend. Putting it in neutral at red lights and revving the engine menacingly makes passengers giggle, I noticed.

The clutch and stick shift were both pretty brutal; I skipped my triceps workout the week that I had this car. But the Chevrolet Camaro SS Convertible is the best of an American summer. If you grew up with muscle cars, the new design is to die for, and the engine sound — and performance — are top-notch. It’s easy to do some stupid-fast things in this car, but the technological refinements that have occurred in the auto industry over the past five decades have made it easier to pull the car back from the brink.

I wouldn’t want to have to wrangle this much power every morning, rain or shine, just to creep a few miles along the highway to get to work. But the Chevrolet Camaro SS Convertible would eat up a daily commute along country roads, or it would be just as happy to be garaged for the winter and pulled out for summer cruising and weekend road trips. In any case, wallflowers need not apply.

The least-expensie Camaro convertible is the LT version, powered by a more efficient but still powerful V6 engine; the full-bore SS that I tested has a big, bad wolf of a V8.

If you order the SS with an automatic transmission, the engine also has Chevy’s Active Fuel Management System, which shuts down four of the eight cylinders while you cruise the highway at a steady speed. The six-speed manual thinks saving fuel is for sissies. I’m not saying I agree; I’m just telling you what the car thinks. 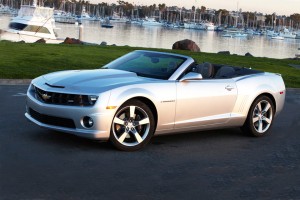 Driving the Chevy Camaro SS convertible is a reward for a long, monotonous day. It’s not the car for everyone or for every day, but it scratches a certain American muscle-car itch for open roads and big engines.

That rumbling muscle-car engine sound is music to my ears.

Heads-up display keeps your eyes where they should be — on the road.

The car is HUGE. Certified expert parallel parkers only.